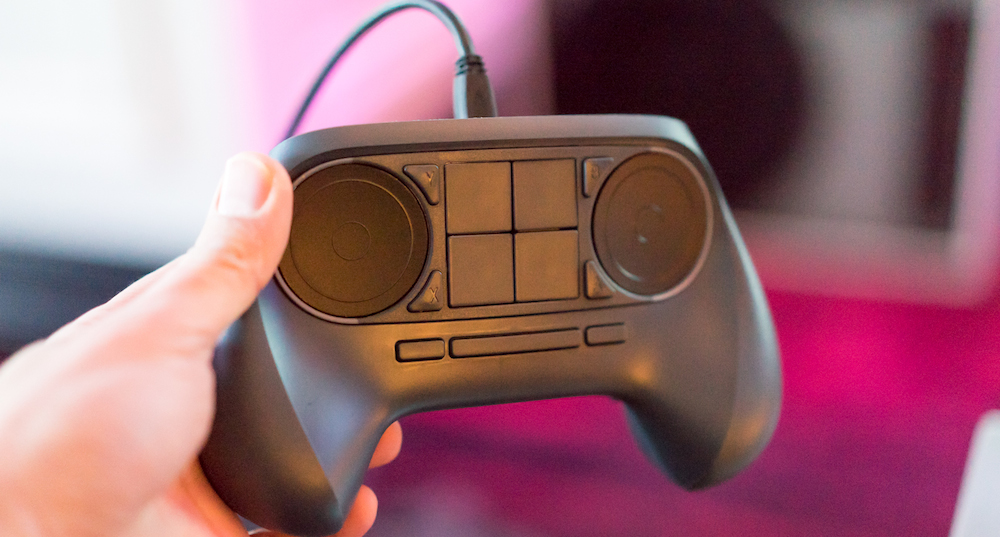 Getting used to it

Valve had plenty of Steam controllers for press to try following their press conference tonight at CES. I gave it a spin with several games, with varying success. I also played around with the UI a bit. Read on for my first impressions.

First off, those pads: Skimming your thumbs across the top of the controller pads has them working kind of like trackpads. That’s really neat to experience at first. But the controller pads are so sensitive. Soooo sensitive. I suppose the resolution is great for shooters (one for camera, another for aim), but I had trouble getting a feel for the precision I needed in these games. Walking around in shooters felt pretty good, but when any kind of precision pointing was needed (read: actually shooting), I felt like my pants were down a bit.

The pads are one big disc, and when you press down in any one area, they work as a button. The problem is that you don’t have a feel for where you’re pressing. Of course, the controller’s many buttons will let you remap to your heart’s content, but the issue is that none of the alternatives fall directly underneath your thumb like we’re used to.

There are bindings to play with, which makes middle grid and grip buttons ripe for customization. In the bindings screen we saw that you could also select community-made bindings for your game. There were some creative combos mapped for Portal, I found.

The typing wheel is neat, though I wouldn’t call it intuitive. The left stick has you moving to pick one of several 4-letter zones, with confirmation for one of the four coming from what you do with the right pad. Click down on the north, south, east, or west directions to pick a letter.

The UI was navigated by either the left pad, using it much like you would an analog stick on a console, or with the right pad, using it like a mouse, with one of the right triggers working like a mouse click. I found the latter method best for getting around the library. It’s just like surfing the web and clicking links. But the UI is kind of messy, and there are too many buttons. Jumping into navigation cold turkey, I found myself completely lost in trying to figure out which buttons do what.

If I had a few hours to get used to this controller, I’d be okay. I got used to Metro: Last Light and Portal enough to play them, but I never felt totally comfortable with them. I fared a bit better with platformers like Trine 2, though pointing took a bit to get used to. The bottom line for me is that it’s weird not pressing something. A shape. Something I can feel. I want buttons under my left thumb.

But, when that right pad is used as a mouse, it’s great. This would be a dream for couch surfing. For the left pad, I think it would take a good long time before I got used to it as a d-pad or analog movement control. If there were some way to attach an optional stick to the left pad, that would be neat.

The Steam Controller is a neat thing, and I definitely want one to play with. It does everything you need for PC gaming on your couch (save for fighting games, I’m guessing), so hats off to Valve for that. But I think it will take me a bit of time to get used to.