GDC, like most gaming conventions, is a chaotic endeavor where there’s virtually no chance that we’ll cover every game that we want to. Steven, Brett, and I all walked an average of ten miles a day as we dashed across San Francisco from appointment to appointment. My dumb ass even decided to wear nice, uncomfortable boots so that I could be Maximum Impressive. So, when I was about to take public transit back to Steven’s place to rest for a bit and he texted me, telling me to go to a Starr Mazer appointment, I briefly considered blowing it off and throwing one of my stupid boots through Steven’s kitchen window.

I’m glad I didn’t vandalize Steven’s house for a couple of reasons: 1) jail, and 2) because the Starr Mazer DSP appointment ended up being my favorite GDC moment. 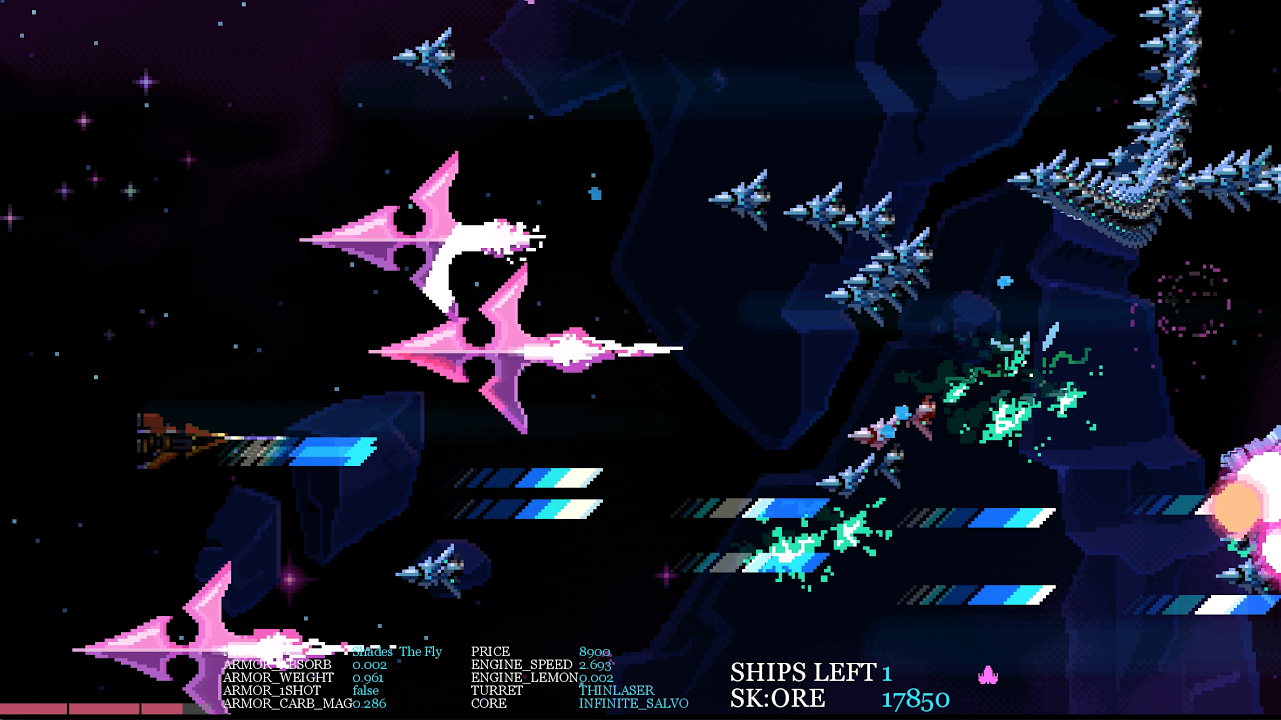 We’ve covered Imagos Softworks’ point-and-click/SHMUP hybrid Starr Mazer quite a bit here on Destructoid in the past: how Mega Man composer Manami Matsumae will be providing some tunes; how the game has gradually become a massive crossover; and we’ve even had the director, Don Thacker, on Sup Holmes. Yet somehow, I had never taken a look at it until I frantically Googled the title on my way over to the hotel lobby in which we were supposed to meet.

As I entered the hotel, I propped myself by the stairs and tweeted at the official Starr Mazer account: “directly in entrance, leaning on rail like Mr. Cool Guy,” hoping that was enough to help them distinguish me among a crowd of similarly white, similarly brown-haired, similarly bearded dudes (at least I wasn’t wearing the Games Writer outfit, the dreaded buttoned-up plaid shirt). Within a few seconds, Thacker approached me and asked if I was the guy. Both my shitty attitude and the cloud of fatigue wafting around me dissipated as soon as Thacker unleashed his enthusiasm in my direction.

He immediately began by machine-gunning me with information about his project as I struggled internally to take mental notes. “So, Starr Mazer DSP takes place centuries before Starr Mazer… there were two Great Wars… roguelike SHMUP… going for a Fallout Shelter before Fallout 4 scenario…” Perhaps sensing how overwhelmed I was, he cut himself off and said “You know what? Let’s go to our secret meeting hall and I’ll show you the game.” We began our journey deep into the guts of the hotel.

After ascending an escalator and going down an odd noise-vacuum of a hallway, we turned a corner and found two businessmen having a conversation about something worth more money than my entire life will ever be worth. Thacker pointed directly at them as if to reprimand children for doing something naughty. “You stole our secret meeting spot!” he admonished with furrowed eyebrows. One man was startled and started to get out of the spot when a whiplash smile etched itself across Thacker’s face. “Nah, I’m just kidding. It’s a good spot, though!” He grabbed one of their extra chairs as we went further into the hotel and found another table. After producing a laptop out of his bag, he placed it in front of me and began explaining the basics of Starr Mazer DSP. 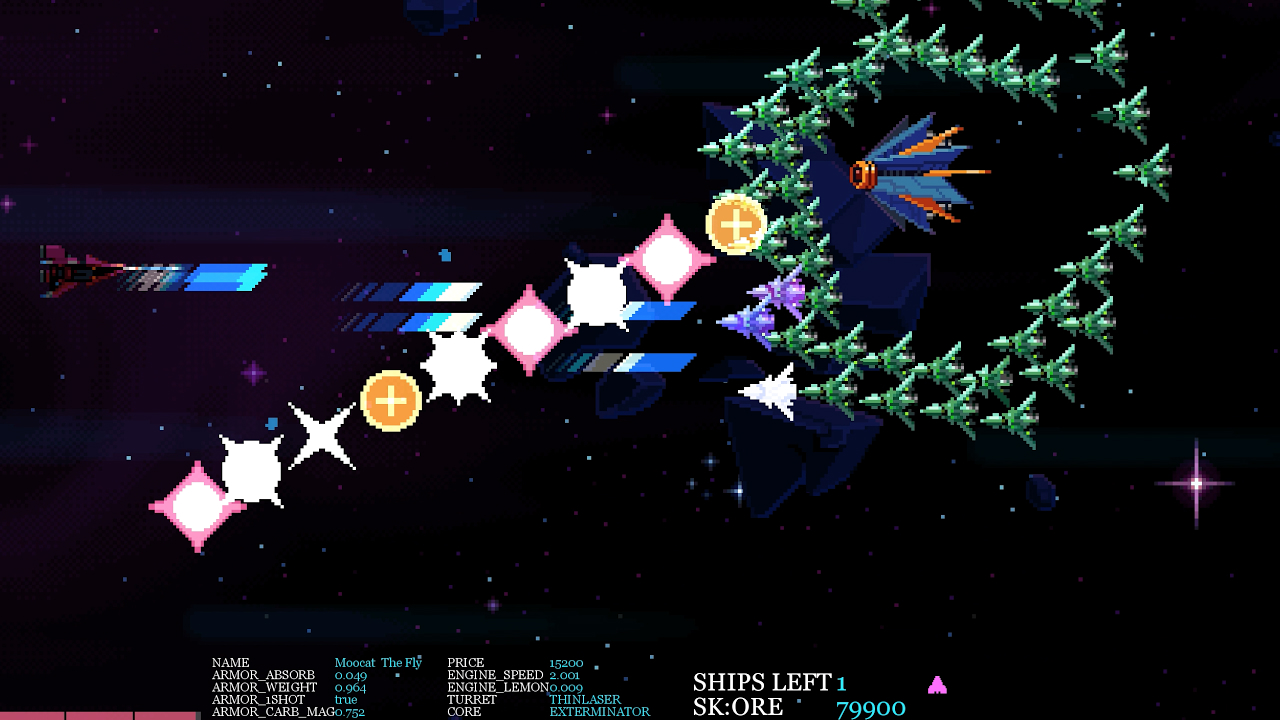 Every game starts by giving players a small amount of SK:ORE (Thacker laughs, admitting that he calls it that because he’s a nerd) with which to buy different pilots and ships. Each ship has different stats — as seen in the work-in-progress UI in the above screenshots — and different weapons. Though he gave me rapid-fire descriptions of each primary and sub weapon, I chose DEATH BLOSSOM and EXTERMINATOR because their names seemed the most destructive. I also chose an ability that allowed me to slow down time and weave through bullets like the graceful ballerina I am at heart.

In the bottom-left corner of the interface, there’s a bar cut up into three segments. This powers both primary and sub weapons. Using the sub weapon takes up one chunk, and diminishes the strength of primary weapons. I quickly learned to ration those powerful secondary weapons, but you can replenish them with SK:ORE, a substance that appears in the debris of your freshly-destroyed enemies. Instead of greedily swooping over every bit of the ore, I let it group up and combine into a big ball for a larger return. The danger in that, I soon discovered, is that if you allow the ore to grow too large, it can explode if one of your opponents blasts it.

With 80’s-style synth powering me, I destroyed wave after wave of enemies, with Thacker occasionally exclaiming “Oh man, it’s so cool to watch someone play this outside of the studio.” I eventually reached the boss, who shielded himself in a shroud of lower-tier enemies, and was defeated after an arduous battle. I immediately jumped in to try again, and Thacker was becoming noticeably more excited. “You want to do it again? You got really close. And you’re learning how to game the system with the ore!” Hell yeah, I wanted to try again. But this time, I had to adjust something.

I’m so used to my left hand controlling movement in games that I was having a bit of trouble acclimating to using my right hand to move with the arrow keys. I decided to cross my arms, using my left arm on the arrow keys and my right hand for everything else, much to Thacker’s amazement. “What are you doing? This is awesome.” After a few more tries, I hired myself an elite crew with my accrued SK:ORE (yep, the same stuff you pick up mid-game) and felled that bastard boss. Looks like I was the first one outside of the studio to do it, too, and Thacker awarded me with a high five that echoed through the hallway.

Kudos to @ZackFurniss, the first person to defeat the boss in our demo of Starr Mazer: DSP! pic.twitter.com/L2yxjUv6qH

Starr Mazer DSP seems like the perfect little bite to get people interested in the Universe that Imagos Softworks is creating. It’ll be coming out sometime this summer, and has an eye on both PC and mobile releases.

directly in entrance, leaning on rail like mr cool guy