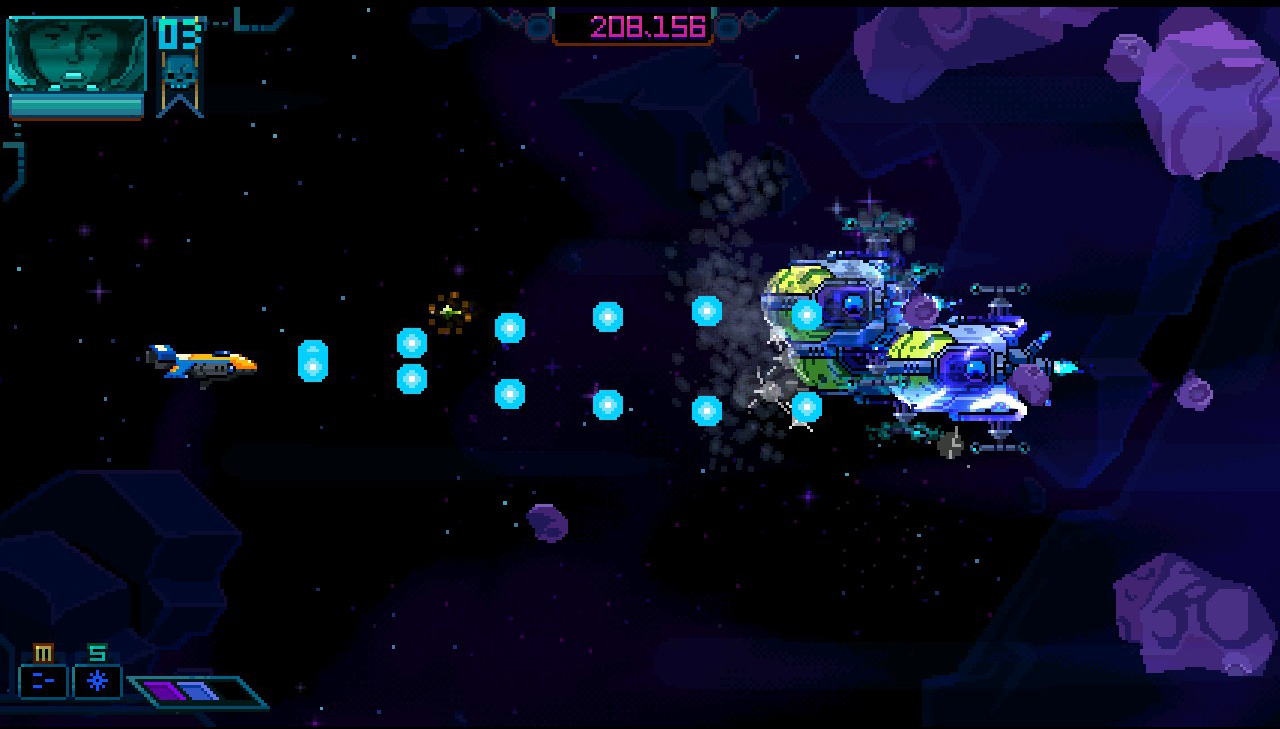 Hands-on with this shmup/roguelike hybrid

I wasn’t sure what to expect when I loaded up Starr Mazer: DSP for the first time. I haven’t played a shoot-’em-up game seriously since R-Type and Gradius III back on the SNES. After a surprisingly lengthy initial load, it booted up and I was ready to blast some aliens.

Starr Mazer was successful on Kickstarter in February last year, and will combine a traditional point-and-click adventure game with its shoot-’em-up segments. Starr Mazer: DSP is set in the same universe but focuses on the shooty goodness, with some roguelike elements added to the mix.

The first thing I noticed was the beautifully crafted pixel art. The developers call it “pixel pretty,” and it’s hard to disagree. Everything from the tiniest shot to the backgrounds and enemy ships is not only handmade, but gorgeous. The first few levels use orange backgrounds and teal enemies for the maximum contrast, but later stages switch up the color schemes quite a bit. Screenshots don’t do it justice, you really need to see this game in motion to understand how good it looks.

A lone spaceship moving from left to right blasting the crap out of everything in its path is a hoary trope at this point, so Starr Mazer: DSP adds some new wrinkles by melding its shmup core with roguelike elements. Each ship you play has different armament, which can have a dramatic influence on how you need to play. I favored a piercing missile weapon when possible, but spread shots, weak, screen-filling lasers, and balls that bounce from ship to ship are all available.

In addition to your primary fire, each ship has a secondary superweapon, and these are just as varied. Some max out your primary weapon’s rate of fire while granting a forward deflection shield, others shoot heat-seeking mines or offer limited protection from enemy fire by surrounding your ship with explosions, Last Starfighter style. 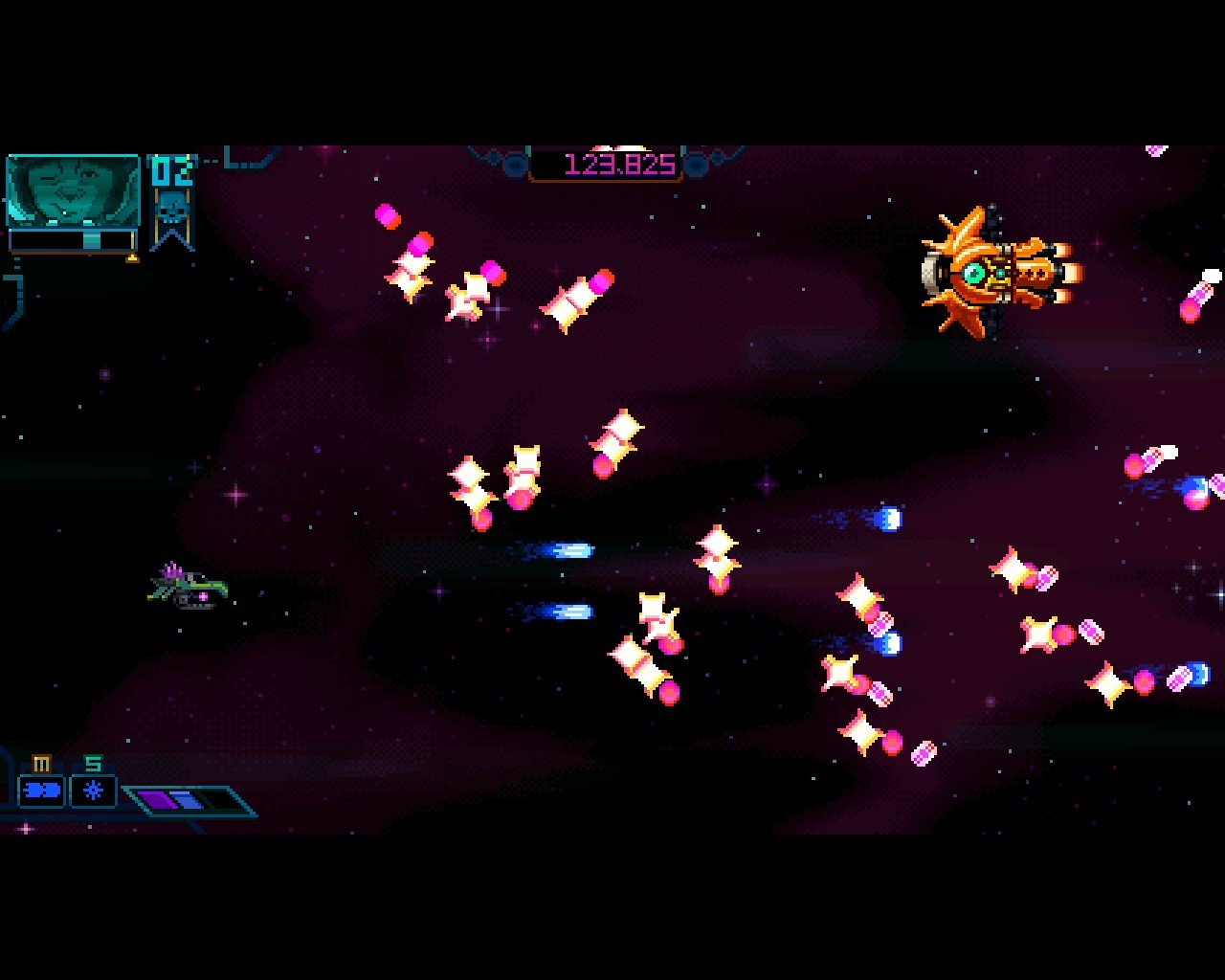 It’s Contra rules, for the most part — one-hit kills for both you and for the G’ell aliens you’re shooting at. Huge waves of weak fighters will come at you, with the occasional larger enemy that can take more damage thrown in to mix things up. At the top left of the heads-up display, there’s a portrait of your pilot, along with a bar with some sections lit up and an indicator that swings back and forth.

This works somewhat similarly to Gears of War‘s active reload; if you take a hit while the indicator is in one of the lit sections, you’ll get another chance rather than exploding and moving on to the next ship. When you do die, you can continue firing and moving for a few seconds to try and take out a few more enemy ships with a kamikaze explosion, and then the next pilot takes over.

Destroying waves of enemies will occasionally cause them to release a brownish chunk of ore called Carbomite. Collecting this boosts your score, and also fuels your primary and secondary weapons. The indicator in the lower left shows your power level, and each ship’s weapon gets a significant power boost at levels two and three. Using the special weapon can drain the gauge rapidly, so you have to balance using your special with how much ore you’re likely to get from destroying a wave. 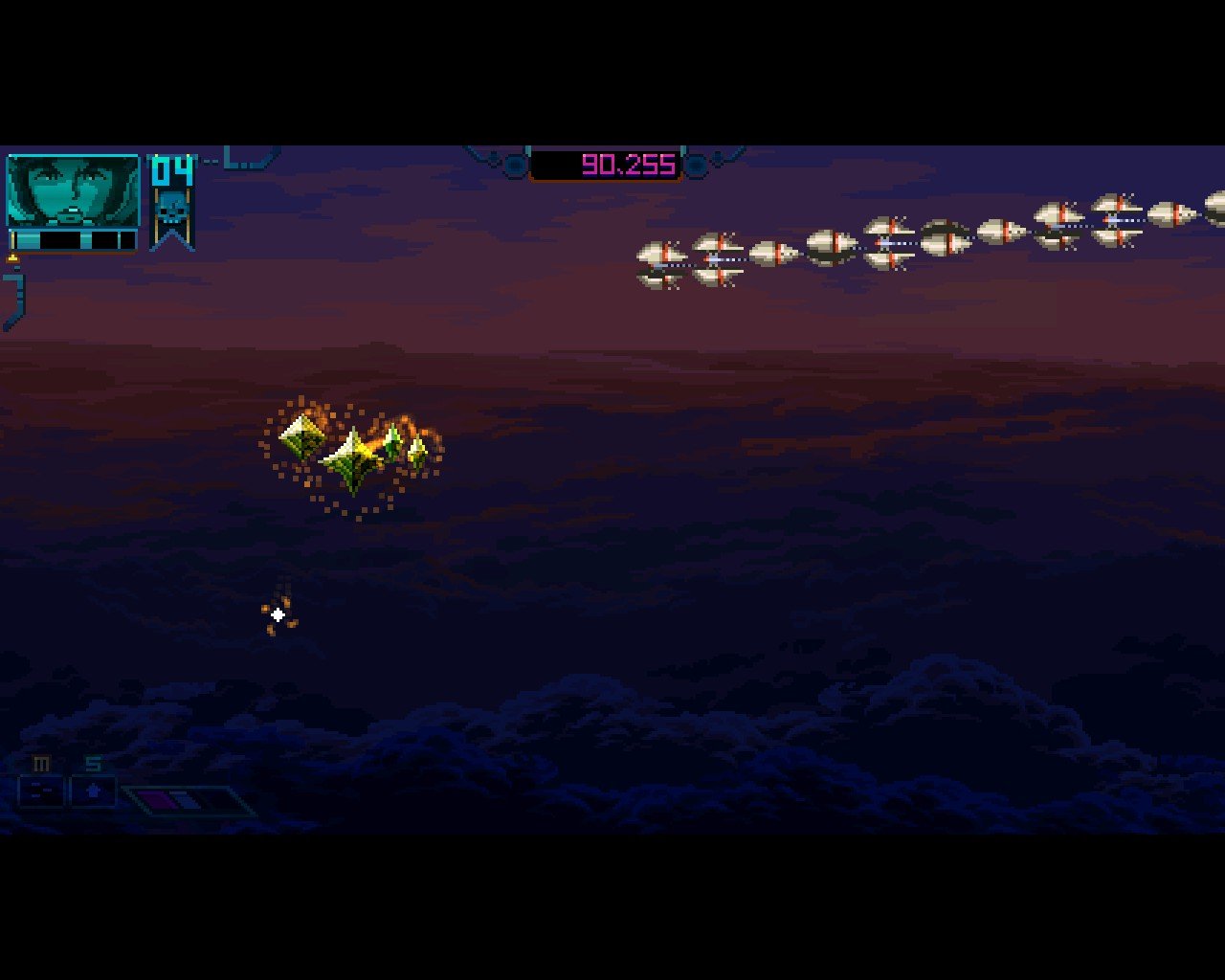 Each pilot has a different level of attraction to the Carbomite, and pilots with a higher level can cause it to orbit around their ship. This is handy because if two Carbomite pieces of the same size make contact, they’ll fuse into a larger chunk which fills the special gauge further, and is also worth more points. The largest chunk will fill the gauge entirely, but it can be hard to avoid the orbiting Carbomite long enough for one of these to form while also dodging everything the G’ell are throwing at you.

Your first playthrough is free, but once you run out of ships, you have to go back to the beginning of the game. You can use the SK ore (cute!) you’ve collected in your prior playthrough to hire new pilots for your next attempt. Each of these pilots is procedurally generated, with different weapons, different sweet spots on the free-hit gauge, and different Carbomite magnetism. I was also pleased to see that each had a procedurally generated name, and that these names appear to have been inspired by this Mystery Science Theater joke.

The first time I bought pilots, I went with Mach Steeldragon, Wing Omnicrush, Brawn Heavytread, and Hunk Fightmurder. Different pilots tend to be useful in different situations; for example, the piercing missile I was referring to earlier is especially handy in the asteroid field level, since most other types of shots won’t penetrate the rocks. 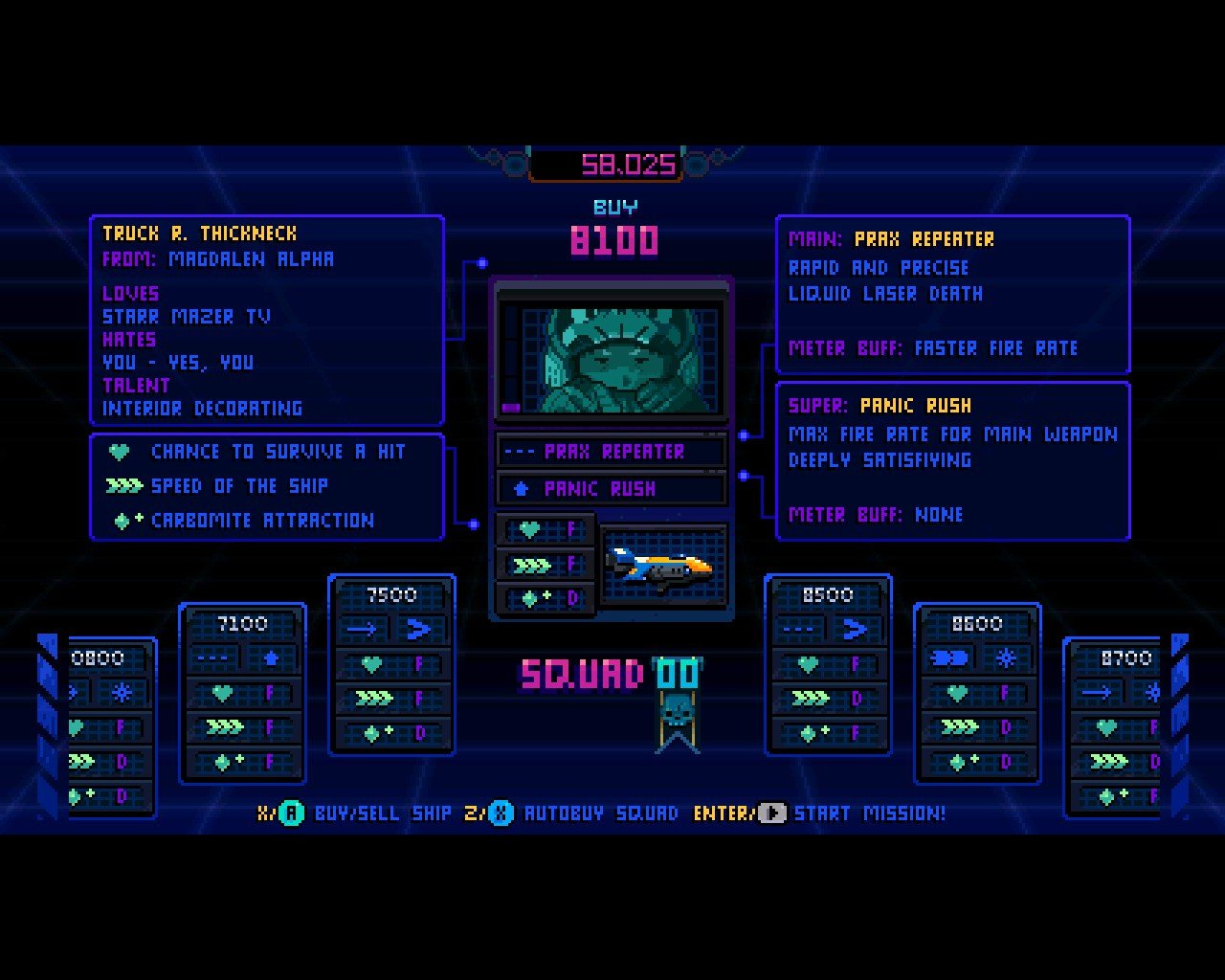 Once you’ve built up your score a bit, you can choose to spend some of it to gain access to much better pilots. You have the option to buy as many or as few pilots as you want, and it may work to your advantage to play a few games with weaker pilots to save for a later game so you can afford a full squadron of the better ones. The more costly pilots have better weapons available, and tend to have larger sweet spots on the free-hit gauge and better Carbomite attraction. Some even come with the free-hit gauge maxed out, but this goes away after they take a single hit, and then they’re at the mercy of the swinging gauge.

I’d be remiss if I didn’t mention the synthesizer-heavy retro-’80s soundtrack. I’m not sure who the composers are, but all of the music sounds authentic to the period they’re trying to evoke. Some tracks bring to mind the robotic guitar licks of Sega’s Genesis (Mega Drive) or the slap-bass and orch hits the SNES did so well. It all sounds great though, and it’s easy to imagine the tunes emanating from a late-’80s arcade.

Zack really enjoyed his time with Starr Mazer: DSP when he played it earlier this year, and having gotten hands on it myself, I couldn’t agree more. Shmup fans are in for a treat when they try this one out. Starr Mazer: DSP is now in Early Access on Steam, with a targeted fall release.

[This preview is based on a preview build of the game provided by the publisher.]