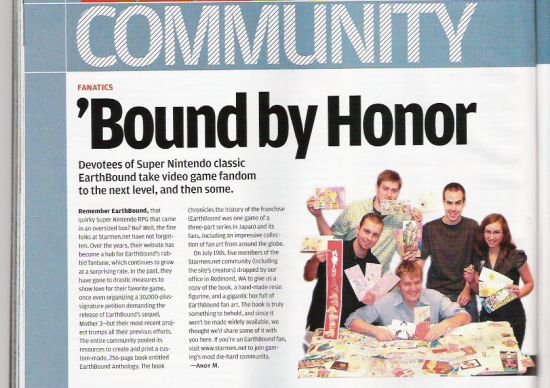 You guys already know the score — when there’s movin’ and shakin’ in the way of EarthBound or Mother news, I’m usually the nerd on call to give you the skinny. And since almost every ounce of movin’ and/or shakin’ these days comes by way of Starmen.net, their appearance in the latest Nintendo Power should come as no surprise.

In Seattle for the 6th annual Starmen.net convention, site admin Reidman and his crew made tracks to Nintendo of America’s Redmond headquarters to dump a metric ton of EarthBound– and Mother-related envelope artwork, a pretty swank Final Starman figurine and a load of copies of the EarthBound Anthology onto unsuspecting employees. The editors at Nintendo Power were pretty pleased and, plied with unique memorabilia and an outpouring of geek love, took Starmen to lunch at the headquarters’ Cafe Mario and talked about — what else — EarthBound. The result of all this bribery? A nice spot in the latest issue of NP. Good on you, lads. You deserve the ink.

There’s more, though: over lunch the discussion turned to EarthBound‘s forthcoming appearance on the Virtual Console. Some phrases and words were exchanged, and while Reid won’t print exactly what was said, he states directly that the editors at Nintendo Power conceded the following: should EarthBound sell very well on the Virtual Console, chances of an official Mother 3 localization will increase.

Sure, it’s by no means guaranteed, and this might just be the latest in a series of circumstances in which Nintendo of America has screwed with the piled-on hopes and dreams of Starmen.net and its devoted audience. But if EarthBound‘s VC sales truly have an impact on the company’s stance on further localization of the brilliant RPG series, it certainly couldn’t hurt. Plus, you were already planning on buying EarthBound on the VC — right? Yes, yes you were.