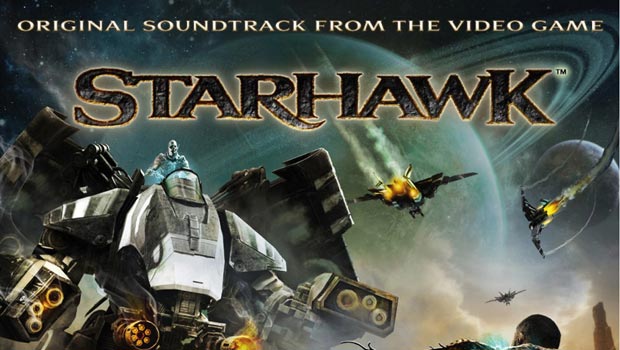 I guess the title says it all, but in terms of why you might care, I’m really digging the Starhawk soundtrack composed by Christopher Lennertz. It’s a great combination of gritty western ambiance with traditional orchestra. Sorcery is composed by Mark Mancina, and while I haven’t given it a listen, I’ve heard great things about it.

Both are now available physically and digitally from La-La Land Records. The physical editions of Sorcery and Starhawk are also both limited editions, so if you’re interested, grab ’em before they’re gone. Check out more details on both below.

From the creators of Warhawk, comes Starhawk, a bold new third person shooter adventure that provides fast paced, frenetic action set in the lawless frontier of space. Through the game’s unique Build & Battle system, players can instantly alter the battlefield by calling down offensive and defensive structures from an orbiting drop ship in real-time, all while blasting away at enemies in the middle of huge single-player or multiplayer firefights. Players have a host of weaponry at their disposal and a multitude of vehicles to choose from for high-speed, extreme combat combined with intense vehicular warfare on both land and air. The soundtrack features original music by Christopher Lennertz (Mass Effect 3, the film Horrible Bosses).

Christopher Lennertz is an award winning composer for film, television, and video games. He has already scored over 40 feature films, five network television series, and over a dozen video games. Lennertz has achieved high-success in a wide variety of genres from star-studded comedies to family films to action packed adventures. From his 1960s infused score for Think Like A Man to his comedic score for Horrible Bosses, Lennertz’s adeptness for a multitude of genres has put him on the map time and time again.

His knack for comedy is undeniable through films like The Comebacks, The Perfect Holiday, and the cult classic spoofs Vampires Suck and Meet the Spartans. He’s also contributed his unique brand of humor to several hit family films including Alvin and the Chipmunks, Hop, Marmaduke and Cats & Dogs: The Revenge of Kitty Galore. Furthermore, he’s tapped into the indie world, scoring critically acclaimed films like Alfred P. Sloan winner Adam and Tortilla Heaven, which garnered him the very first Film Music award for Best Independent Film Score.

Along with television and film, Christopher Lennertz is celebrated for his video game scores with major sellers like Steven Spielberg’s Medal of Honor, James Bond 007: From Russia with Love, Quantum of Solace, and Gun. Most recently he scored Mass Effect 3 for PlayStation 3; it was the third and final installment in the games’ series.

“From the beginning, I wanted to make sure that no matter how intense the action got,” said Lennertz, “the player would be immersed in the world of Starhawk and really become the character. The melodies had to tell the story, and the sound had to create a sonic universe that was unique and unmistakably Starhawk.”

Sorcery puts the power in the players’ hands using the PlayStation®Move motion controller to conjure and command powerful magic as they brave the dark world of the Faerie Kingdoms. On their journey, players will encounter a multitude of enemies, solve ingenious puzzles, learn powerful spells, and craft strange potions immersing them in a unique fantasy adventure like never before. As a young sorcerer’s apprentice named Finn, it is up to the player to master the arcane arts and fight back the the Nightmare Queen who has broken the ancient pact with mankind and threatens to cover the land in eternal night.

Born in Santa Monica, Mark Mancina began his musical training at an early age focusing on classical guitar, classical piano and composition. His scores frequently feature his own performances on piano, guitar, bass, percussion and drums, highlighting unique sounds harvested from a personal collection of traditional, exotic, and custom instruments from around the world.

His credits composing the original score for August Rush, the story of a musical prodigy’s search for his parents which culminates in a Central Park concert featuring Mancina’s “Rhapsody No. 1 in C Major”, Camille, Shooter; co-scoring the CBS primetime drama Criminal Minds; and co-composing the new Walt Disney Pictures logo. Other projects include the Oscar-winning Training Day for which he provided a benchmark score that expanded the boundaries of scoring street-wise drama and is widely used as a temp track, while his breakout score for Speed influenced the sound of subsequent action movies. His scores for Twister, Bad Boys, and Moll Flanders are among his favorites.

Though primarily a film composer, Mancina jumped at the opportunity to work on a video game. He said, “To my surprise, it was really an opportunity to flex my melodic side while being as creative and non-derivative as I wanted. What a shock! And, at the same time, a gift.”

Starhawk and Sorcery are both available exclusively for the PlayStation 3 computer entertainment system. The La-La Land Records Original Video Game Soundtracks for Starhawk (Christopher Lennertz) and Sorcery (Mark Mancina) will be available at www.lalalandrecords.com and other soundtrack boutique retailers on May 22nd and via Amazon and other general retail outlets on June 19, 2012.