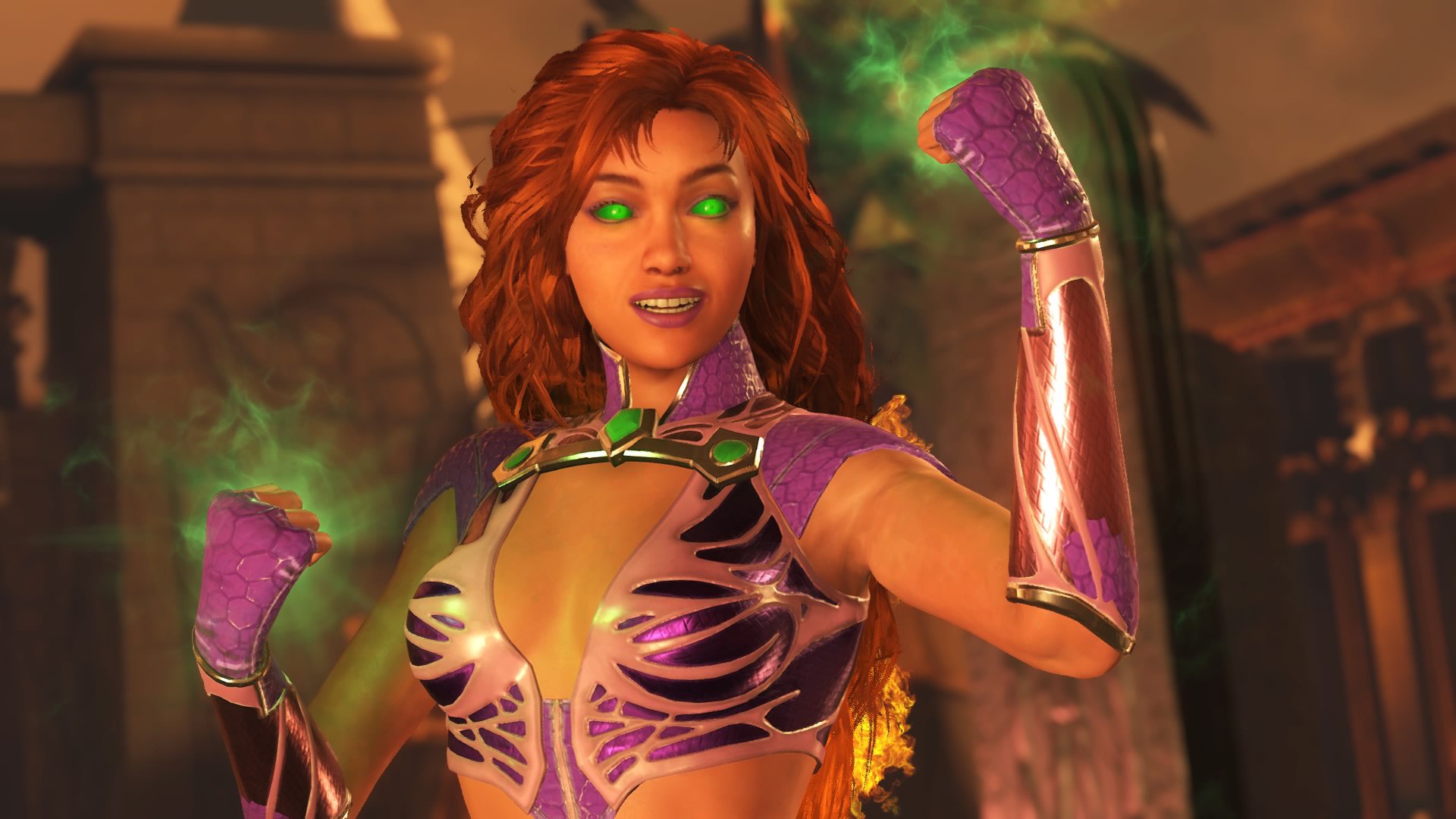 Heating up the roster

Some characters need to work for their dinner. No matter what you think about tiers in fighting games or what makes a “good” or “bad” character, there is no denying that some are just plain harder to use than others. They can take a higher degree of execution to perform, they can have weird moves that require a lot of time and practice to master, or they can have complicated playstyles that take a certain level of creativity to really work.

Starfire isn’t a character who is necessarily overpowered. Instead, I’d prefer to use the term “straightforward.” I don’t know if we’ll be seeing her tear up the tournament scene anytime soon, but she’ll definitely be terrorizing couch games and online sets for months to come.

Looking at her movelist, it’s easy to call Starfire a zoner through and through. Most of her special moves seem designed to push the opponent back, peck away at their health, and make it hard for them to get anywhere near her. She has a quick fire ball that can be used both on the ground and in the air, and can be meterburned to follow up with a machine gun style blast of shots. She has a kind of arcing fire ball that can create explosions in different areas of the screen, perfect for stifling an advancing opponent, and it can also be meterburned to create a slow moving orb as an obstacle. And her trait, the one-button unique special power every character gets, is a frickin’ laser beam. The beam travels instantly across the screen, catching anything in its path including ducking opponents (very handy for punishing players trying to wriggle in after dodging a regular fireball).

But, her special moves only tell half the story. In truth, Starfire is a hybrid character who is almost as dangerous up close as she is from full screen.

While projectile characters are generally balanced by having poor tools in a toe-to-toe fight, Starfire is actually pretty solid up close. Call it the privilege of royalty, but her normals feature a suite of safe(ish) combo strings with decent (if not exceptional) high/low mix-up potential. Adding to that, she has a variety of normal moves that are just super handy. She can shut down jump-in attacks with a quick upward blast that sets opponents up for a juggle, and her jumping heavy attack creates a panning laser beam perfect for easy cross-ups, which synergizes nicely with her (slightly floaty) air-dash.

Pick up the controller, play a few matches, and it’s pretty easy to put together a competent gameplan with Starfire that will win you matches. It might not be flashy, but it works. She’s kind of like the Honda Civic of fighters.

The thing is, for as straightforward and easy to pick up as Starfire is, she still has an additional layer of advanced techniques you can dig into. Dirty shenanigans, like using her orb after a knockdown to create an obstacle behind an opponent as they get up. More complicated cross-up gimmicks that can land full combos. You can kit out that Honda Civic with some ground effects and a big stupid spoiler if you want.

So Starfire is good. She’s a totally complete and viable character. That said, I can’t help but think she’s also a little dull. Sure, she has her own flavor, and Teen Titan fans will likely enjoy her intro quotes and costume options. But as far as her playstyle goes, I can’t really tell what sets her apart from characters like Green Lantern and Superman, who already mix heavy zoning with strong normals. At some point you have to ask, does Injustice 2 really needs another character spamming laser beams?

I’m not coming at this from the perspective that projectiles are cheap, or boring, or whatever. Zoning is fine, it’s just a matter of diversity when it comes to how people play the game. When you step back and look at the cast of Injustice 2, about two thirds of the characters implement some kind of strong projectile element into their game. Whether they are pure zoners like Deadshot and Dr. Fate, or hybrids that mix screen control with an up-close game like Batman and Captain Cold, many matches in Injustice 2 feature characters standing at opposite ends of the screen flinging energy blasts or bits of metal at each other. Even as someone who loves the game, I can’t help but notice it gets a little samey after awhile. Starfire doesn’t help with that problem, she’s just dumping more fire on the fire.

Hell, even when you look at the rest of her kit apart from her fireballs, Starfire feels a little redundant. Her air-game is very similar to Superman and Supergirls thanks to the incredibly similar air-dash, her orb gets used the same way Fate’s does, and she’s not even the first roster member to shoot lasers as her character power. She’s new, but she’s not fresh in any way. You would hope a princess would shine a little brighter all things considered. I realize Starfire was always going to be a projectile-heavy character with similarities to other roster members given her powers, so I don’t really fault the character herself. But, of all the possible candidates to choose from in the DC universe as possible DLC fodder, did we really need another energy shooting, flying, heavy-hitter? Even just looking at the Teen Titan lineup, someone like Beastboy would have been a more interesting choice. This isn’t even thinking of all the weirder, wilder possibilities like Plastic Man, Constantine, or any other non-laser powered characters you care to name.

Starfire represents the completion of Injustice 2’s first fighter pack. There are two more packs and six more characters to go – here’s hoping we’ll see a bit more variety in the months ahead.