Essentially, it’s Shadowrun, but set in space. I’m perfectly fine with that

Juggernaut Games’ Kickstarter-funded sci-fi dungeon crawler StarCrawlers went into Early Access on Steam just a couple of weeks ago and seems to be doing quite well for itself based on the positive Steam reviews posted so far. Even in this unfinished state, the game feels respectably polished and, for the most part, free from any serious bugs that might get in the way of its fantastic dungeon crawling gameplay.

Since before the title’s launch on Early Access, I’ve been chipping away at the game in my spare time, leveling up my crew of four, and exploring what the Early Access build has to offer. Now that I’ve had some time to familiarize myself with it, I’d like to share my impressions.

The adventure begins as you approach a lonely-looking, ramshackle space station that’s obviously seen better days. Your pilot notes that the clumsily modified hulk that you’re preparing to dock with is Terminus IX, the hub for this particular sector. After docking, your companion suggests talking to the local barkeep who runs the Wire, a service with which people like yourself, Crawlers, look to when seeking out work and information.

If you’re familiar with Shadowrun, explaining what Crawlers do for a living isn’t really necessary. For those who aren’t, though, Crawlers work as agents for the highest bidder, taking on jobs such as asset recovery, commercial espionage, and mayhem for hire. These are just a few examples of a Crawler’s specialties — and, of course, all of them are done with the understanding that your shadowy employers will deny any and all knowledge of your existence.

Once you’ve selected your starting character class and made contact with the cybernetically augmented barkeep, Doc Sam, he’ll agree to help you find work, as well as offering to supply you with potential recruits to fill out your roster, but first, he needs your help getting the Wire back online. Here begins the game’s tutorial section where you’ll be tasked to seek out a necessary component for the system in the bar’s basement.

Played from the first-person perspective, movement is controlled with the WASD keys, as well as with Q and E, which allow your characters to turn left and right. While it might seem somewhat self-defeating to do so in a grid-based game, you can also hold down the right mouse button while the cursor is centered on screen to control your point of view, allowing you to look around and move more freely while exploring the map.

As you traverse the game’s first dungeon, the tutorial runs you through some of the basics, such as how to assign skill points and also demonstrates how characters can use their class-specific abilities that allow each to interact with certain objects in the environment, such as an Engineer’s ability to disarm traps. 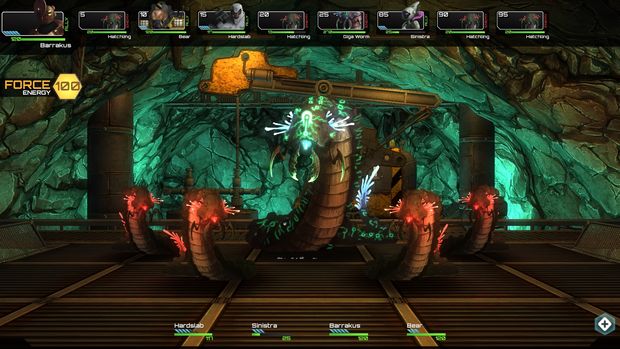 Once combat is initiated on the dungeon map, the game enters turn-based mode with a fixed view of the area of the map that you were exploring serving as the background and enemies will be arranged in front of you. Depending on who has the highest initiative, that character or enemy will get the first turn. Once your turn becomes available, you’re free to select whichever enemy you’d like to attack first.

Using the mouse cursor, you’ll select your target and hold down on the left mouse button to bring up an ability “wheel” where you can select from a variety of attacks or combat-focused skills. Each skill or ability comes with an associated cost when using it. These are referred to in the game as Time Units, which seem to serve the purpose of Action Points.

Once a character’s special ability has been used, their next turn will be ordered in the initiative lineup appropriately. Also, certain abilities come with a cooldown period and can’t be used again until a specific number of turns have passed.

The next mission available after completing the tutorial section is where you’ll discover your first party member, the Prototype. Once you’ve got the deadly but sometimes unpredictable robot back up and running, it will become available in Doc Sam’s for recruitment. It’s a solid ally, with signature abilities like Aegis Mode that can analyze groups of enemies mathematically, predicting their next move, oftentimes resulting in the Prototype launching a preemptive attack before an enemy can carry out its own. 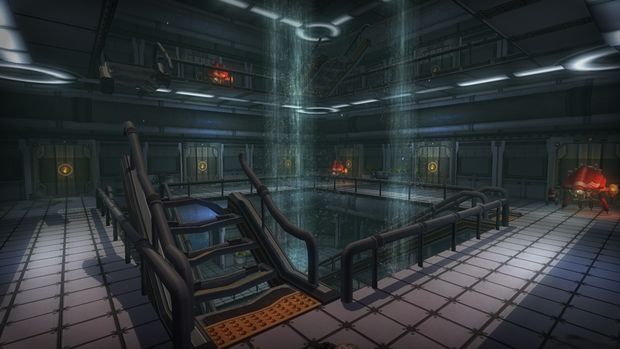 After taking on one or two more jobs from the Wire, you should have enough credits to start building your team. Over the course of the game you can recruit all of the various classes, but you are limited to a maximum of four teammates that you can bring along on each mission.

There are seven available classes to choose from, each with specific strengths and weaknesses but all seem to be capable enough to get you through until you can recruit the Prototype for some much-needed additional firepower. I won’t go into detail on every class, but if you’d like to find out some basic information on each, you can do so on the game’s character page, which is available on the official website.

However, for the sake of example, I will discuss briefly detail one of my favorite classes to have on any team, and that is the Smuggler. This class is noted as being comprised of shady individuals but with a reputation for getting the job done. Smuggler’s leverage their skills in dual-wielding pistols, Akimbo style, to lay down a hail of bullets with an increased chance for critical hits and deal 150 percent of your equipped pistol’s damage when the Akimbo skill is leveled up; and, at times, will spread that damage out over multiple enemies which is hugely beneficial when you begin encountering larger mobs. 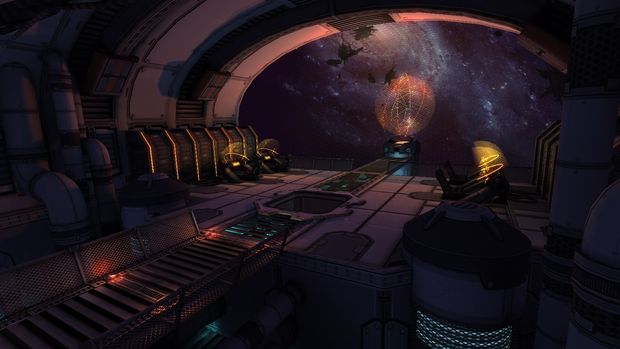 While I’ve talked about some of the game’s more important systems, you’re probably curious about how much content the Early Access version includes at this stage of development. Currently, only the prologue of the main campaign is fully playable alongside procedurally generated side missions. However, it should be said here that these side missions are a great deal of fun to play around with all on their own.

They provide the perfect playground for players who enjoy grinding for better loot and, of course, offer ample opportunity to rack up the necessary experience points to level up your team of Crawlers, expanding their expansive skillsets and allowing for extensive experimentation with each class before the title leaves Early Access in the coming months.

As StarCrawlers‘ Early Access continues to move forward, the developers will be introducing additional campaign chapters through sequential updates, as well as tweaking and fine-tuning the game’s existing systems. New character abilities are also planned to be added as well as new enemies, events, and mission types. For the curious or hardcore fans of the genre, there seems to be a great deal to look forward to as things progress.