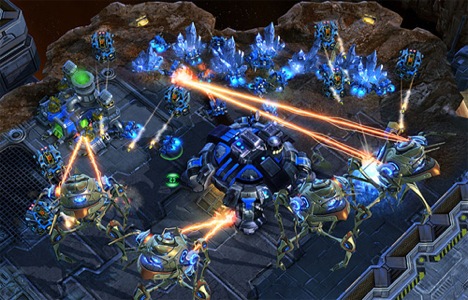 Blizzard co-founder Frank Pearce recently sat down with VG247 and talked a bit about the potential of a fourth race in StarCraft II. Pearce points out that the development team talked about a fourth race early in development, but decided that adding one in would squash some of the new ideas that Blizzard wanted to implement with the game.

We talked about the possibility of a fourth race early on, but we felt like we had a finite amount of great ideas and wanted to make sure we focused all the cool, best ideas on the existing three races rather than diluting those ideas across four races

Earlier in the discussion, Pearce said that Blizzard doesn’t “have the resources or time to add a fourth race to the launch” of StarCraft II, but doesn’t rule out the possibility of having one in an expansion pack. In fact, he was sure that another race is a “feature that’ll come up for discussion” whenever Blizzard decides to roll one out.

Personally, I think StarCraft II is the epitome of playing it safe. I’m not seeing anything truly remarkable from Blizzard from this title, and I am slightly disappointed. I never really got into the original game, but I would be more willing to check out StarCraft II if I saw something exciting like a new race tossed into the mix.