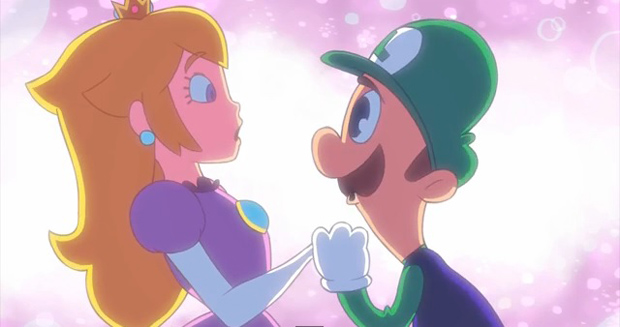 Starbomb is the adult-oriented, videogame-themed supergroup of EgoRaptor, Game Grumps, and Ninja Sex Party, and it’s here to rock your face off. The above video, “Luigi’s Ballad,” is the first single from the self-titled album, available today on all your digital download sources, and it’s a pretty good indicator of what you’ll hear on the full album. There are plans for more animated videos, with EgoRaptor’s obviously being the first.

The albums thirteen tracks run through classic games and characters such as Pokemon, Legend of Zelda, Kirby, and Mega Man, and throws in a bunch of dick jokes. While the concept itself may seem a bit juvenile, the awesome music (provided by Ninja Sex Party) and hilarious situations are more than enough to keep the more “mature” fan entertained. Some favorites include the above video (featuring comedian Rachel Bloom as Princess Peach), a song where Simon Belmont keeps interrupting Dracula and his pals while they try to have a party (“Crasher-Vania”), Kraid’s inability to battle Samus because he never knew she was a girl (“Regretroid”), and the self-explanatory “Rap Battle: Ryu Vs Ken.”

The album is available on iTunes, AmazonMP3, Spotify, CDBaby, and physical copies are available via the band’s merch page from their website.