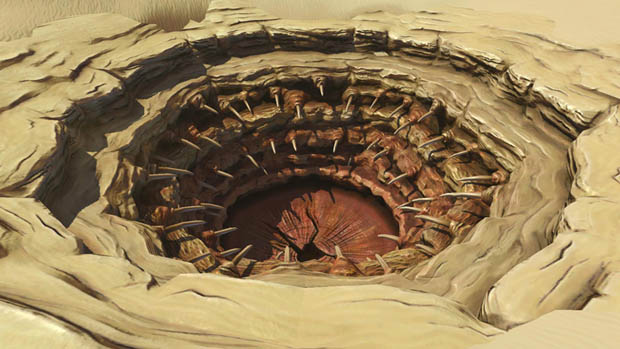 Think you know everything about Bioware’s upcoming MMORPG Star Wars: The Old Republic? Think again. In a surprise announcement, an additional class has been revealed – the Sarlacc Enforcer.

If you’ve ever complained about how much goddamn WALKING all the classes in World of Warcraft and other MMOs require, the Sarlacc Enforcer is for you. Sure, you could take a gryphon to Thunderbluff and waste 6 minutes of your life, expend valuable energy chatting in general to find a warlock to port you to Outland, or wait an entire minute for your flight power to recharge. FORGET IT. Skip all the terrible traveling time sinks that plague those other games by selecting a giant immobile pit in the ground as your character class. Sure, it might sound boring, but once you realize the PvP potential of a virtually invisible/invincible class that can slowly digest every other player in the game, you might rethink your character creation choices.

The fact that this news is being released on April 1st is a TOTAL coincidence. We all know Bioware takes games seriously, and I can’t imagine they would make some joke class announcement like all those other MMOs out there. (A two headed ogre that requires two people to control? PLEASE.) If for some reason you want to play one of the more mundane, boring, mobile classes, you can look at the complete list here (don’t worry, they’ll be updating it with the Sarlacc Enforcer shortly).