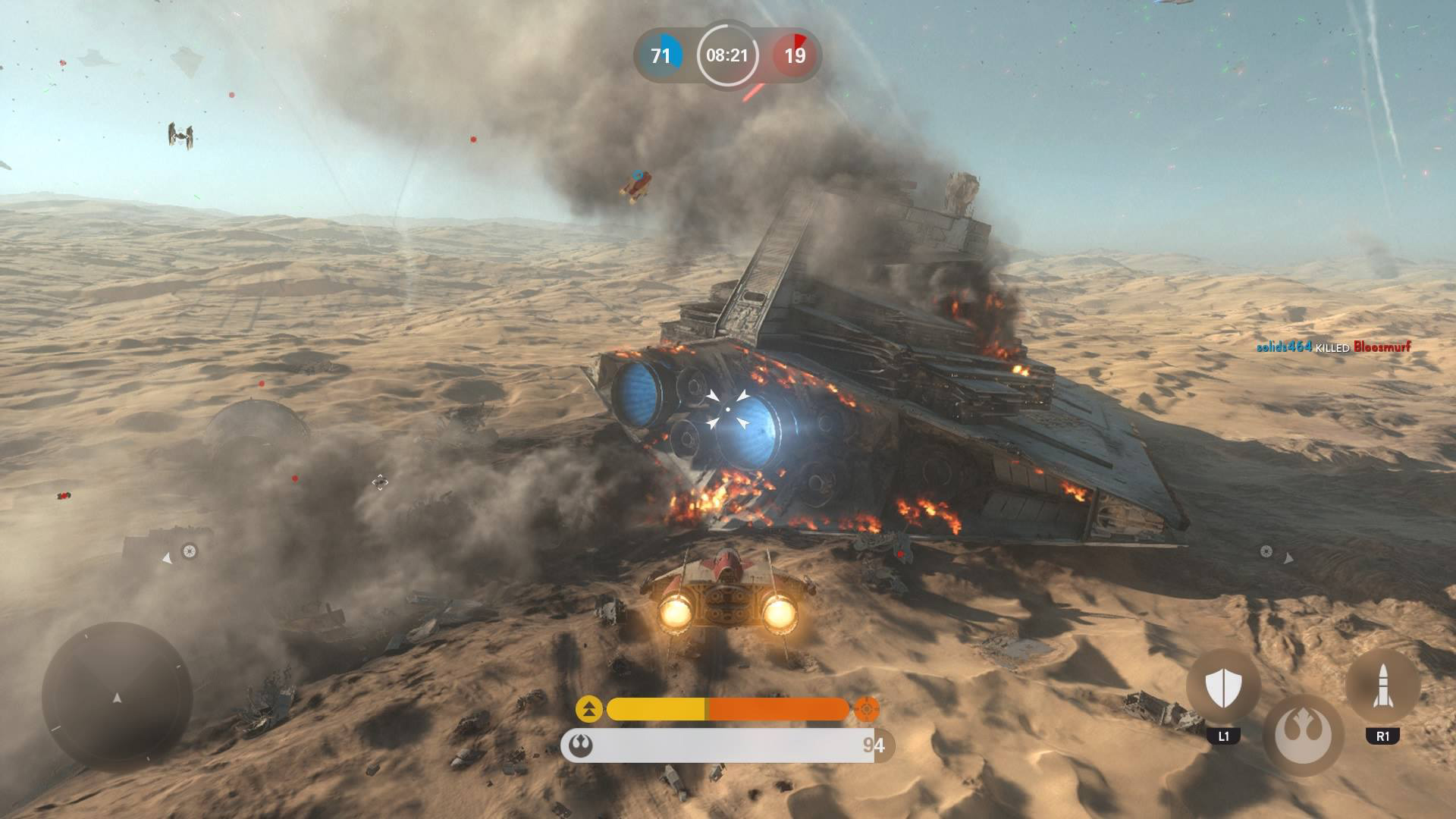 But at least it’s free

While The Battle of Jakku hasn’t seen a wide release yet (that’s happening on December 8), the free new DLC is now available for folks who pre-ordered the game.

It’s two new maps and a mode set on the war-torn planet of Jakku, which will also appear in The Force Awakens (albeit many years later, hence that decrepit Star Destroyer from the movie trailer).

The big draw is Turning Point, a 20 vs. 20 mode that has the Empire on the defensive. It’s only playable on one of the new maps, Graveyard of Giants, a locale full of sand dunes littered with wrecked walkers and ships from the skirmish above. It’s a cool sight. The stakes feel high.

Playing on the Rebel team, you need to rush forward to capture one of three control points. Doing so will push the Empire forces back, opening up more control points off in the distance. This cycle repeats a couple of times, culminating in a single, final control point that’s challenging to take. 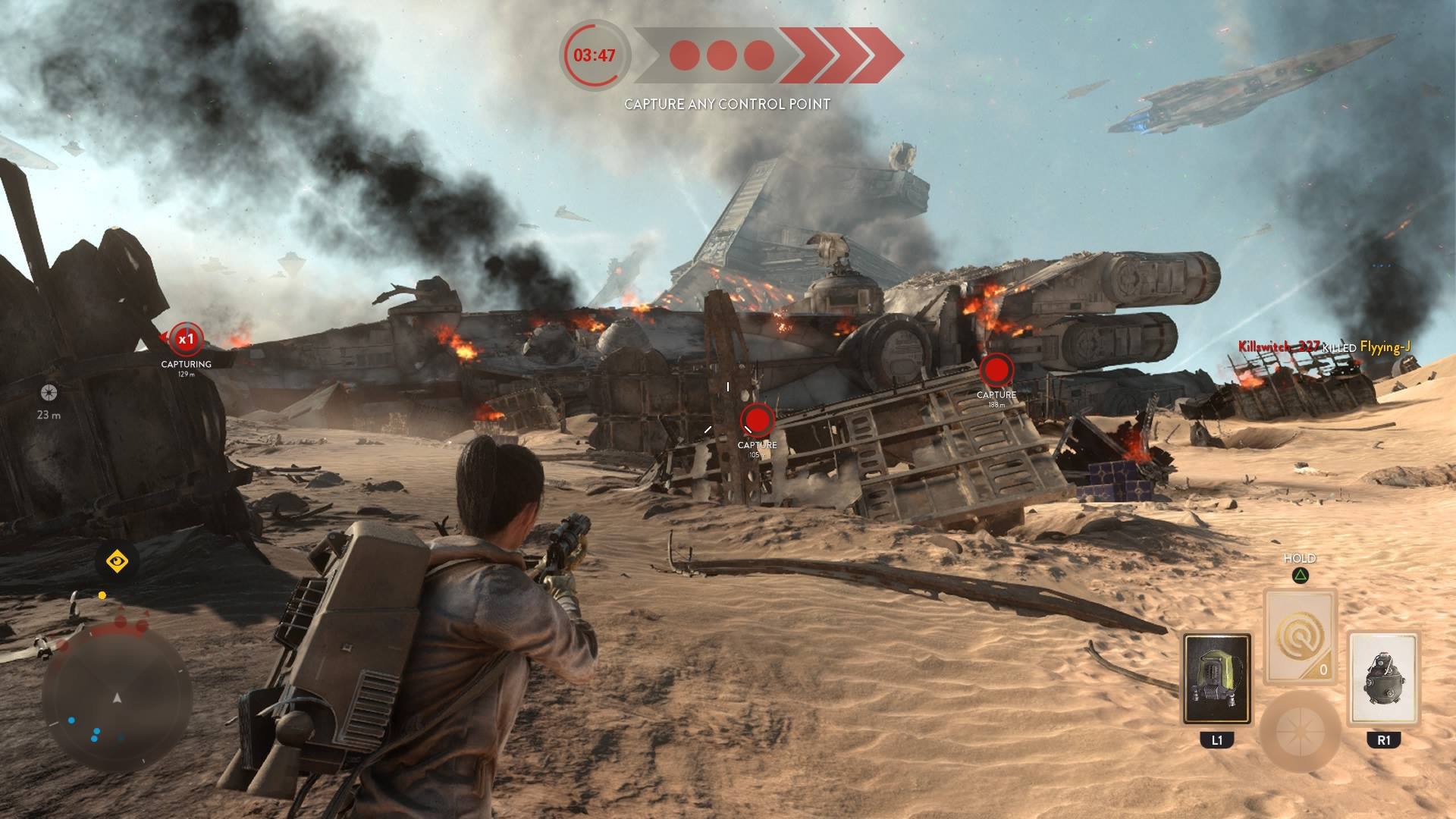 On paper, I like this format. The Rebels can split up to capture multiple points and hope that one group will succeed, or they can go all in on a single point and bombard the Empire with brute force. They just need to secure one control point to progress and add more time to the clock.

Problem is, the map is so large and open that, moment to moment, you’re going to spend a lot of your time in Turning Point simply running — often to your immediate death, whether it’s by regular well-aimed blaster fire or a rifle headshot or a lock-on explosive or an AT-ST.

That’s … not fun. And I can only imagine what the trek is like without a Jump Pack to speed things up. Even on the Empire side, it’s a similar story. You’re still jogging, only with the intention to defend.

As much as I like how the map looks, I found myself wanting to play the existing modes instead.

Unfortunately, I had a hard time finding matches set on the other map, Goazan Badlands (though the situation will surely improve next week when everyone can play). It’s the smaller of the two Jakku locations, meant for more intimate modes like Blast, Drop Zone, and Hero Hunt.

Determined to at least try it once so I’d have something to say, I ended up going through every single mode, one by one, with that filter in place. No such luck. Almost everyone with the DLC is playing Turning Point on Graveyard of Giants, it turns out. And I don’t blame them! It’s new and looks exciting. Battlefront is sorely in need of new, well, anything.

Eventually, my filter method worked, and I managed to get into a mostly full room of Heroes vs. Villains on Goazan Badlands. It’s less sand dunes and more rockfaces, with tight corridors strewn around a clearing in the middle. I’m a fan of the layout. The winding pathways and wreckage provide great opportunities to stalk your prey, seek refuge, or take up a vantage point. It’s not the most imaginative location in Battlefront, aesthetically speaking, but I like it just fine.

That’s my general reaction to The Battle of Jakku so far: it’s all right. I like that it’s free, and I like that it’s more content. We could use more of this stuff to keep the community engaged and coming back to the game. There’s an easy-to-reach toggle to include/exclude the DLC from matchmaking and, for what it’s worth, I’m keeping both of the new maps in my rotation.