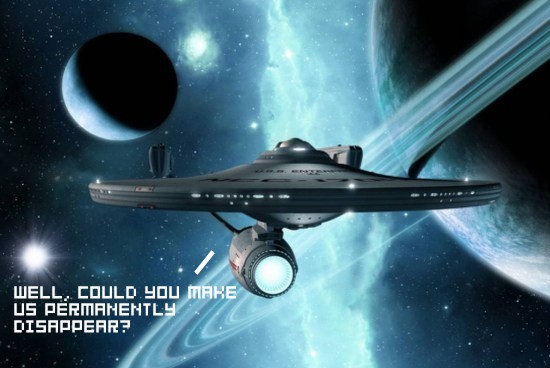 Things have been looking generally stormy for Perpetual Entertainment for months now. The announcement earlier this year that the studio had chosen to cancel their nearly completed MMO Gods & Heroes came after the announcement of a “restructuring,” which is the kind of word used in business when everything is about to go down in a rain of hellfire and ash.

Shortly after, they announced Star Trek Online was going to become a more “casual” MMO, which only further implies confusion, as Trek is one of the most detailed universes out there to explore. The most recent debacle in the series is a suit filed by Kohnke Communications against Perpetual, which alleges “breach of contract, fraudulent transfer, intentional interference with contract, and fraud.”

“Kohnke, which was hired by Perpetual in early 2007 to conduct a public relations campaign for Gods & Heroes, signed a contract worth USD 15,000 per month. However, for a seven month period, USD 10,000 would be withheld each month under a unique compensation arrangement.

Kohnke would be paid back the USD 70,000 plus an incentive of up to 400 per cent of the withheld monies, or USD 280,000, based upon the number of subscribers 90 days after the game’s shipment date.

On October 9, Perpetual announced that Gods & Heroes had been placed on indefinite hold.

Kohkne alleges that it was not paid for all of its work, and was unaware of Perpetual’s financial situation until it received a notice of assignment for the benefit of creditors. It further alleges that Perpetual transferred assets for less than market value, intentionally interfering in the contract by causing or worsening Perpetual’s insolvency, resulting in the cancellation of the game which would have earned Kohnke money under the incentive plan.”

Dear, dear, dear. Why do I get the twinge of feeling in my gut that there may be no Star Trek Online, either? Considering that Kohnke is seeking compensatory damages in the range of $80,675 to $290,67, this can hardly be good for the budget. Perpetual has 30 days in which to respond to the lawsuit,  so we’ll keep you posted on any further developments, although it seems to me the best course of action for them would be to find a wormhole and vanish to the far corner of the universe.

[Via GamesIndustry.Biz — Thanks Justin!]