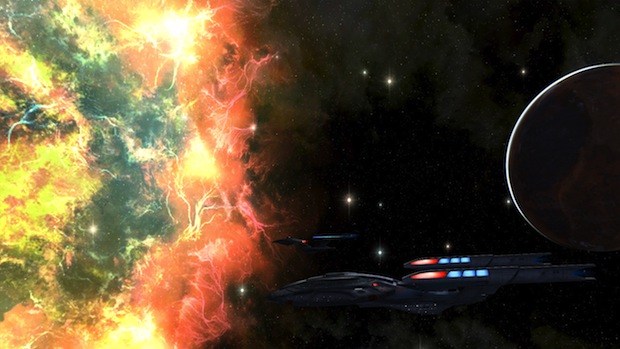 When Cryptic Studios thinks about Star Trek Online a year post-release, they’re not sure what they’ll see. Content in the long-term is not being planned.

In a recent interview, I asked STO associate producer Velasquez a simple, but complicated question: when he thinks about STO a year post-release, what does he see? How about three years? A decade?

Their crystal ball isn’t broken or battered — it just isn’t necessary. The studio plans to lean on the MMO’s players in decisions concerning later content rather than stuffing all their Tribbles in one basket.

“Right now, honestly, we’re focused on launch and what follows,” he told me via e-mail. “Making a long-term plan is great, but so much of what we do will be determined by our fans and users that much of the plan won’t be applicable.”

“So, we’re obligated to take a wait-and-see approach if only so that we can better appease our player base,” he continued. “Why bother planning out ten or even one year’s worth of work if the first thing out of everyone’s mouth is going to be, ‘Don’t do that?’”

Additional content is coming, but Cryptic isn’t ready to talk about what it is.

“We’re definitely going to be adding content across the board. Nothing we can really delve into, though.”