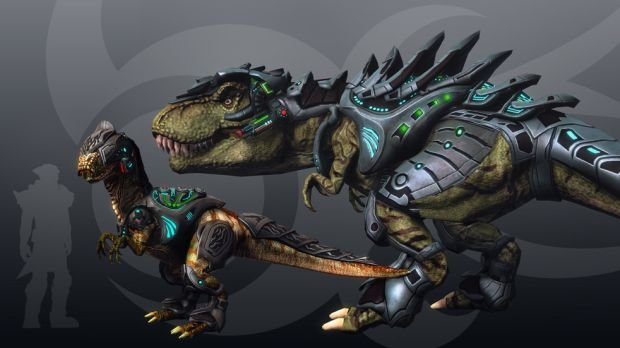 I must confess: Star Trek: Voyager was my “gateway” Star Trek. So no matter how bad you tell me it was – or how bad I realize it was, the adventures of Captain Janeway and the crew of the Federation starship Voyager will always have a special place in my heart. That’s why the “Season 8” content update for Star Trek Online has me hyped, as it involves a fun Voyager callback.

According to the STO blog, for Season 8 developer Cryptic are planning to get players involved with the Voth, an obscure Delta Quadrant race from Voyager‘s 3rd-season episode “Distant Origins”. While the episode itself was little more than an allegory for religiously-motivated “debates” over evolution and creationism, the “lore” takeaway was that the Voth were descended from Earth’s dinosaurs, which, naturally, will lead them to HARNESS THE POWER in-game via T-Rex’s with “Antiproton Beams and Transphasic Chroniton Mortars” on their heads. Lovely.

Players less enamored with Voyager or ancient sauroids might be placated by the setting of Season 8, which takes place on the inside of a Dyson Sphere, a massive sci-fi structure enclosing an entire star. The sphere will serve as Star Trek Online‘s first “Space Adventure Zone”, and the hub for most of Season 8’s content.