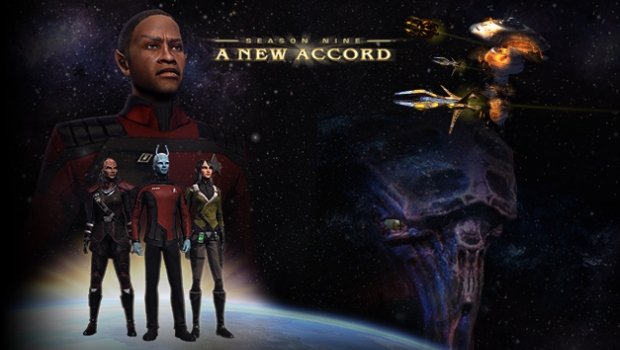 Did you like Star Trek: Voyager? I know I did. And from the looks of things, Cryptic Studios does, too, as the newest big update of Star Trek Online titled “Season 9: A New Accord”, involves quite a bit of content straight from the Delta Quadrant.

The update, which has just gone live on the servers, introduces new episode missions featuring Tuvok from Voyager (voiced by Tim Russ himself), and new zones where players can band together to fight off the Undine, a race of three-legged CGI freaks known in the show as Species 8472. Playable Undine starships and Undine-inspired gear have been added, as well as events involving everything from destroying Undine superweapons in orbit to conducting investigations to uncover shapeshifting infiltrators. Fans of STO miffed about its ongoing storyline of war between the Klingons and Federation might even be chuffed to find that that very war may be coming to a close. Of course, the resulting peace is probably more the kind of lull you get when factions declare truce to fight a bigger threat, but at least that thread may be taken care of, finally.

Folks looking for other content aren’t entirely out in the cold, either, as Season 9 brings big updates to high-level play via revamps to the reputation system and ground combat kits. Several single-player missions involving the Borg have been “remastered”, and newl character customization options are aimed at adding greater ethnic diversity, as well. Most visibly, the main hub area for Federation players, Earth Spacedock, has been overhauled entirely, and now looks quite a bit better.

Check out the trailer above for more info about the new changes, and below for an update on the game’s story so far.