But there’s a learning curve

Only a few hours ago, the E3 show floor opened up. As soon as it happened, Nintendo’s booth was flooded, and the half-dozen or so Star Fox Zero stations were thick with intimidatingly long lines. People were willing to wait to play this. By the time they finally put down the controller, I’d wager most would eagerly say the wait was well worth it.

One of the biggest reasons Star Fox Zero shines is because of its GamePad functionality. While the monitor displays the Arwing from a third-person view, the GamePad’s screen gives a first-person glimpse from the cockpit. The change in aesthetic is nice, but that’s not really the GamePad’s purpose. Instead, it allows for greater precision when aiming, as there are vantage points that would be otherwise out of view.

Bolstering the mechanic is the GamePad’s built-in gyroscope. Tilting the controller moves the aiming reticule. This works in both viewing modes, but it’s wildly more useful when looking at the GamePad’s screen. A prime example came when some robotic spiders started slowly attacking. Their only weak spot was on top of them, so it was necessary to fly directly above them, and then look at the GamePad to shoot straight down.

Without wishing to sound too hyperbolic, this integration is such a creative use of the GamePad because the disconnect between the third- and first-person make it actually seem like you’re hopping into a fighter jet — even if just for a few seconds. Like, you need to look down to take care of some stuff, and then it’s right back to flying about. Simply put, it’s really great.

However, there’s an obvious learning curve, and it’s not one that I was able to master in my 15 minutes with Star Fox Zero. Knowing which screen to look at, dealing with two different sets of inverted controls (left stick and gyroscope), shooting, all while avoiding enemy fire is no small task. There were several times when I’d brilliantly handle one small section only to completely bungle the next. Even when I thought I had the hang of it, I didn’t.

The level I played was on Corneria and it consisted of three phases. The first two were meant to acclimate you to the controls. It was probably possible to fail, but it didn’t seem likely. By the time the boss revealed itself at phase three, the kid gloves came off. I’m not ashamed to admit that I didn’t last long. I got caught up in looking at the GamePad too long when I should’ve spent more time navigating the Arwing. Shucks. 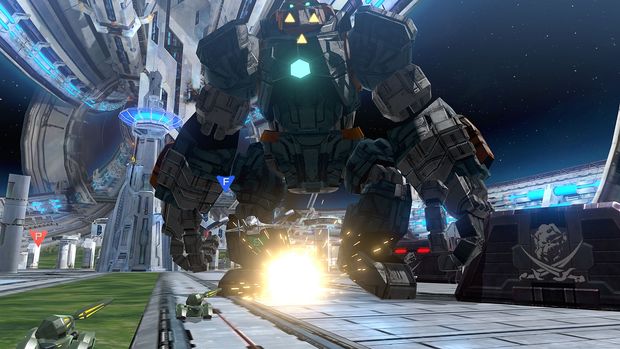 I may have been disappointed in my failure, but I can’t say I was disappointed with my experience. It was fantastic seeing and hearing from Peppy, Falco, and Slippy again. I did barrel roll after barrel roll — not for survival, but for fun. It probably would’ve helped if I did them evasively.

Platinum and Nintendo could’ve taken a simpler, scaled-down approach to this Star Fox, and everyone would’ve welcomed it with open arms. Rather, they’re doing interesting and innovative things with the Wii U hardware, and that might be enough to push Star Fox Zero into another stratosphere.