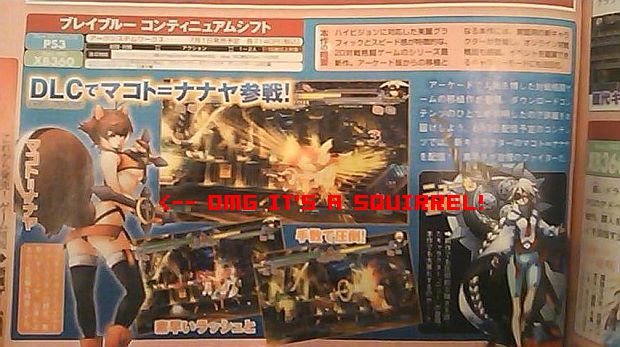 In ground breaking news for fans of BlazBlue and squirrels(!!!!), some Famitsu scans reveal that Arc System Works and Aksys are going to release downloads for brand new characters to BlazBlue: Continuum Shift when it launches in Japan on July 1 and in the States on July 27. Considering fighting games rarely, if ever, offer new characters for DLC, this sets a new precedent.

So what will we look forward to when we drop some extra change? Well, super awesome amazing squirrel girl Makoto finally brings her squirrelly ass to the game, and it looks like she’s rocking the tonfas. As well as a major case of under-boob, which is my favorite boob. Why? Because there is always an element of danger, as they could go falling out at any moment. Beware the under-boob!

Also making a DLC return is Nu, who was originally kicked to the curb for Continuum Shift in favor of Lambda. Now that’s fixed, and she can be purchased along with Makoto. While I’m looking forward to these additions, especially Makoto(!!!!), I am a little concerned that balancing might be problematic, and these characters could be too powerful, or not powerful enough. Let’s see when Continuum Shift comes next month.