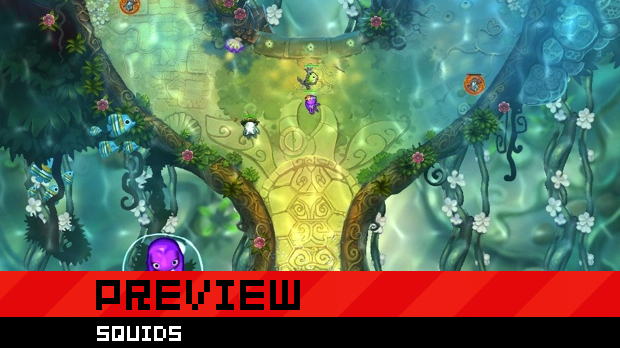 I knew that there was some solid game making experience among the staff of the newly formed company The Game Bakers, but I didn’t know what to expect with their latest game, Squids. The team is made up of former Ubisoft staff, and former shipped titles include Ghost Recon, Splinter Cell, and Rayman Raving Rabbids. But there’s nothing in the way of Tom Clancy seriousness in this game. Instead you’ll find cute little squids, happy little fishes and pastel colors.

To my surprise, Squids is a beautiful iOS title that mixes pull-back-and-shoot action with tactical strategy. Yes, this is technically a SRPG.  I wouldn’t go as far as saying that it’s Angry Birds meets Shining Force, but there’s elements of both to be found here, and it all works really well together.

You control a team of four…squids in Squids, working to fight against the Black Ooze that is spreading through the seascape. While there is sea life flinging involved, the true core of this game is tactical strategy. Each of the four squids has their own unit type, though that isn’t immediately apparent under all that cuteness and eye-popping color. There’s your standard scout, who can dash to reach longer distances; a cute healer can fix up any other nearby squid; a little gun-wielding red squid shoots; and a fat, yellow squid in sumo gear is the ‘tank.’ Power-ups can be found or purchased, and these can tweak each unit type’s abilities.

You’ll pull back on these stretchy little bastards by the tentacles to fling them in the direction that they’re facing, which adds a bit of fun to the usually boring movement phase of tactical games. After they’ve moved you’ll see a ring that shows available targets for attack.  Fling too far and you’ll ‘ring out,’ sliding right off the game map and into the deep blue. Maps are also populated with obstacles like spikes, or water currents that push enemies (or allies!) into traps. Really, it’s like your favorite SRPG from here on out, except way more colorful.

I got to take Squids for a spin (flick?) on an iPad at PAX and I was hooked from one round. First off, this game is beautiful, with lush colors, and detailed art and animation. You can definitely see the team’s AAA console game roots here. I also liked how easy it was to play. All of the movement, attacking and upkeep is really simplified, and feels very intuitive on a touchscreen. There’s some real strategy going on here to keep tactical fans entertained, especially with the well-crafted maps and innovative power-ups, but the squid flicking is cute and fun enough to give the genre a casual touch and bring it down to the masses.

Squids is a really nice blend of iOS gaming and smarter tactical play that came out of nowhere. And now I need it. I feel like just about anyone would dig this polished, unusual mix. It’s easy enough that those usually scared off by strategy games need not worry. And really, in what world is flinging sea life by the tentacles not fun?