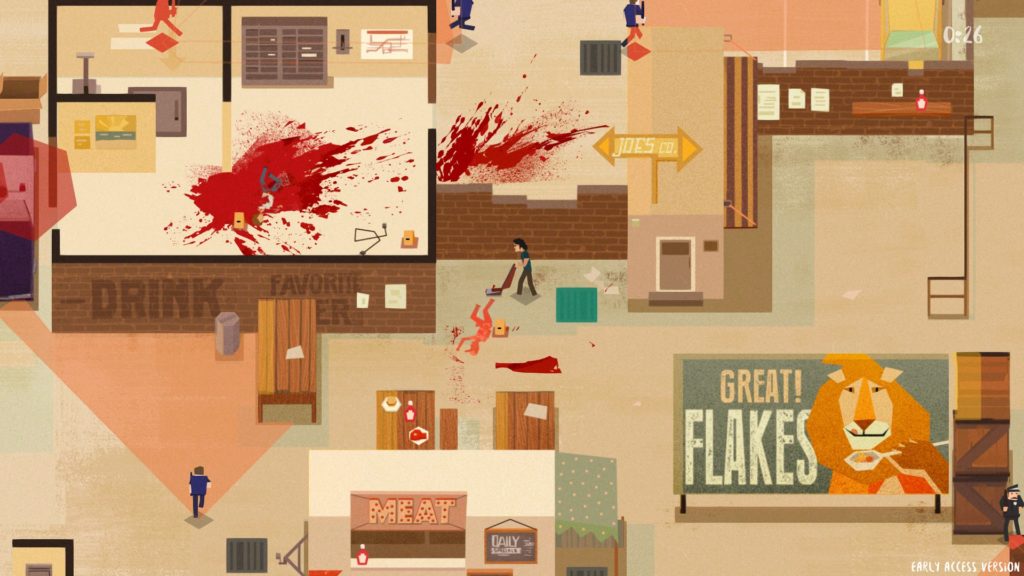 Warning: surface may be slippery

Many gamers are responsible for wanton, brain-splattered carnage in their escapades. But who gets to clean all that shit up once they’ve had their fun? Well now, you can!

Today sees the release of Serial Cleaner from Curve Digital. Set in the 1970s, the game sees you as a “cleaner” (in the “Jean Reno in Nikita” sense) hired to mop up after various murders and massacres, removing bodies, blood-stains and other evidence whilst evading the law who show up to investigate the visceral horror.

The game, which boasts stylistic visuals, blends top-down stealth action with dark humour to make for a challenging and sticky experience as you move from scene-to-scene quickly scooping up brain matter and bagging up bodies whilst using the surroundings to keep yourself hidden out of sight, lest you end up inside one of your own body-bags.

As a fun extra, the game’s bonus levels see you scrub up after famous movie massacres, including scenes from Alien, Taxi Driver and Suspiria. If I was lazy, I’d say “It’s Hotline Miami meets Viscera Clean-up Detail!” but I’m not, so I won’t (and you should forget that I just did.)

If you fancy getting your hands dirty, and don’t mind scrubbing the entrails from your fingernails, then Serial Cleaner is available today on PS4 for $15, with Steam and Xbox One versions releasing Friday.