For as small as it was

Final Fantasy XIV has been steadily growing since it’s relaunch as “A Realm Reborn” in August of 2013. Before that it was a shell of a game, barely worthy of its core entry moniker. I even remember previewing the original XIV many E3s ago as an XI player, shaking my head during the demo and coming away disappointed.

A large reason for said rebound is due to the tenacity and likability of the game’s producer Naoki Yoshida (commonly referred to as Yoshi-P), who was in attendance at the second Fanfest event this past weekend in Las Vegas. And outside of a few snafus, it went pretty well! 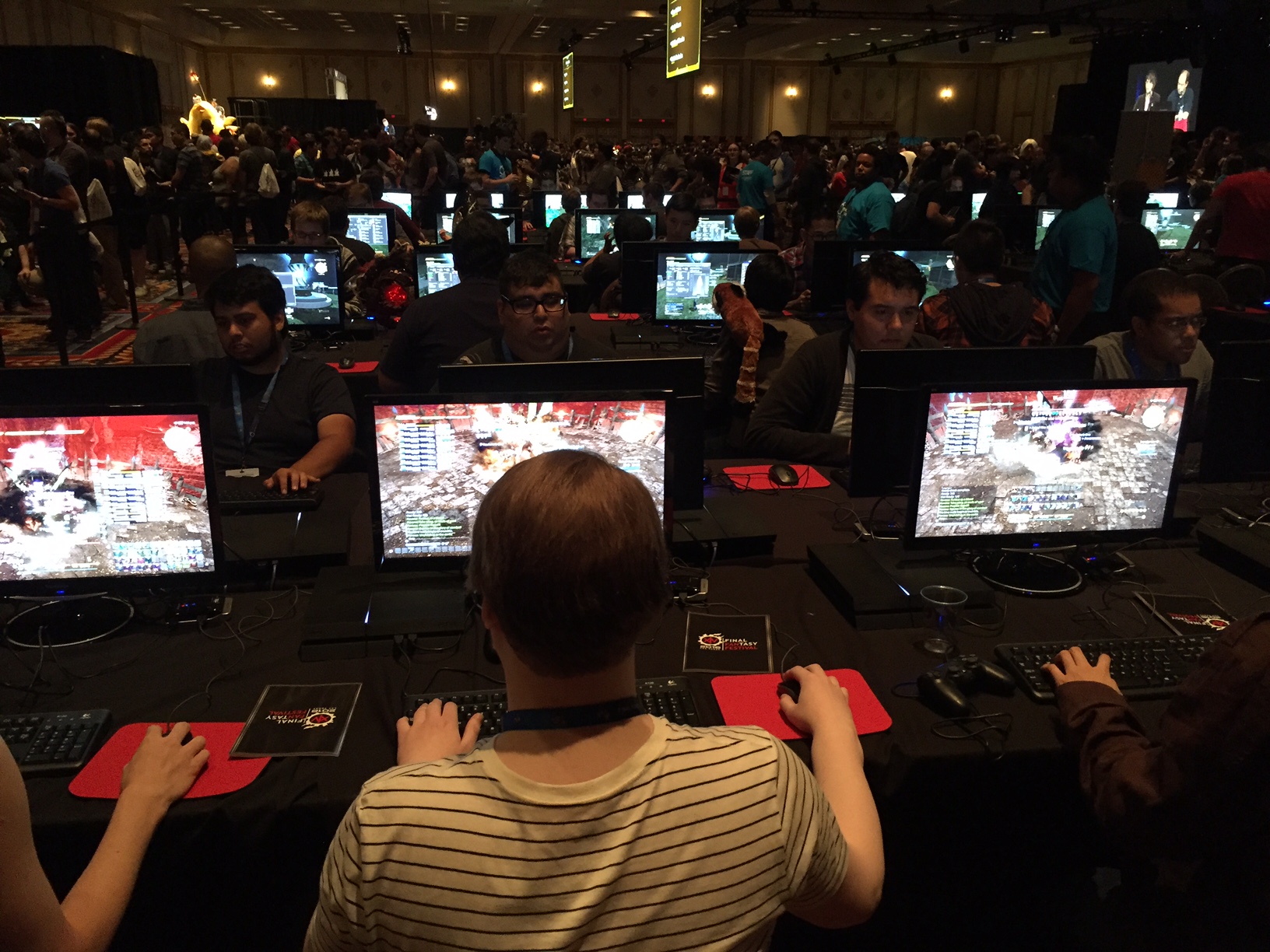 This year Fanfest was held inside of the Paris hotel, all in one giant ballroom. It’s just enough space to hold all of the attendees, and it didn’t feel particularly cramped, even during the Primals rock concert on Saturday night. And since Paris is located directly on the strip, there’s plenty to do outside of Fanfest itself.

As for activities, immediately following the keynote, basically everything opened up. That included the exclusive Proto-Ultima 24-person battle, as well as a 4v4 PVP setup (an arena mode dubbed “The Feast”), and my favorite thing of the event — a trials roulette that had an actual roulette wheel that someone spun to determine the challenge. Our group (consisting of some staff from USGamer and RPG Site) struggled with our synced down gear for Sephirot normal, not expecting the tank buster to hit so hard, but we pulled through and got it done.

There were also some low key carnival type activities outside of the aforementioned three massive PC/PS4 equipment stations (both supported mouse/keyboard and controller play), and panels every other hour or so that were engaging and enlightening for fans (the best one was probably the etymology of a boss fight talk). Plus, the core staff were present outside of giving their talks, hanging out on the floor and shaking hands with fans and signing autographs. I managed to snag Yoshi-P himself for a quick second before a massive line formed!

But there was one big snafu that pretty much everyone who attendees agrees needs fixing next time — the merchandise line. Not only was the queue snaking around the entire event at the start (mostly people who wanted the coveted lore book, which was unceremoniously announced as available several days later after it sold out), but it was also poorly managed. Square Enix opted to hire an outside vendor for staffing this year instead of relying on fans, and it didn’t work out so well, especially for the merchandise portion.

Not only did the line get cut off at a certain point after people had been waiting for several hours, but many folks weren’t even told — leading them to wait in what was essentially a dead line for an hour or more. Tickets were given out for priority spots for the next day, but that wasn’t very well organized either. In the end, most people waited and had nothing to show for it.

Having been to conventions for around two decades now, I gave up on the merch situation immediately following the keynote and had a great time. Hopefully Square Enix finds a way to address this at future Fanfests (which are happening all over the world until February) though, as it put a damper on an otherwise wonderful event. My favorite part though was the ability to just talk to anyone. Since it was just focusing on one game, everyone played, and you could just ask people out of the blue what server they’re on and what class they primarily use. Although Square Enix provided travel to the event for Destructoid, I’d definitely attend again on my own dime.