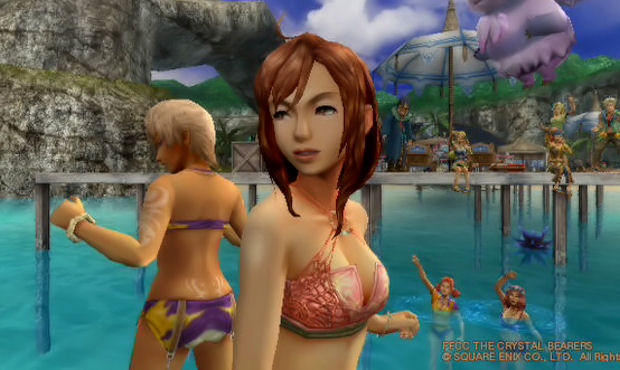 As you have have gathered by now, we’ve been chatting with Crystal Chronicles: The Crystal Bearers producer Akitoshi Kawazu. We wanted to know what it was like working on the Wii, and how the graphics-hungry studio deals with the system’s limitations.

“The Wii has a good balance of graphic capability and memory space, and thanks to this we could realize a game with seamless field-to-field connection,” states Kawazu. “While it was a challenge to integrate the Wii’s unique input style with the various system functions and controls, we feel we were able to create a game that utilizes the platform’s unique characteristics to its fullest potential.”

Oh I see! And what about Sony and Microsoft? We asked Kawazu-san what he made of Project Natal and the Sony Wiimote as everybody jumps on the motion control bandwagon.

“When done right, motion sensor controls give you an extremely ‘real’ gaming experience,” he tells us. “I think the more knowledge that the developing side acquires, the better motion control games they will be able to make, so there is definitely a lot of potential there. However, many players are still more comfortable with traditional controls, and years of gameplay have gone into perfecting their techniques.

“It would probably take some time for motion controls to be of equal status with a control system that has such history. It’s something to consider, but I don’t think it will ever be a simple task to transition the series to different platforms simply because they have the motion control functionality.”

I personally wish the motion control stuff would go away, but what do you reckon? Are you looking forward to a day where motion control stands in equal importance to traditional input, or are you too longing for a day when such toys join Rob the Robot on flea market tables across the realm?