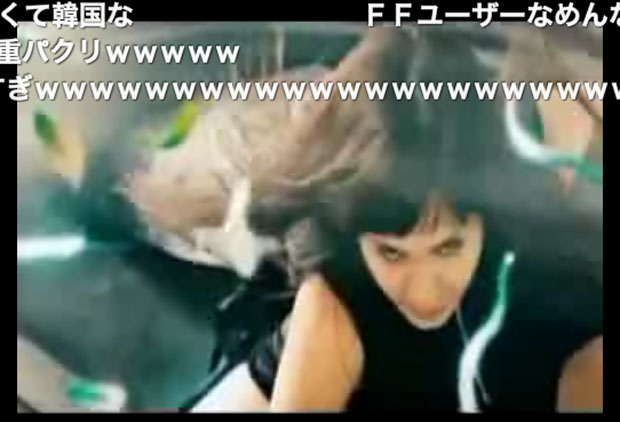 You think you’re making a cool cosplay music video, and then Square Enix slaps you with a lawsuit, and you’re forced to pay $325,000 for paying tribute (*cough*) to one of their properties.

That’s exactly what happened to Korean producer “Phantom Productions.” It seems that they used unauthorized bits and pieces of the Final Fantasy VII Advent Children film in their video. That was f-up number one. The other, of course, was that they used the video for commercial purposes. Korean courts sided with Square Enix, and the makers were ordered to pay 400,000,000 won ($325,000) settlement for copyright violation, says Sankaku Complex.

Those with a Nico Nico Douga account (Japanese) can watch the video here. The rest can check it out at Sankaku. If you can read Japanese, the viewers are laughing heartily, especially at the mid-video dance sequence.

If I was Square Enix and saw this piece of sh*t, I’d sue too.

[Update: English-language press release was just sent out on this suit over “Sonata of Temptation” by popular Korean pop singer IVY. Check out the full release after the jump.]

In light of this development, Mr. Yasuhiko Hasegawa, Square Enix’s General Counsel: “We have been consistent in our claims during this lawsuit regarding the value of FINAL FANTASY® VII ADVENT CHILDRENTM and our FINAL FANTASY series, as well as the damages the company has suffered as a result of the modification and adaptation made without obtaining permission. The initial amount awarded in this case, 300 Million Korean Won, was the largest the courts in South Korea have ever awarded in cases infringing one single work of art, and having this figure increased to 400 Million Korean Won following an appeal by the defendants is further affirmation of the severity of this copyright infringement as well as the recognition and value the FINAL FANTASY series has attained in South Korea. Square Enix will continue to take decisive action against any infringements upon our intellectual property, recognizing that this property is one of our most crucial resources.”

(Summary of Events)
In March 2007, Fantom began the for-profit online distribution of a music video for the song “Sonata of Temptation” by popular Korean pop singer IVY containing an unauthorized live-action scene-for-scene adaptation of a scene from FINAL FANTASY VII ADVENT CHILDREN. In response to an injunction filed by Square Enix, the Seoul Central District Court ordered Fantom to cease distribution and sales of the video as of April 6, 2007, and subsequently, on March 13, 2008, ordered Fantom to pay damages of 300 Million Korean Won. Fantom and Mr. Hong Jeong-ho appealed this decision and the case was elevated to the Seoul High Court, which on July 3, 2009, issued the decision ordering Fantom and Hong Jeong-ho to pay damages of 400 Million Korean Won.

About FINAL FANTASY VII ADVENT CHILDREN
Released in September 2005, FINAL FANTASY VII ADVENT CHILDREN is a CG animated film which was published as a sequel to FINAL FANTASY VII, a PlayStation® game shipped in January 1997. The film has been released in both dubbed and subtitled versions in 70 countries, and has shipped over 4.1 million DVD/UMD discs worldwide without theatrical screening or TV animation. In April 2009, it was released on Blu-ray Disc™. The film has received great praise, as evidenced by special invitations to the 61st and 62nd Venice International Film Festivals in 2004 and 2005, as well as being honored with the “Prix Zone05” at Zone05 in France, the “Honorary Maria Award” at the Festival Internacional de Cinema de Catalunya in Spain, and the “Best Visual Designer Award” at the 11th AMD Award in Japan. It was released in Korea in June 2006 from Sony Pictures Home Entertainment.