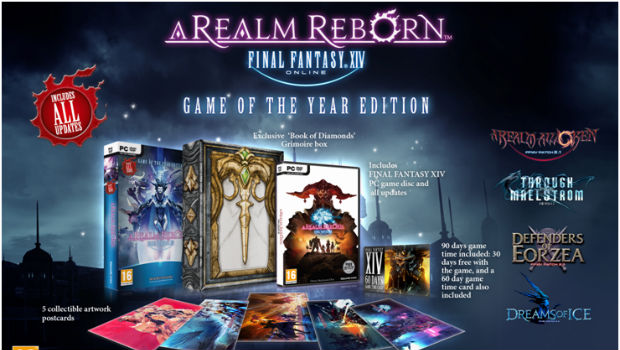 On November 14th, Square Enix will release a “Game of the Year” edition for Final Fantasy XIV: A Realm Reborn. It comes with a lot of physical goodies, including a printed book and five art cards.

On the digital side it comes with the game of course, and 90 total days of playtime. The package also includes “all of the updates so far,” but since it’s an MMO and you need to login and update to the latest version anyways, that’s a given — there have been zero paid expansions so far (though one is coming next year).

This isn’t a great deal for anyone but the most hardcore of fans looking for those physical extras, but newcomers should probably jump on the 90 days of playtime given the price. In other FFXIV news, update 2.4 with the Ninja job is still coming in the next month or so.