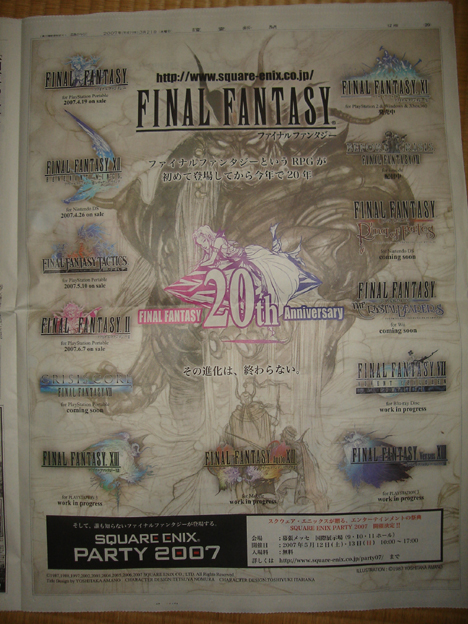 Not enough Final Fantasy games on the Horizon for you? This ought to pitch a tent in your pants. Square Enix has announced an event called “Square Party 2007” on May 12th and 13th at Makuhari Messe, near Tokyo. Here’s the full translation:

Square Enix released, in daily Japanese newspaper Yomiuri Shimbun, a publicity page  to  announce  their  special  event  “Square Enix Party 2007” which will take place  the  12th and 13th of next May at Makuhari Messe, a few kilometers east of Tokyo, Japan. We also find the logos of all of the shutters of the Final Fantasy series in development, as well as a phrase that’s intriguing enough, but leaves us dreaming; “Evolution will never stop, the series continues … and a new Final Fantasy that no one knows will enter the scene.” So, will a new Final Fantasy really be presented on the 20th anniversary of the series? Something to follow very closely.

Square is so vague and dreamy. When I think about the main offices, I imagine a bunch of Japanese men and women in business suits, lazily having meetings and periodically smoking opium. It would definately explain the existance of Final Fantasy: The Spirits Within. Anyway, what the hell does “a Final Fantasy that no one knows mean”? More importantly, do we care?