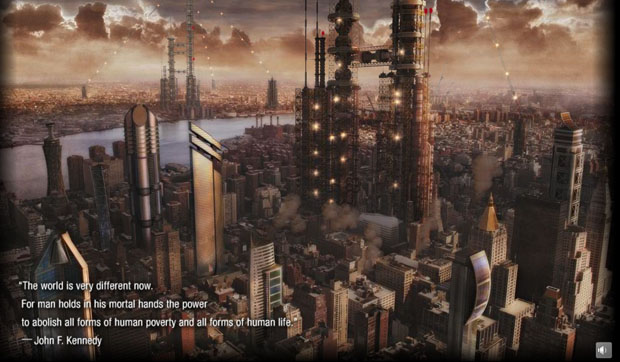 I saw Square Enix Japan’s mystery webpage earlier today and had some ideas. You see, the title of the page is “NEW GAME,” and other than a John F. Kennedy quote and a cool cityscape, not much else is shown or shared. But if you listen instead of look, you can kind of imagine the sounds coming right out of a new Front Mission (Square Enix’s militaristic strategy RPG series) videogame. But that’s all I had, really. Nothing worth talking about.

It turns out that the same backdrop on this webpage was used at the end of a teaser in the June issue of OXM. The folks at 1UP seem to be pretty sure that this is a new Front Mission game for the Xbox 360, set to be revealed at E3.

If this is the case, then we look forward to telling you more about it in exactly one month. I’m already getting my hopes up. What about you?