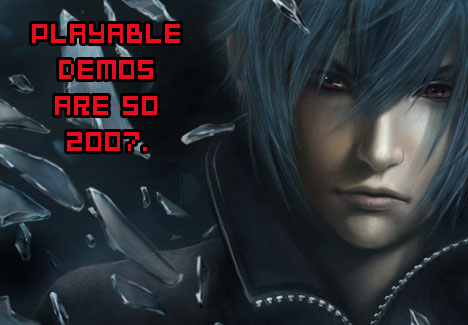 As you may have spotted earlier in prolific community member Brad Nicholson’s Cblog, Square-Enix is hosting an exclusive little shindig this August 2nd and 3rd. Apparently admission is more exclusive than the velvet rope bars I watch people stand in line for every weekend in Miami Beach — only 2,400 people have been invited, and all were picked from the Japanese Square-Enix Members website. Fancy, indeed.

The party is going to be called DKΣ3713, which could be the only name for it I might like less than “wang exposition”, and attendees get to watch trailers and play demos for the following upcoming Square titles: