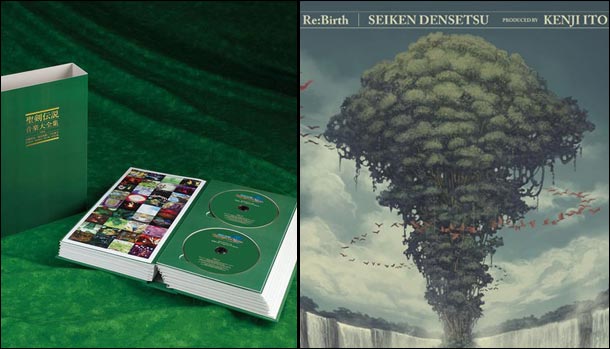 While the music from the Seiken Densetsu series has always been highly-regarded (with Hiroki Kikuta’s Secret of Mana soundtrack being a fan-favorite), Square Enix hasn’t given the series much attention when it’s come to paying homage to the franchise’s musical legacy.  That all seems to be changing for the series’s 20th anniversary as seen first by the enormous 20-disc soundtrack box that was recently announced for the end of September as well as a couple of new album releases that have been trickling out since.

First up is the SQ Chips album that is due out at the beginning of September.  We’ve already mentioned that this will be a Chiptuned Rockman-esque album featuring 8-bit arrangements from across Squaresoft’s catalog, although a preview CD recently released in Japan titled SQ Chips Preview Mini Album sports two out of five tracks dedicated to the Secret of Mana alone.  “Meridian Festival” is an arrangement of the popular final battle theme, while “Crisis” is the main boss battle theme whose bass-heavy arrangement has me more excited for this album than ever.

The latest announcement is Re:Birth / Seiken Densetsu Kenji Ito Arrange Album, which, as the title would suggest, is a tribute to the first Seiken Densetsu title which is known as Final Fantasy Adventure outside of Japan.  Ito was responsible for this game’s soundtrack as well as for Dawn of Mana, and while details on this album are scarce, I’m pretty sure we can expect to hear Ito’s signature piano work.  This album’s due out on October 19, 2011 for 2,500 Yen in Japan.  As if the saving other two albums wasn’t enough!

Are you ready to break the bank and get your Seiken Densetsu soundtrack lovin’ on later this year?  Which of the three releases are you most excited about?