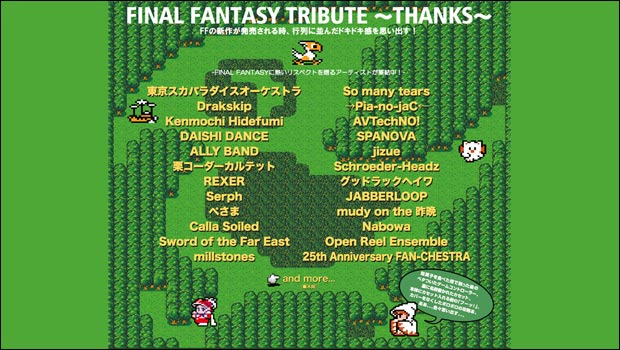 Best album title ever. Square Enix has promised a number of musical tributes to the Final Fantasy series to celebrate 25 years of the franchise, including the Final Fantasy Vinyls collection we mentioned last month. Now they’re putting together a new album in the SQ series lineup (see our reviews of Beer SQ and Battle SQ here) to round out the year.

Final Fantasy Tribute ~Thanks~ will feature 25 tracks across two discs arranged by a variety of artists and special guests. As you can imagine, while the SQ series pays tribute to all Squaresoft and Square Enix properties (nothing exclusive to Enix, yet), this album will focus entirely on Final Fantasy. It’s due out on December 5, 2012 for about 2,900 Yen ($36 USD) and can be pre-ordered at CD Japan with first-press editions coming with a cardboard slipcase.

The artwork above has me sold on this album, but the list of arrangers is also very impressive. Do Final Fantasy fans out there think this is something worth importing?