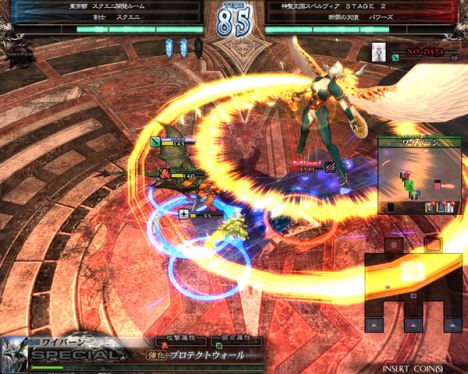 Square trademarked the name Lord of Vermillion way back in 2007, but those of us with hopes for a new RPG were to be sorely disappointed. We had heard since that Square planned to release a Japan-only arcade game. Head honcho Yoichi Wada actually attended the premiere of the card-based arcade game recently at Shinjuku Taiko Station, and Kotaku has some great pics up from the event. From their article:

In LoV and other similar card-based games, players moved cards around on a sensor field, which corresponds to their on-screen movement in real time. These arcade games are a tad on the pricey side, forcing players to not only pay-per-play but also for the actual cards themselves.

I love card/action hybrids; I wish the US could have seen this game. Sounds like the cards are a bit expensive, but considering they are collectible items in and of themselves, surely the Japanese will be ponying up for an opportunity to check them out. What do you think of all this card arcade business?