Two things I’m very weary of in life: kids and developers mostly remembered for big hits from 25+ years ago. Look, if you’ve ever played Amy, you’ll understand where I’m coming from. Even so, someone thought I was the ideal person to play 2Dark; a new indie game by Frédérick Raynal, creator of Alone in the Dark and Little Big Adventure, in which you rescue a bunch of little brats from psychotic kidnappers.

Thankfully, by the time I wrapped up 2Dark‘s preview build, I felt far more confident in Raynal’s latest effort; a twisted stealthy take on survival horror that tries to avoid the usual irritations of escort missions. I still don’t care much for kids, though. 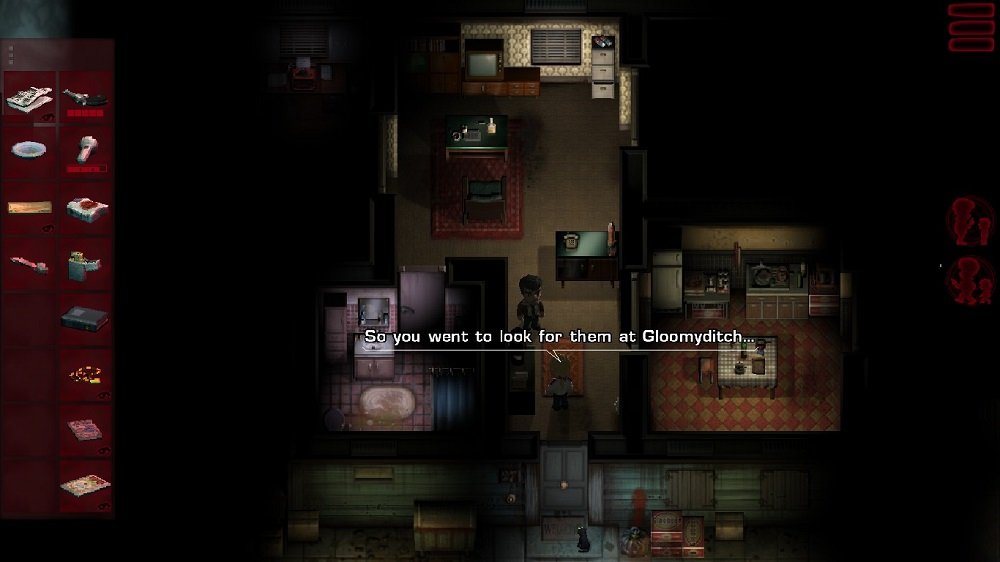 2Dark tells the story of Detective Smith, a vigilante cop pushed over the edge by an unfortunate camping incident. His wife was murdered and his two kids were bundled into the back of a creepy school bus, never to be seen again. Years later, Smith secretly hunts down members of a kidnapping ring in hopes of finding his offspring alive and well. But things aren’t that simple in Gloomywood; more and more children are being abducted and Smith is just one man. He’ll need to be one with the dark if he has any chance of getting them out alive.

At its core, 2Dark is a stealth puzzler with a survival horror mindset, where the tables constantly turn between hunter and hunted. Darkness is your friend, so to whittle down the numbers, you have to stick to the shadows and strike out in inventive ways. While it’s not as adaptive as it sounds, with certain patrols being scattered by specific actions and items, 2Dark’s enjoyment lies in the power you have over your enemies when the time finally comes.

2Dark certainly lives up to its name, what with its disturbing artwork and every location being enveloped in darkness. Illuminated rooms look more like little beacons in the distance, and while it would be easy to wander through the darkness, instant death traps usually lie in wait. Light is more of a necessary evil, here; essential for traversal and finding keys, but dangerous enough to give your position away. Even the act of saving turns out to be a gamble, too, as it comes in the form of real-time smoke breaks, with every puff lighting you up for all to see.

Smith’s main goal is to rescue a group of kids and bump off their captor. To do this you have to escort the little tykes back to the start, and to make things tougher, some come with their own quirks. Some whine loudly, others walk off when left alone, and in one case, are too drugged up to walk. But as long as you have a clear route, rescuing them is never much of a problem. 2Dark might present itself as one big escort mission, but it’s actually quite lenient in that regard. 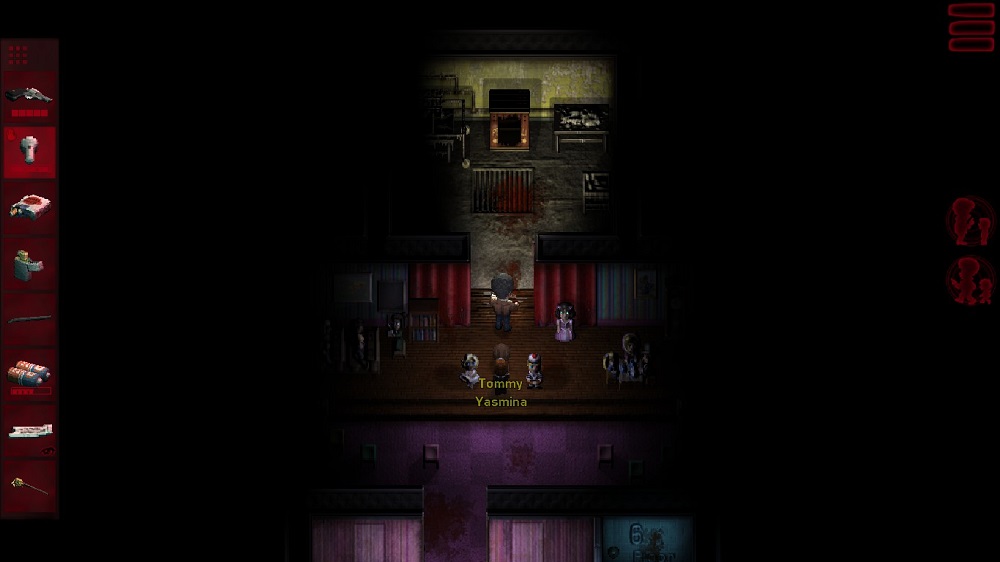 Maybe the developers also played Fade to Black, and like myself, are continually haunted by that doddery old professor in the second level; probably the worst escort mission ever committed to gaming. Even if they haven’t, I’m happy to report that 2Dark avoids making it a chore, and it’s quite endearing seeing Smith sling a kid under his arm as they make a beeline for the exit.

Of course, while it’s all very lax, it also ends up making some of the intended mechanics, like the “stop/follow” commands, come off as redundant. The game is challenging enough, but it could probably use a few more hurdles or a scripted change in patrol. As it currently stands, 2Dark prefers to keep things casual. 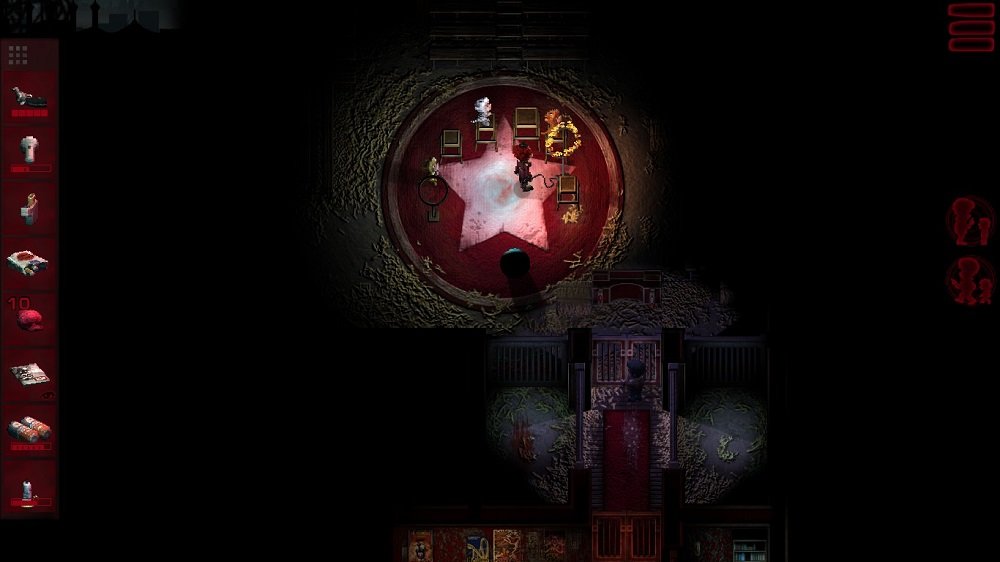 Bosses are far more rigid in comparison. They’re assassination puzzles, tackled in specific ways. At the abandoned fairground, an evil clown tries to ambush you in the dark, so it’s all about leading him to his doom. The second boss, a greedy heiress in her penthouse suite, was far more layered in its approach. It’s here that the Alone in the Dark influences are at their most apparent, as you cautiously move through an apartment block, completing a series of progressive challenges on every floor.

Alone in the Dark is not the only ’90s influence, either. The voxel graphics give 2Dark this grimy look, with every bump and scuff caught in your in curious beam. Everyone looks like they belong on a Jack Off Jill album cover, lending a creepy childish slant to their tragic backstories. As weird and grungy as it all looks, 2Dark is knowingly different; capitalising on forgotten forms to stand out from the oversaturated 8-bit crowd. 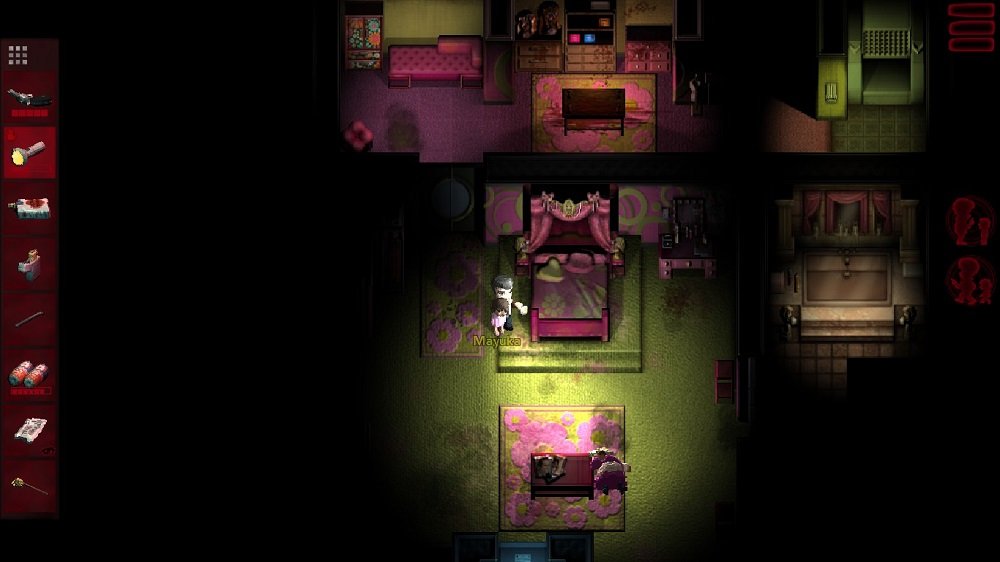 While I am singing its praises, 2Dark does have several nagging problems: short game length (going by the achievements, I was already a good third of the way through), simplistic enemy AI, doors forcing you into an accidental sprint, and certain mechanics not being utilised to their fullest. Most seem fundamental and unchangeable; though overall it’s close to being the complete package. Hopefully, and this is mostly from my impressions of the Scarlett Tower level, 2Dark opens up further, becoming more expansive and fiendish as it goes on.

2Dark is shaping up to be a solid adventure, where the dread of an escort mission comes from what lies ahead, instead of those dragging their heels behind you. While it might not be scary, it certainly has that creeping horror about it, tied up with some tongue-in-cheek weirdness for good measure. 2Dark is pitch black in more ways than one.