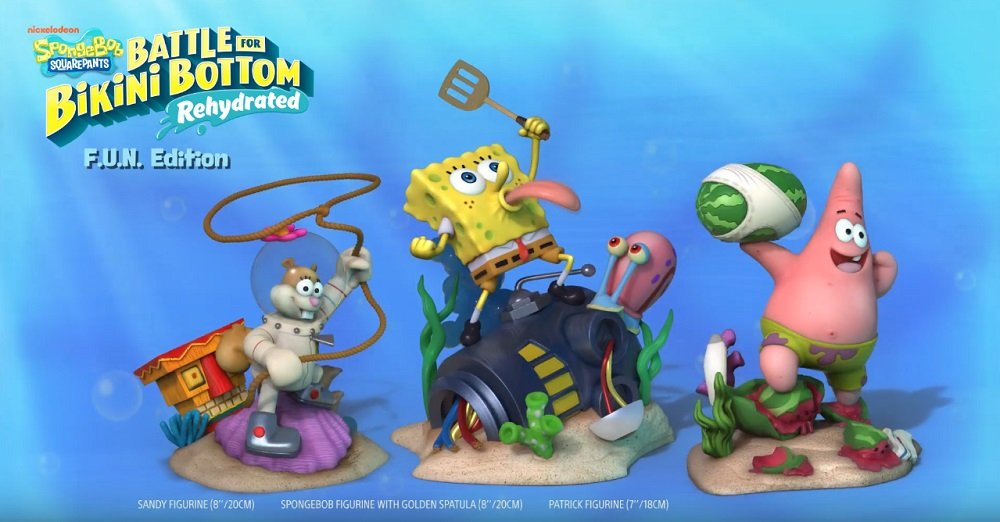 You’ll need all your sunken treasure

Two Special Editions will be sailing into port with the arrival of Purple Lamp Studios’ upcoming remake SpongeBob SquarePants: Battle for Bikini Bottom – Rehydrated. THQ Nordic released details on both editions, though you’ll have to spare with some coin to acquire them.

The “Shiny” edition includes a copy of the game on the format of your choosing, six art lithographs, a sticker sheet and a pair of SpongeBob sport socks. The centerpiece of the collection is an eight-inch figurine of Mr. SquarePants himself, accompanied by Gary and holding aloft his mighty Golden Spatula. The Shiny edition will retail for around $150.

The “F.U.N.” edition includes all of the above items, but adds a set of Tiki keychains, as well as two more figurines: A seven-inch model of best pal Patrick Star, and an eight-inch model of the spunky sea squirrel, Sandy Cheeks. The F.U.N. edition will retail for around *deep breath* $300.

While Amazon UK is showing all editions available to pre-order now, the U.S. branch at this time has all editions listed as “Currently Unavailable.” SpongeBob SquarePants: Battle for Bikini Bottom – Rehydrated is in development for PS4, PC, Xbox One, and Nintendo Switch, with a release scheduled for 2020.