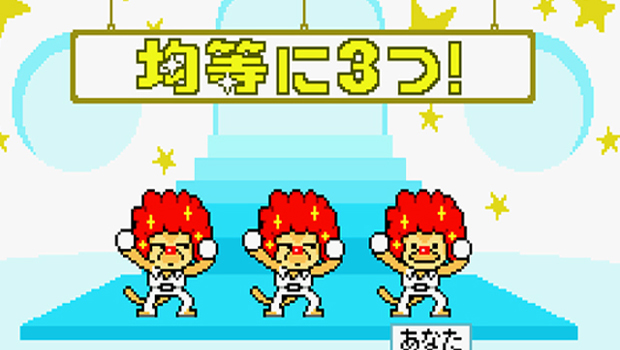 I’ve been working on a import review of Minna no Rhythm Tengoku (known as Rhythm Heaven Wii in the U.S.) for almost a month now. Problem is, I just don’t have the skills to unlock everything in the game. Though it has incredibly simple controls, this rhythm action/comedy title can get really, really hard, especially if you’re trying to score a perfect on one of the later levels.

In order to unlock the special, endless remix seen above (which includes all the other endless levels mixed together with three all new mini-games), you’ll have to get a perfect on all 50 of the game’s main  games. That’s an achievement that I may not be able to obtain in this lifetime. A 13 year old from Chile (with a loud dog) was able to pull it off though. Rock on, dude.

Below are a few of the other special unlockables I did manage to obtain; four rerecorded songs from the original Rhythm Tengoku on the GBA. Despite being arguably the best game in the series, Nintendo never released that game in the United States. That fact, along with many other things, makes me worried for the Wii version’s real chances of release outside of Japan (where it’s been the #1 Wii game on the market for a month). It’s getting pretty close to the end of the year, and the game still doesn’t have a firm release date. Don’t scare me like that, Nintendo!