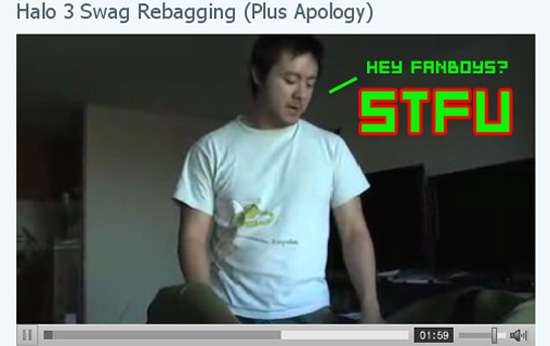 You guys are not gonna like this. That’s ok though, because I like it a lot, and since I write for Destructoid I get to put things I like on the front page for thousands of people to see. Ha!

So the story here is: Brian Lam at Gizmodo got an insane Halo 3 swag bag from Microsoft which he unpacked on film for site readers to see. Apparently his method of unpacking the bag frazzled Halo fans so badly that one of them actually made a death threat to Brian in the comments. A death threat! Over Halo swag! I’m surprised I’ve been able to resist fits of hysterics in the fetal position long enough to write this article.

In response to this rabid feedback, Brian has made a follow up video in which he repacks the bag and talks a bit more to the people watching. It’s hilarious, but I’m repeating the warning so I don’t get death threats myself: the video contains a MAJOR SPOILER and please DO NOT WATCH IT if you are trying to preserve the surprise of Halo 3’s ending. If you’ve already finished it or looked it up on YouTube, enjoy (or not.)

[Mad love to Adam Dork for this one]

Filed under... #Fanboys#Halo#Swag#Things gamers do