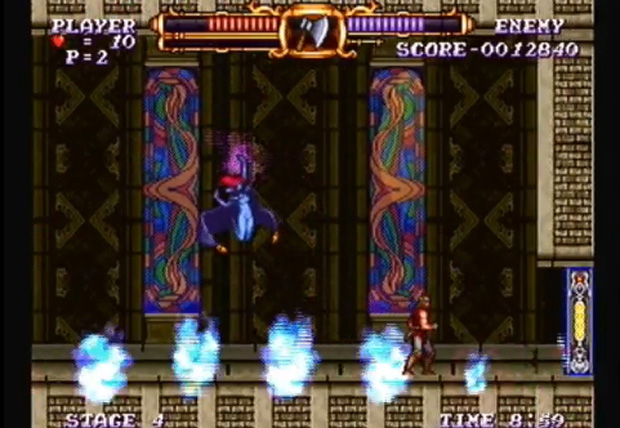 Yesterday, the Nintendo Week showed us about 12 seconds of the new WiiWare title Castlevania The Adventure Rebirth. Now, less than 24 hours later, someone has played through the entire game and put it on Youtube.

I’d caution against watching all this footage unless you’re extremely forgetful, lest you be spoiled. There are a few spoiler-free points I can share with you though. For starters, the game seems to have little in common with the original Castlevania The Adventure on the Gameboy, which is a relief. Other than the fireball shooting whip and the inclusion of Jonathan Belmont, this “remake” is very much a different game. It’s a least five levels long, with bonus levels potentially unlockable. Many levels have branching paths, which leaves the full breadth of the game currently unknown. Fighting more than one boss per a level seems common, which ranging in size from Belmont sized (like the blue naked woman above) to screen filling giants. The graphics sometimes look Rondo of Blood quality, but occasionally jump into Symphony of the Night territory. Perhaps the best thing revealed in these videos is the soundtrack; music from over ten Castlevania games, from the arcade only Haunted Castle to Super Castlevania IV, all get representation.

I’ll have to play it myself to see how the game feels, but after watching these videos, it’s easy to see how Castlevania The Adventure Rebirth may be one of the best of the “traditional” Castlavania game ever, right up there with Rondo of Blood and Bloodlines.

Hit the jump for the spoiler packed videos.

[Update: Youtube went down, but is back up now. All is well]