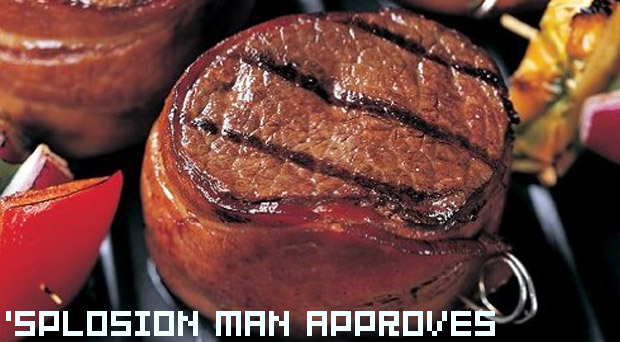 Easily one of the better downloadable games to come out this year, ‘Splosion Man was really only hurt by one thing: the inability to consistently get a good online co-op match going. The further you progressed through a level, the more out of sync you became with everyone else.

It was hilarious to see ‘Splosion Man swimming in the air at first, but then it became annoying pretty fast when the difficulty ramped up. Where am I going with this rant? Twisted Pixel informs us that a title update went out this morning — it should address the aforementioned problems.

The studio sent two other interesting factoids over, the first pertaining to Avatar Awards. Two male and two female outfits for your Xbox 360 Avatar can now be unlocked by playing ‘Splosion Man. See what they look like below, if you want. Or not. *shrugs*

Secondly, Twisted Pixel and Omaha Steaks are throwing a little contest: download a “special ‘Splosion Man” gamerpic and play the game online before November 22nd to possibly win steak filets. You can enter up to five times. Personally, it would have been cooler to see a doughnut giveaway, but this is still neat.