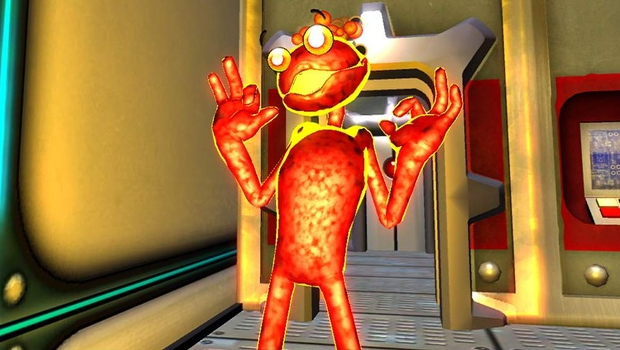 While playing through the XBLA game ‘Splosion Man recently, I couldn’t help but really fall in love with the fiery fellow I was playing as. Why? It wasn’t because he had an epic, heartwarming story behind him, nor was it the things that he did under the influence of my controller input (not to say that I didn’t enjoy blowing up scientists and clearing the game’s clever puzzles). No, I fell in love with him because of his body language. Specifically, his idle animations.

For those who have not played the game, you are thrown straight into the heart of the game without any backstory whatsoever to explain the subsequent events. At no point during the game is there any light shed on who ‘Splosion Man is or what he is like through the favored method of modern game storytelling, the cut scene. Instead, Twisted Pixel decided to let their character’s actions do the talking.

The art of the idle animation is more or less a lost one these days, forgotten about in the mass effort to bring complete realism to videogames. I almost forgot about it too, until ‘Splosion Man himself reminded me of something that I have long missed in the characters that I have the privilege to play as.

Simple idle animations have been around since the days of the first gaming computers. Maziacs, a game made in 1983, is reportedly the earliest example, but it is the 16-bit era that is often considered the height of the trend. During this time period, idle animations were very widely used, and most of them were extremely imaginative to boot. In fact, some of the most famous characters to come out of this specific era are more well known for the things they do of their own volition rather than the things they do while under the influence of the player’s button presses.

Take, for instance, the character Sonic the Hedgehog. We all know now that he has an insatiable thirst for speed, but back in 1991, he was just a weird-looking mammal wearing shoes. Like most other games at the time, there was a very basic story told through both the manual and the game itself. The latter didn’t give many details on who Sonic was, and all the former had to say was that he was a “real cool hedgehog with [a] spiked haircut and power sneakers that give him super speed.”

I will always remember the moment that I first let go of the controller long enough to see Sonic go idle. The manual had said that he was cool and speedy, and the gameplay backed these claims (or, the latter claim, anyhow), but it wasn’t until I saw his toe tapping that I realized the full depth of his character; he wasn’t just fast, but he craved the top speeds he was capable of reaching, so much that he became impatient when the player chose to deny him them.

Then there’s Earthworm Jim, who is still one of the poster boys for idle animations today. In both EWJ 1 and 2, he has several different actions that he cycles through when left alone, each one a display of his quirks that could not be found anywhere else. He is a capable enough hero, which he shows by flexing his muscles, but he is also a little clumsy (twirling his gun and shooting it after accidentally turning it the wrong way, blasting himself in the face) and eccentric (pulling his body out of the super suit and jumping rope with it).

As graphics have evolved and realism has taken the front seat, the lifeline of the idle animation has sadly waned. You would think that new and exciting ways to show that a character has a life of its own would have come along with visual improvements, but unfortunately, most that were created after the advent of 3D gaming followed the Mario 64 model of falling asleep. The sleeping animation is a cute way to tell the player that the character depends on their input, but it does very little else when compared to the idle animations from the previous console generation. And then there are all those who are content to give their game’s characters nothing but a heavy breathing animation instead of something more interesting. Sometimes, it seems like the great idle animations of yesterday have been almost completely phased out in favor of other narrative methods.

Fortunately, some characters in 3D games have broken the mold. A great example can be found in another game that I recently played through, Mystical Ninja 64. The dialogue between the characters is enough to make it hilarious and personality-driven all on its own, but the developers added the extra cherry on top with a different idle animation for the four that are playable, each one reflecting their personal style. The no-nonsense robot ninja Sasuke sits and calmly sips a cup of tea, while the lazy Ebisumaru lies down for a nap. These actions may not be as weird or wacky as the other examples I have listed, not to mention that one is very similar to the uninspired Mario 64 sleep animation that I mentioned earlier, but they are still indicative of who they belong to, which is the important thing.

However good an example it may be, it’s been a long time since Mystical Ninja 64 was released. After going so long without seeing a truly captivating idle animation, I was pleasantly surprised to see what ‘Splosion Man does on his own after the controller is put down. What does it all say about him? Basically, they tell the player that he is completely batty from whatever those scientists did to him. And yet, he is not ashamed of what he is, either because of the power he now has or because he is just too crazy to feel shame. He is playful, zany, and, again, completely off his rocker. He is so full of energy that not even taking one’s hands off of the controller can stop him.

Twisted Pixel did not just make a funny-looking 3D model and carelessly throw it into their game. They took the time to make him feel alive, not through cut scenes or even a short story blurb before the game, but by allowing him to show us who he is. Something so small as an idle animation may seem insignificant in the grand scheme of things, but they often have a lot to do with how attached players become to the characters themselves. Years from now, people will still remember the things a character they once played did when idle. Personally, these are often the things I remember most about the stars of the games that I’ve played. Spot of Cool Spot? He did a little dance, snapped his fingers, and shined his sunglasses like the cool guy he was. Simba from The Lion King? He curiously watched a butterfly float by, and then pounced on it. Conker? He killed the time by playing Killer Instinct on a Game Boy.

Watching ‘Splosion Man babble to himself and clap his hands like he was really enjoying his alone time took me back to the days where I would just sit and watch Earthworm Jim cycle through his idle animations, and it made me feel all warm and fuzzy. It also made me wonder why moments like these are now so rare. Where are all the personality-packed idle animations today? Is there still room for such things in a time where realistic characters have extensive pasts, presents and futures that are all detailed in cinematics?

I don’t know the answer to the first question, but the answer to the second is a resounding “yes,” proven by ‘Splosion Man himself. Now that I am at the end of my little rant, developers, I beg of you; if you want your character to feel alive and be memorable to the player, give it a few idle animations, and be imaginative about it! It doesn’t matter whether your game is 2D or 3D, nor whether said character is a talking dog or a gruff lone agent. Make them do things that really show off what sort of person/animal/thing they are and we will love them. We might even make stronger bonds with them. Creating a believable character is not entirely about making them rigidly realistic and serious. Although I guess it makes sense that boring idle animations belong to boring characters.

I rest my case.