Spies vs. Mercs and co-op are back in full effect

Confession time ladies and gents: I’m not a big Splinter Cell fan. I didn’t much get into the first two, had an inexplicable obsession with Chaos Theory, largely passed on Double Agent, and only dabbled in Conviction.

A disgrace, I know, and a dry spell I’m increasingly tempted to break with Splinter Cell: Blacklist. It’s shaping to be the biggest Splinter Cell game yet. We’ve seen the campaign at length, and not to be outdone, the multiplayer is bringing back Conviction’s acclaimed cooperative mode, as well as the return of the fan favorite Spies vs. Mercs.

Suit up agents, we’ve got a lot to get through.

One of the first things you’ll notice about Splinter Cell: Blacklist’s presentation is how it integrates its multiplayer pretty seamlessly into it’s single-player presentation. Speaking with Ubisoft Toronto co-op lead designer Richard Carrillo, “In Conviction, and a lot of other games, you see the main menu listing solo here and co-op there. You create this artificial split, and when you play those modes, it feels like a different game. We want to break all that down and make it part of the same experience.”

The solution to this problem comes in the Paladin hub area. From this giant warplane, you can initiate solo missions, dive into co-op, launch a game of Spies vs. Mercs, or just have a friendly conversation with your crew. “We want to have narrative ties across all of our different modes, tie everything back into Fourth Echelon.”

Co-op missions are broken down into sets, each given to you by different characters, and meant to reflect the characters you received them from. In practice, this means different sets of stipulations placed on the players. Missions handed down from Grim, for example, may harken back to earlier Splinter Cell games since she is a long time character. There’s a greater emphasis on ghosting your way through these missions, with levels restarting when detected.

A number of these hardcore variant missions are essentially one big I-told-you-so from Ubisoft to fans who doubted stealth could work in daytime environments. Remember when they re-released the E3 2012 stage demo but as a ghost playthrough instead of assault? Well the team is still out to prove that point to the last remaining hold outs. “We’re wanting to prove once and for all that all of our daylight maps are real stealth and can be ghosted,” Carrillo told me. 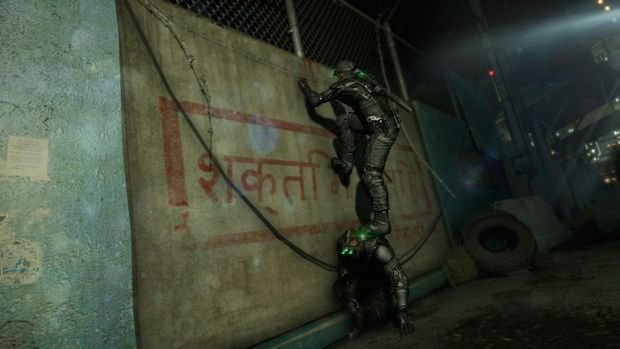 The mission I played, Missile Plant, was one handed down from Briggs, a new character to the series, who player two will be taking control of during missions, with player one as Sam. Since Briggs is an up and comer in Fourth Echelon, this mission placed more subtle, gentler requirements. Sneak into an Indian missile silo, completely undetected, and with non-lethal weapons.

Many of you will remember the big design ethos of Blacklist revolving around three common play styles: Panther, assault, and ghost. Well, that didn’t seem to make the jump over to the co-op very well, but it’s not necessarily a bad thing. As mentioned, missions are tailored with their own stipulations which, naturally, encourage certain ways to play. I can’t exactly play this mission as assault if I can’t use a gun, but this mission did free up towards the end when my partner and I were allowed to use lethal means to take out Voron mercenaries. But even this pushed towards more of an assault/panther role due to the sheer number of mercs and the tenacity with which they rush you down.

All told, Blacklist’s co-op looks like a welcome evolution of what was in Conviction. You’ll still mark and execute, make good use of your gadgets, and stay in constant communication with your partner for a smoother playthrough. Still, I do have one gripe to level against it. It’s a small one, and more of a pet peeve, but why did this mission need to end with a set-piece moment? Coming off of a mission with a great balance of traditional stealth, and more aggressive play, the whole things ends with a sequence that has you running out of an hangar as Voron agents and the Indian military shoot it out, and of course explosions are going off everywhere as the camera shakes and you rush towards evac. Call it a sign of today’s increasingly homogenized approach to design, but I just call it jarring and honestly unwarranted. 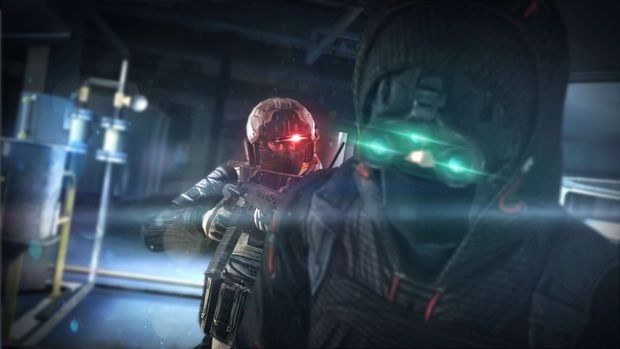 One of the more ingenious takes on adversarial multiplayer, Spies vs. Mercs, makes a return in Blacklist after a notable absence in Conviction. Remember when I said I had an inexplicable obsession with Chaos Theory? Well Spies vs. Mercs certainly fed that. The mode is largely the same in Blacklist as it was in previous iterations. Spies have access to fancy flash bangs, EMPs, recon goggles that can tag enemies, among other goodies, and have exclusive access to the more vertical elements of a map. Vents, ledges, and rooftops are all fair game as hiding spots.

Mercs on the other hand, play from a first-person perspective touting large guns, mines, and insane amounts of body armor. They can’t climb or run particularly fast, but are walking death for any spy that tries to take one head on. If you’re a spy, you will want to wait for the opportune moment to come in for a close instant kill.

The objective is simple each time. Spies have to hack three data terminals, keeping their hacker alive as the upload goes on. If your hacker is killed, you have a narrow window to resume the hack without a hard reset. Mercs need only kill the spies and protect the terminals. New to Blacklist’s iteration is a a progressive leveling system, allowing you to make custom classes to spec out your spy and merc. We didn’t get to mess around with the customization though, so I can’t say from first hand knowledge how deep it goes. 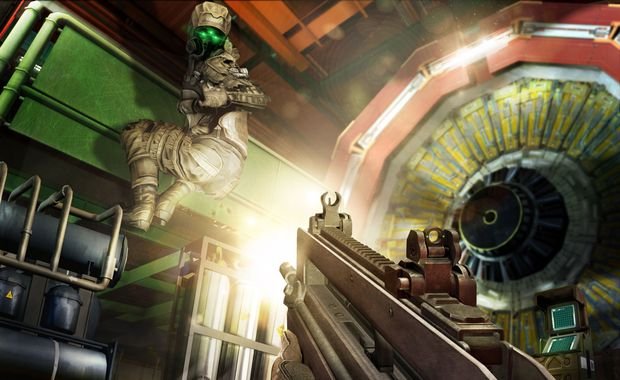 The most notable addition has to be the fact that games can now be played with up to eight players in four versus four matches. This makes the game, to say the least, considerably hectic. There are changes that come into play depending on the number of players, namely an increased emphasis on light and shadows. If you’re playing a classic two versus two game, maps are dimly lit, with key areas and objectives marked with bright lights, and Merc flashlights that carry considerable range. If you have a full eight player game going, maps are generally much more lit throughout.

This simple change does an admirable job of preserving the core hunter killer gameplay, but classic two versus two is still my preferred option. Matches simply get to hectic playing with eight people, and a considerable amount of tension is lost. Playing classic is the same snatch and grab, seek and destroy goodness you remember. Darker environments means a slower, more methodical pace, as opposed to the shooting galleries that eight player matches started to devolve into. Hopefully a three versus three mode will provide some sort of tolerable medium.

Still, I have to say I was very pleasantly surprised with Blacklist’s multiplayer offerings. Spies vs Mercs is still a blast to play, and if you were a fan of Conviction’s co-op you’ll find plenty to love here.