Can you fly, Bobby?

After 24 hours of inking mayhem, the results from Splatoon 2’s latest Splatfest are now live. The scores were announced a bit later than usual, as the decision was made to combine the U.S. and European totals.

In the battle of the superpowers, Flight soared to victory over Invisibility in an incredibly close 2-1 victory. Though Invisibility took the votes, both Solo and Team turf wars went in Flight’s favour.

Of the close finale, the Splatfest representatives had much to say. Pearl, who was backing Flight, mused “BLAM!” This was then shrewdly counter-pointed by the loser, Marina, who said “BUH-BAM!”

Cerebral chess at its finest. 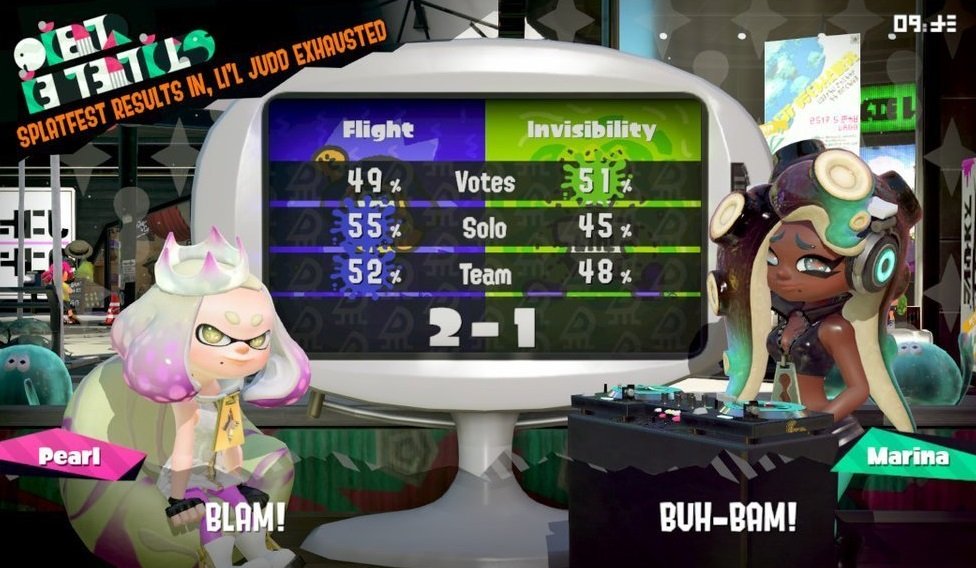 Marina, who had previously suggested that invisibility would allow you to “Spy on people while they were… inking their Splat Zone”, looked like she was going to cry at the final results. You probably contributed to that.

The next Splatfest, taking place in Japan, will see McDonalds Fries battle McNuggets to ascertain which tastes less of medieval torture (possibly). It begins on September 9 at 3pm JST.

The #Splatoon2 #Splatfest results are in! Drumroll please…#TeamFlight wins, 2-1! Congrats!
(This result based on NA and Europe battles) pic.twitter.com/GYtvCDBONn