This weekend, Japanese Splatoon 2 players met on the battlefield in the country’s latest splatfest. The Nike-sponsored face-off asked: When it comes to your consumer choices, do you prefer buying “What’s New” or “What’s Popular”? I’ve said it before and I’ll say it again, that’s such an uninspiring topic, easily one of the worst to date.

Regardless, Japan’s squid-kids went to war over the consumerist nightmare. Once the fumes cleared, Marina’s “Team Popular” (sporting Air Max 95s) lost big time in the public vote, but just squeezed by in Solo and Team Play to take the 2 – 1 victory. Pearl’s “Team New” (rockin’ Air Max 270s) can console themselves with a 60% win in the public vote.

It was a close call, but chalk up a win for Marina and her trend-following sheep. Now, let’s get back to more serious matters, such as which way you hang toilet paper. As least we got the cool header image above starring Off the Hook. It’s FIRE… that’s what the kids say… right? 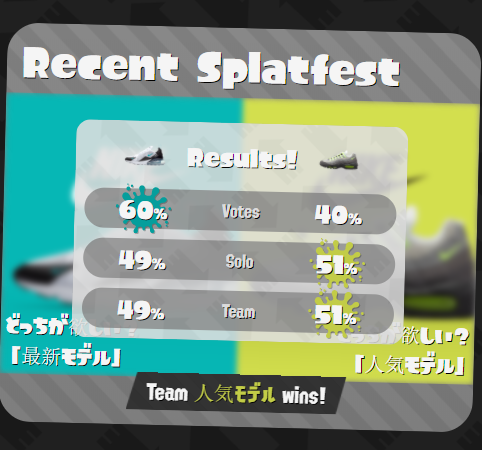