The coolest motherfunker on the Switch

The mood of the Nintendo Switch Preview Tour event in San Francisco was electric the whole way through. With music blaring and lights splattering the crowd with the many hues of the rainbow, it was the perfect setting to check out one of my most anticipated games: Splatoon 2.

I’ve been playing Splatoon for so long that it’s tough for me to believe it’s been less than two years since it was first released. Though a bit hollow in its debut, subsequent map and gun additions over the next few months transformed the colorful title from a must-play Nintendo game into a bonafide reason to own a Wii U. I put close to 70 hours into that game, wasting many weekend afternoons painting the floors of some of the most imaginative multiplayer maps ever created. It was the first multiplayer shooter that I could actually be a decent sniper at, though I much preferred taking down squids and kids with my .52 Gal Deco.

Since I moved, I haven’t been able to play Splatoon, so when I attended this past weekend’s Preview Tour event, it was the first game I gravitated towards. Nintendo set up two stations for it in the corner of the room, one on TV screens with the Pro Controller and one using the Switch as a portable. My first hands-on was with the Pro Controller. It’s light and felt fine in my hands. Not sure if it’s worth $70, but serious gamers I imagine will get more than their money’s worth.

The start of the demo is similar to the start of the original game. You’re asked to move around the environment and shoot down balloons. Motion controls are turned on automatically, which took me a bit to adjust to. I used motion controls with the original game, but not at first. It was something I really had to dedicate myself to learning, and often I would give up too easily. Eventually, I came around on the setup and now proudly preach the gospel of combining a standard controller with motion-assisted aiming.

With the Pro Controller, the motion controls work exceedingly well. I was able to pop those balloons no problem before the start of our 4-on-4 match. Between the training and the start of the match, we were given the option to choose our weapons. Shooter, sniper, and roller were all available as was the new Splat Dualies. Of course, I picked the duel-wield option because it’s new and it’s cool looking. After a short wait, in which there were no mini-games to play, the battle began.

Our team lost that first match and I was to blame. Turns out I had been out of the game for too long with the motion controls taking more time to readjust to than I anticipated. I dragged the team down, but the thrill and excitement I first experienced 21 months ago came rushing back into me during that match. It felt good to be back in Inkopolis and this stage, The Reef, was the perfect welcome mat for me and my fellow players.

The Reef offers some of the best aspects of stages from the first game and greatly reminded me of the wonderful Urchin Underpass. There’s a big open area in the middle with a bridge over a barren aqueduct, multiple points of entry to the center area, and easy-to-overlook spots you’ll need to paint if you want to win; it’s perfect for this demo. It’s also a lovely looking stage when covered in contrasting colors.

My second round with the Pro Controller went a lot better. We won, with around 65% of the ground covered in our paint. I was able to collect 10 kills in the process and only died twice for my trouble. Two rounds with the Splat Dualies got me used to the gun, but other mechanics such as the ability to roll and the new Inkjet special weapon eluded me. 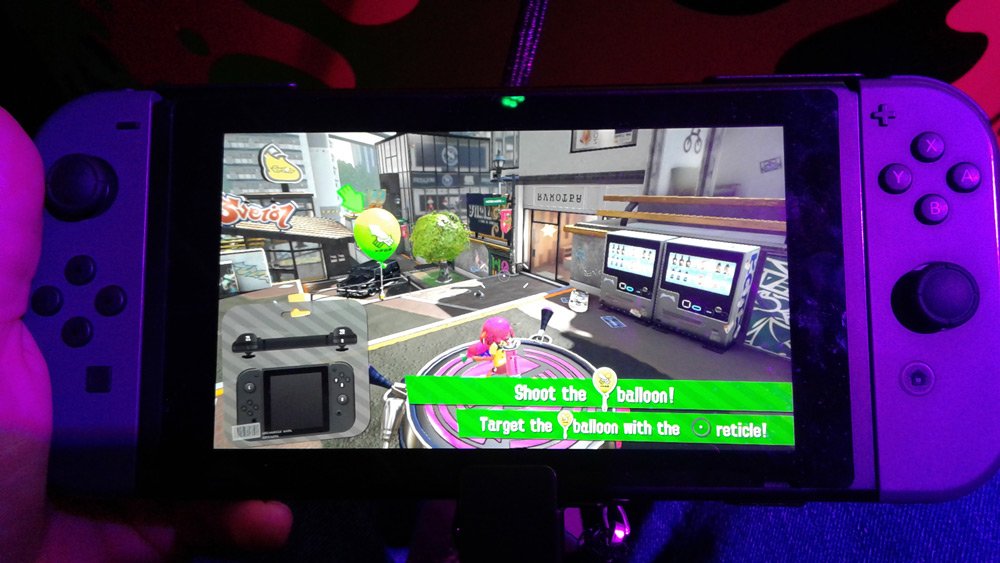 About an hour later I crept back over to the Splatoon 2 station to try it out as a portable. Again, motion controls were standard and now I was basically an expert with them. If you’re wondering about any graphical downgrades playing on the tablet, I am not the person to ask. While it doesn’t look astoundingly better than the previous title, the frame rate didn’t flinch at all and that’s all I really care about.

As for how it controls, the Joy-Con controllers worked like a charm for me as I pushed my roller around the stage, laughing to myself as I eliminated our opponents who were all probably around 10 years of age. The roller had a new special weapon called the Splashdown, which has you punch the ground like you’re Iron Man coming in for a dramatic landing, spreading paint all around you. Unlike the Inkjet mentioned above, this special was easy to use at first, second, and third glance.

Splatoon 2 looks like just Splatoon, and I’m okay with that. It’s an iterative update but not everything released has to be groundbreaking and transformative. Nintendo has taken what worked with the first game, which is just about everything, and brought it over with new guns, new stages, new styles, and a new storyline that picks up two years later. And quite frankly, that’s all I really want from Splatoon 2.