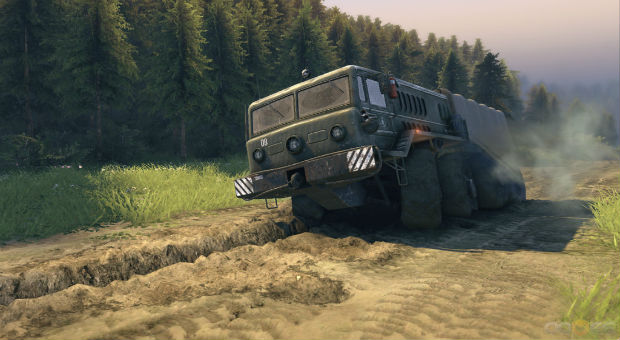 Have you ever wanted to drive straight into trees and punish them with reckless abandon for daring to grow wherever they want? Spintires is the game for you. Watch as you abuse forestry and mow down foliage, get stuck in mud and gravel pits, do some casual logging, and get stuck again. Then tow your buddy because Master, they’re in a tight spot! This trailer truly is gold. I love the mundane activities set to dubstep.

Spintires puts you behind the wheel of a myriad of Soviet vehicles, where you’ll complete missions like the ones you see in the trailer in the Russian wilderness. I’m actually excited to play this game and use my own inappropriate music over it. If you’re interested in playing, you can check out a tech demo at the official site, and the game itself is scheduled for a June 13 release. Each preorder comes with a Steam key, so take care of that, if you’re so inclined. Me? I’m gonna keep watching this video over and over. Моё судно на воздушной подушке полно угрей!