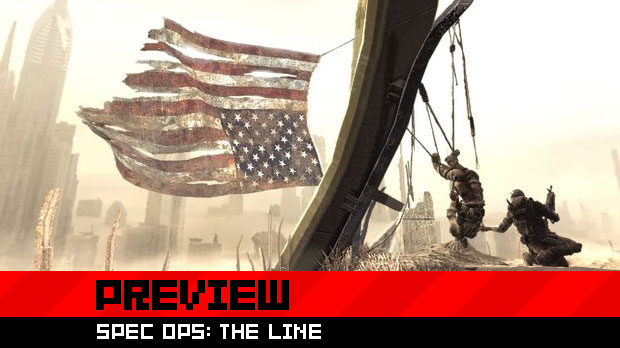 Cory Davis, lead designer on Spec Ops: The Line, didn’t waste any time in our preview session — he began by stating that The Line will be “the most provocative shooter you [will] ever play.” That’s a pretty bold claim, but that type of big talk is needed when the market is saturated with military shooters.

After getting a taste of what Spec Ops is aiming to do, it was easy to see why Cory was so confident when boasting about the title. The sand mechanics will give an interesting new twist on gameplay, and the heavy focus on the narrative is sure to impress, especially those out there simply expecting another dull shooter.

Read on after the break to see what Spec Ops: The Line is doing to move the military genre forward.

Dubai as we know it is a place of architectural splendor, powered by advancements in technology. As great of a city as it is, it’s still surrounded by a sea of sand. In The Line, Dubai has been getting ravaged by devastating sandstorms. Army Colonel John Konrad and his battalion of soldiers were aiding in evacuation efforts when the Colonel was ordered to abandon Dubai due to a large sandstorm heading their way. The Colonel refuses and stays to continue helping with the evacuation. The sandstorm hits and it’s bigger than anyone could have possibly imagined. The Colonel and everyone else left behind are presumed dead.

Two years later, a very weak distress signal is picked up coming from Dubai, which prompts the military to send in a three-man team led by the main character, Captain Martin Walker, to investigate the signal and retrieve the Colonel if he’s still alive. It turns out that the Colonel is indeed still alive and he’s gone a little crazy.

The demo we were walked through is near the beginning of the game, and it’s part of what was shown in the debut trailer from the VGAs. The Captain is looking over the hung corpses of fallen soldiers while the Colonel asks the Captain if he still intends to rescue him. The Captain and his team are then fired upon by a large group of soldiers from a nearby building.

The player immediately takes cover behind a concrete barrier and orders his men to move off to his right. You’ll have basic control over your squad and you can issue orders such as telling them where to move to, regroup and attack. Your teammates will also have certain specialty abilities that you can call upon during battles. Your squad is as much involved in the story as the main character, so while the squad seems to be competent enough on its own, you’ll want to watch their backs.

After a few minutes of fire exchange, an RPG blast impacts the area near Captain Walker and destroys the roof that was hiding below the sand. As sand pours into the building, the Captain hangs onto the barrier he was hiding behind and continues to shoot anyone he can from his position. After clearing some of the enemies, Walker drops down and joins his teammates who fell in before him. They don’t have much time to recover as the enemy forces continue to attack.

The shooting dies down after a little bit but you can tell you’re not out of harm’s way yet. You can see soldiers running around above you. Stupidly, they’re running right over glass, so the player can shoot out the glass ceiling and watch a couple of soldiers fall to their death for a cheap laugh. You won’t have much time to laugh, however, as the baddies drop down a bunch of C4. Walker and his men make a mad dash out of the building as the bombs explode behind them.

The team is able to catch their breath in the next section where they come across a small camp of civilians taking shelter in the next building. Somehow, against all the odds, these people have managed to survive. The team is walking among the civilians when they hear one of the enemy soldiers demanding that a civilian tell him where Captain Walker and his men are. The poor civilian has no idea what’s going on and gets shot in the head. This sets off Walker, who rushes the soldier and beats him to death.

In the next room, the enemy is lining up civilians for execution and this is where we see how the moral choices works in The Line. There are no simple pop-ups that appear, giving you the good or bad choice. Rather, it’s all up to the player to make the call on his own. You could send your teammates forward so your team will have an advantage over the situation. If you do that, though, the civilians could all get executed in the time it takes for you to get set up. In our demo, the player doesn’t waste time and immediately opens fire on the enemy.

The enemy forces start to become too much to handle, so Walker shoots the large windows behind the enemy group. Walker and his crew are well above the enemies on the floors below, so they’re perfectly safe as the sand comes flowing in and crushes everyone below. The player could have also shot out the windows at the very beginning and saved themselves some trouble. Of course, the player would be crushing all the civilians below and more enemies could still come from different areas of the building.

Sand can also be used to find alternative routes. If there’s a room filled with sand, you can shoot out a window to let the sand out and give you access to the place. We can expect frequent sandstorms during the course of the game as well, which will alter the gameplay and can either help or hurt your progress.

Your team will evolve as the story unfolds in The Line. They start out as a very close-knit team, but the story will take its toll on the characters. The way they look, their attitude, the way they talk — everything changes as they become more and more desperate based on what’s happening. It’s not so much a good or bad moral choice, but rather a bad or worse choice. War isn’t as simple as good or bad. War is about that line a person has between what they think is right and what they’re ordered to do. War blurs that line. There will be multiple endings and your choices will determine the ending you get.

The narrative plays an important role in The Line. YAGER wants people to care about these characters and feel what they’re feeling as they do what they must over the course of the game. The dialogue will also adapt based on the situation. During the last firefight, a rocket explosion goes off near the team and Walker orders his sniper specialist to “take that fucker out!” The more stressful the situation, the more the dialogue will reflect what the team is currently feeling.

The build we were shown was in pre-alpha state and aside from a few noticeable graphical issues, Spec Ops looked very good. It wasn’t as good as in the debut trailer, but YAGER has all this year to get the game all prettied up. The screen is also free from clutter. All you see on screen is your gun reticule, your ammo counter on the bottom right of the screen and the occasional pop-up prompts.

From these initial impressions, I have to say that Spec Ops: The Line will be a game a lot of people will be looking forward to when it’s released later this year. The sand mechanics don’t look like they’ll be gimmicky and the huge focus on narrative should definitely please those that are sick of what we get in most shooters right now. Seeing as this is a military shooter, there will be multiplayer modes as well, but we won’t be hearing much about it until E3 later this year.