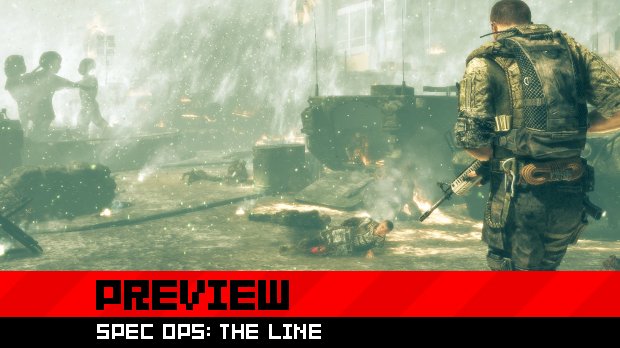 I don’t like the current market saturation of military shooters. I think they’re mostly brown and boring, while the emphasis on multiplayer leaves me even more disinterested. When I read our preview for Spec Ops: The Line, however, I couldn’t help but grow curious, given the promise of a strong narrative focus and a much more ambiguous presentation of warfare. After all, while I’m not too keen on most modern war games, I do love a lot of war films or literature — there are interesting things to say about the human condition everywhere, but perhaps especially in times of war.

I played a couple of hours from the first half of the game and I’m optimistic about it delivering on its claims. The Line is undoubtedly a tight third-person military shooter, for those who aren’t looking for much else, but beyond that I saw hints of personality and substance that I hope come to fruition over the course of the full game. 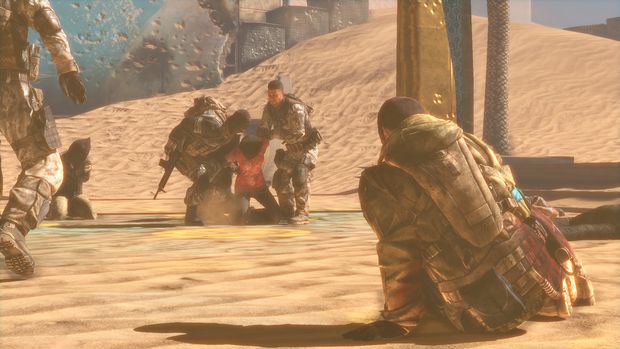 I was initially struck by The Line’s title screen. The selectable options were presented plainly, in the bottom left corner of the screen, while the background displayed a tattered American flag, beating in the breeze amidst a seemingly war torn, sandy environment. As opposed to some heart pounding, bass laden orchestral score playing as I sat at the screen, looking over my options, there was simply the calm, imperfect melody of “The Star Spangled Banner” being played on an electric guitar.

Selecting “New Game” caused the camera to pan around and suddenly, seamlessly, the story had begun, and I was in a helicopter, on a mounted gun, tossed into the fray without a word of explanation. This introductory sequence is a harbinger of things to come in what looks to be a nebulous web of intrigue. The game proper, after a bit of exposition, puts you the shoes of Captain Martin Walker, voiced by Nolan North (Nathan Drake).

Walker and his crew are tasked with locating an unexpected radio signal coming from a ruined Dubai and, hopefully, rescuing any survivors. Half a year prior to Walker’s mission, Dubai was hit by a massive sandstorm that left the opulent city in shambles and refugees abound. Colonel John Konrad, leader of the 33rd, and his division were on a mission to escort civilians out of the city when another enormous sandstorm hit — they’re a recurring thing, hence the city being ruined — and the 33rd went off the grid. 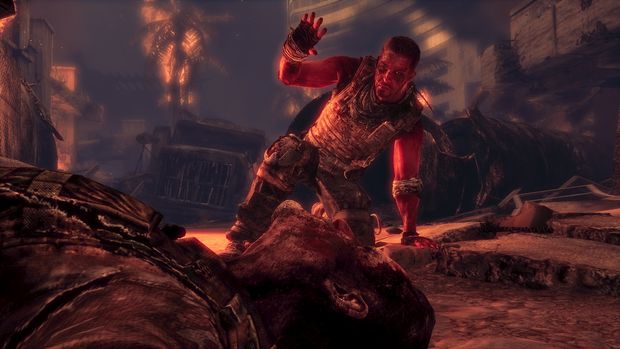 The three men start their mission nonchalantly working their way through the sands towards the site of the signal, bantering back and forth. Things quickly turn gruesome, however, and a simple rescue mission begins spiraling out of control. Before you know it, the CIA is involved, the 33rd are still around, and the whole thing is a big mess. Rather than pit you against the trusty Russians, some nondescript, Middle Eastern terrorist sect, or some other group easily classified as “bad,” you’ll spend a lot of time killing familiar US soldiers.

The game is rife with obfuscation and there’s never any time to try and sort things out — you have to keep shooting. During my entire hands-on time with the game, I never felt quite comfortable killing people. I never knew who to trust, or if I was killing innocent people. I’ve felt this feeling before in games, like during the sections of Uncharted 3 that saw me massacring dozens of people at a time, but this is one of the rare times where I feel it’s intentional and adds to the point of the game.

Though both Drake and Walker are voiced by Nolan North, this time the protagonist wasn’t spouting off quips and one-liners. Rather, he seemed to realize how FUBAR the situation was, like I did, as the player. My only fear is that the gravity of taking a human life will, for the player, eventually be dulled by how many people you’ll have to kill over the course of the game. It clearly won’t be the case for Walker and company, however, as what turns into a journey to the center of the city to get to the bottom of things begins to wear heavily on them, causing a loss of their initial positive disposition, some infighting, and internal turmoil. In particular, I’m told The Line aims to screw with the player’s mind partially through Walker’s own mental instability as the story progresses. 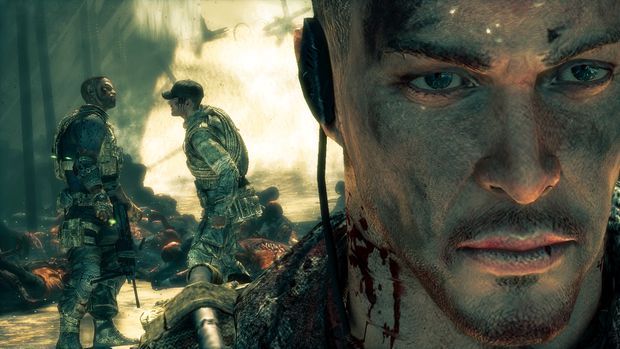 The Line takes cues from a lot of famous war films, but the parallels between it and Apocalypse Now stood out to me the most. Probably because, at one point, I entered a firefight (with people I didn’t know if I should be killing or not) and Deep Purple’s “Hush” started playing over a PA speaker. As I sat there, tapping my foot to a familiar song and killing, the surreal nature of that scene hit me. Oh, and the PA speakers strung up throughout the city seem to be run by a Good Morning, Vietnam-style deejay.

As for the rest of the gameplay bits, a few things stood out. First, the game stands up on its third person gunplay alone. Anyone who wants to shoot the dudes will find something to like in The Line — there will even be multiplayer, though the details are still being withheld. The controls are tight, and there were a few nuances that stood out to me, like the ability to “slip out” of cover, head down, and move fluidly between cover. The shifting sands, which are impressively done, also come into play throughout the game; at one point, I shot out some glass and buried a whole bunch of people beneath a good ten or twenty feet of sand, while sandstorms will also intrude on firefights, obscuring your field of vision and altering the landscape.

Still, the atmosphere and and narrative potential are the most enticing aspects of Spec Ops: The Line. The imagery is striking, as you traverse war torn streets adorned with hung or mutilated bodies and see the juxtaposition of the remnants of the metropolitan Dubai architecture and the moral travesties currently occurring. The game never lets you get comfortable and it even plays on some modern expectations quite poignantly, like offering an “execution”-style finishing opportunity for downed enemies that feels remarkably unsettling and inhumane. The Line looks to be the necessary antithesis to the chest beating military shooter genre, one that gives form to the uncertainties held by the people at the center of war.