I’ll admit it: when I first saw Spec Ops: The Line’s debut teaser back at the Video Game Awards a couple of years ago, I kind of just shrugged it off. It looked cool, but not to the point where I was hooked into following it from then on, so, I pushed it out of my mind.

You may have even thought 2K themselves ditched The Line, what with the lack of coverage in the recent years. That couldn’t be further from the truth. The Line is still alive, and 2K utilized the last eighteen months gathering and working on feedback given from what was originally shown of it, and reworked the game into what it is today.

I wasn’t quite excited walking into my two-hour demo of Spec Ops thinking I was going to be bored the whole time. However, I walked out a completely different person.

The Line is a military shooter, yes, but not in the typical “rah-rah” pro-war nonsense. The Line focuses heavily on the depth of the characters, and how they change dramatically during the course of the campaign. Where things start off as a cool, laid back kind of experience where you are essentially walking nonchalantly toward your objective, you soon learn the deeper backbone of the mission on task, and what exactly the results are caused by the antagonist.

The back story is that Col. John Konrad, leader of the Damned 33rd, was sent to Dubai to rescue civilians after a devastating sandstorm tore through the city. When attempting to get civilians outside of Dubai, they were hit by the worst sandstorm of all, and Konrad nor the 33rd were heard from again. 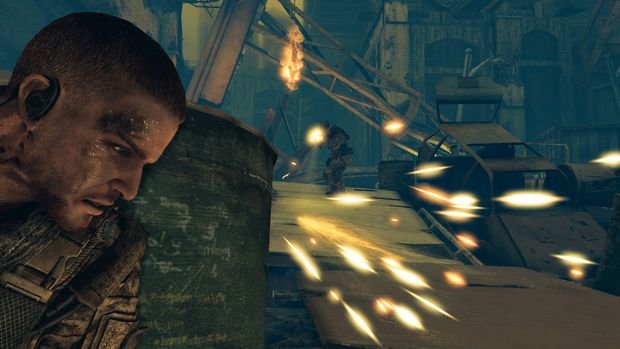 Six months later, your character, Capt. Martin Walker, voiced by Nathan Drake’s Nolan North, and your rag-tag teammates are sent to the destroyed Dubai after a radio signal is picked up from there, with the sole mission of locating and rescuing any survivors.

And that’s about the long and short of the plot, without spoiling anything, of course. Upon entering Dubai, things quickly start to turn for the worst, and a simple rescue mission soon unfolds into a desperate struggle for survival. Everything unfolds in a satisfying, cinematic fashion, which is so satisfying, in fact, that I can even confidently compare it to that of Uncharted. Yes, The Line’s cinematic pacing is that good.

Cut-scenes smoothly transition from movie to gameplay with just the pan of the camera, and wild bits of excitement and set-piece moments have the camera shaking and angling appropriately, adding to the experience that Spec Ops is more than just a game — it’s a journey. That journey is geared toward being an emotional one. Through the course of the game you are asked to make decisions based on the mission at hand. As the story evolves and the game becomes darker in tone, so do the decisions. 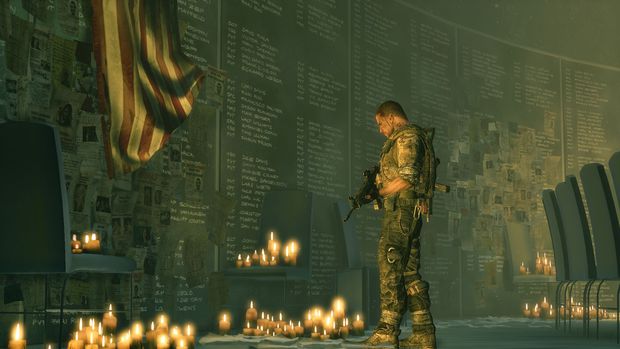 The choice given to me was deciding who should die: a father who stole water for his family or the soldier who caught the him and killed his wife and kids. The two men are hanging from a bridge with snipers watching both of them, and a credible threat leaves me with little time to act.

I sat perplexed for a few minutes, and hadn’t the slightest clue as to what I should do. While my first instinct was to be my evil self and kill both of them, I felt uneasy at that thought here, possibly because how real the scenario felt. The father did steal water, but it was for his family who was now killed by the hand of the soldier. But, I’m playing as a soldier, so does my allegiance lay there?

Ultimately, I killed the father, and I am not proud of it. But that is exactly the type of excellent experience Spec Ops: The Line offers. You will make decisions that you’ll hate yourself for in the end, no matter which way you go. You realize that sometimes there isn’t going to be a winner. In my case, someone had to die, no matter what, even if I chose to end both of the snipers. 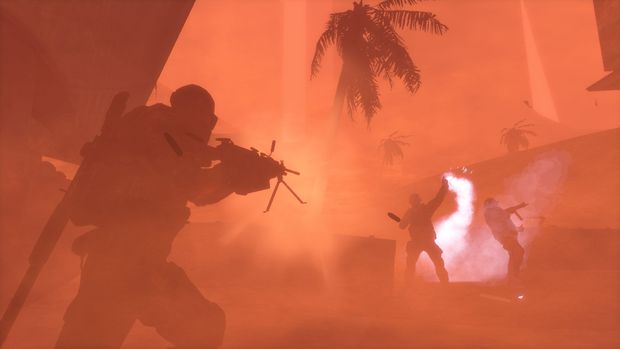 I evolved as a player during the course of my demo with Spec Ops: The Line, and walked away looking at the rationale of the decisions made. This even boiled down to whether or not I should perform Gears of War-style executions on the enemy, which I had done with excitement in the beginning, but ended up shooting mercy shots at them in the end.

This same sense of character evolution is also reflected on your teammates, who become more weary on what needs to be done in order to survive, and lose their light-hearted, humorous vibes as the realness of the mission becomes clearer to them.

Gameplay-wise, The Line plays out like a standard third-person shooter: there’s a cover system, there’s the ability to blind-fire, and you can give commands to your teammates at the press of a button. 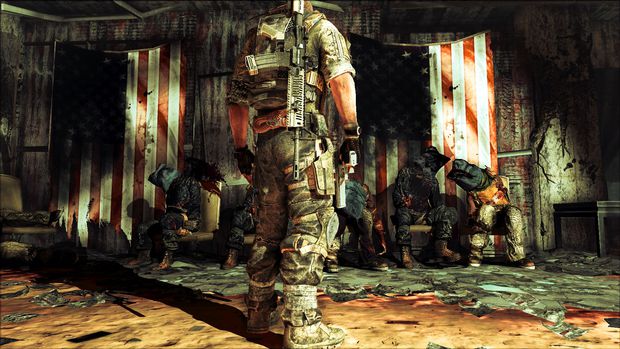 The shooting feels intuitive and responsive, as does the command system. Pressing and holding the right bumper over an enemy will highlight them, and you teammates will effectively take them down. This aspect also comes into play when you are required to be stealthy, and your teammates will attach their silencers and quietly end the opposition.

While there is a multiplayer component, which will be revealed later on, Spec Ops: The Line is fully set on offering a dynamic campaign that has you question your ethics of combat, something that hasn’t really been touched on in a third-person shooter, or a military shooter, for that matter.

I gave a great big sigh of relief as my demo concluded, and not in joy that it was over, but in that I finally had a moment to reflect on everything. It was then I realized Spec Ops: The Line just slapped me in the face with its superb offering, and made me regret ever doubting it.