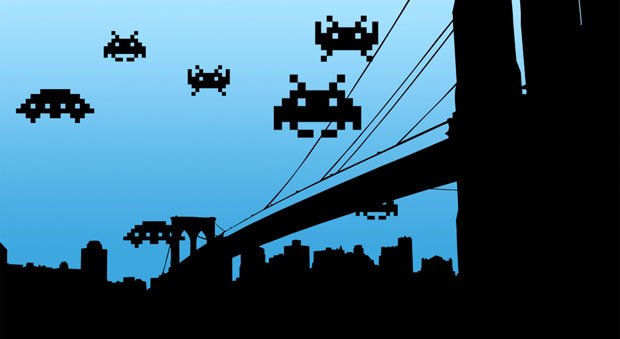 Being the massive Space Invaders fan that I am, I’ve had an ear open for any word regarding a little-known addition to the franchise, called Space Invaders: Infinity Gene. Originally a Japan-only release for mobile phones, it was looking like we’d never see this one come stateside, but Brandon Boyer over at the lovely Offworld has just received word from Taito that the company will indeed be bringing this delicious new addition to us via the iPhone.

It’s quite a departure from the norm in terms of recent Space Invaders makeovers like the Extreme series, with a razor-sharp, monochromatic vector look more akin to the original from 30 years ago. What really sets it apart, however, is the gameplay. Infinity Gene features elements often seen in the more modern shooters it inspired: warning screens, huge bosses, rapid-fire weapons, navigable environments, and most interesting of all, freedom from the X axis.

A series first, you’ll be able to move your ship anywhere on the screen using touch controls. That’s kind of like walking into a room to find your grandpa breakdancing. Adding to both the awesome factor and retro appeal, Infinity Gene also features a low-fi, chiptune-esque soundtrack that ties the whole deal together into something that has finally made me want a goddamn iPhone.

Very exciting stuff for Space Invaders fans, and we’ll keep you updated as more info surfaces. In the meantime, you can check out a video of some gameplay after the jump to get an idea of just how cool this looks.