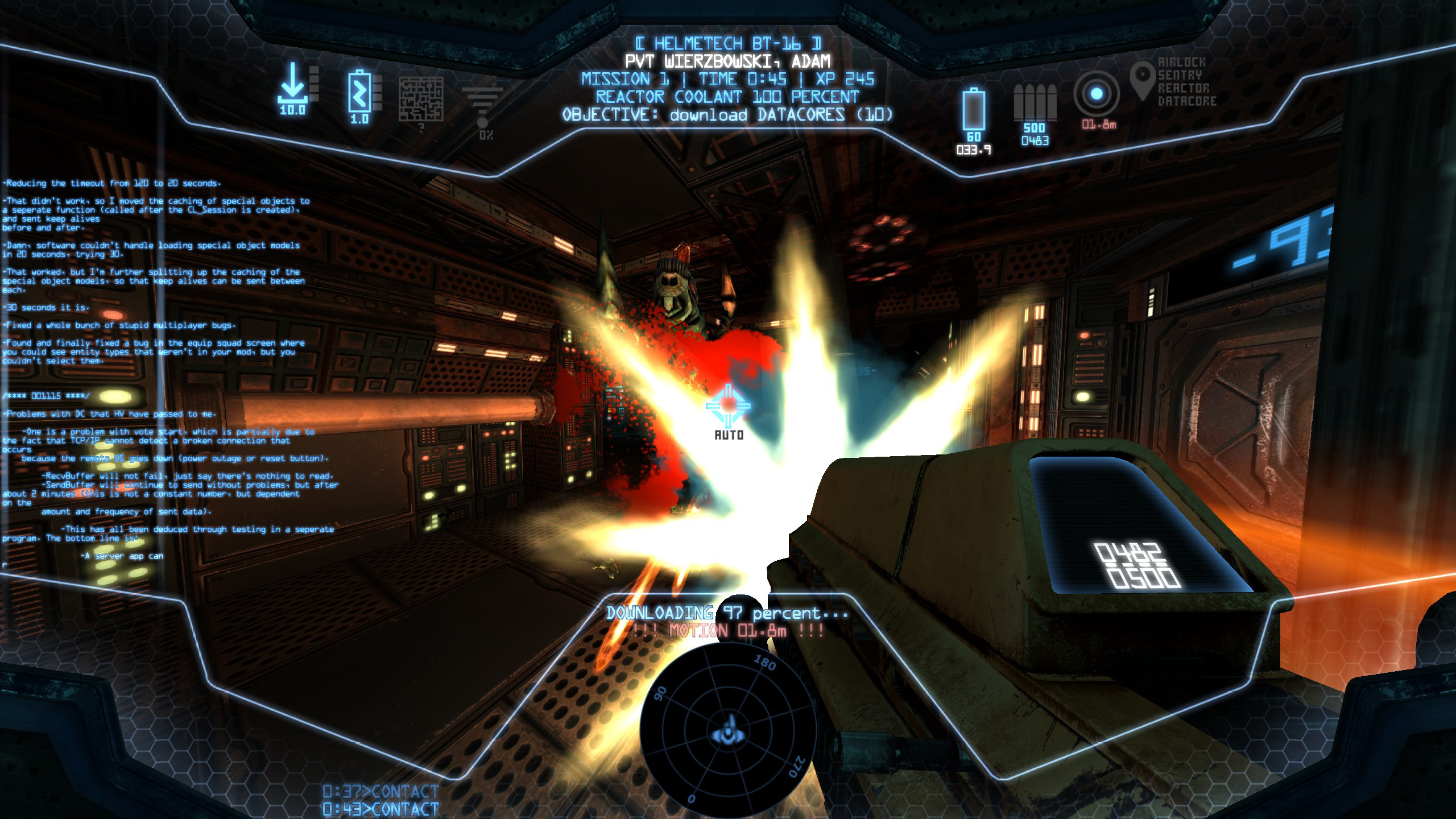 I got 99 problems but a breach ain’t one

[Disclosure: The developers put my name in Space Beast Terror Fright‘s random name generator along with a bunch of other people who showed interest in the game early on. As always, no relationships, personal or professional, were factored into this post.]

Welcome to another glorious day in the corps, marine! Where every meal’s a banquet, every paycheck a fortune, and every mission will most likely be your last! So it is in the tough-as-nails FPS roguelike Space Beast Terror Fright — you live in the moment, leverage every advantage the RNG gods send your way, and push your luck and skills as far as they will take you until you either complete your mission or die trying.

The objectives in Nornware’s Aliens-inspired roguelike shooter are deceptively simple — board an infested spacecraft, find and download a set number of DataCores from terminals spread randomly throughout the ship, find and disable the ship’s reactor cooling system, then hustle your ass back to the airlock for extraction before the ship destroys itself from the inside out.

While the mission sounds straightforward enough, accomplishing it is by no means an easy task. From the moment you step through the airlock you’ll find yourself in a claustrophobia-inducing, procedurally-generated maze with no map, only the most basic motion-tracking capability, limited battery life for your light source, and 500 rounds of ammunition.

It’s a nicely balanced starting point and does a very good job at maintaining a creeping sense of uncertainty each time you board a ship, while ensuring you have enough tools to stay alive for the time being.

Battery life, motion tracker capability, and ammo count appear to be constants at the beginning of each run; however, the one inconstant I’ve noticed is the required number of DataCores you’ll be tasked with finding and downloading. The required number changes for most every new run — sometimes the number is as few as six, at other times it can be as many as 20 or more.

At the beginning of each run you’ll leave the security of the ship’s airlock and enter into the infested vessel. You’d do well to stay on your toes from the very outset in SBTF, as you never know when or where the first wave of bloodthirsty killing machines is going to spawn. I’ve had rare experiences where I was blindsided within a few moments of exiting the airlock and I’ve also played through sessions where I didn’t get my first contact until several minutes into a run.

In some instances the alien spawns feel triggered by the player’s proximity, in others, they give the impression that they may be set to occur after a certain amount of time has passed. As such, the spawn points and spawn times feel strikingly unpredictable, which helps a great deal to ensure that every run feels different from your last. 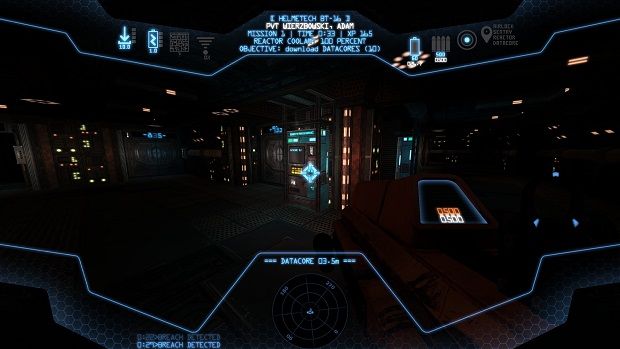 I’ve mentioned the basic tools the game starts you off with, but one of the most useful assets in increasing the odds of your survival is the ship itself. Its numerous hatches can be sealed off strategically to prevent attacks from the sides and the rear, as well as to create multiple layers of security by locking down several hatches in a corridor; however, it should be specified, these are only temporary lines of defense. Once the hoard begins attacking your hatches you’ll need to start planning your escape route as the aliens will quickly cut through the barriers.

Alongside the sealable hatches, the ship also features powerful, AI-controlled turrets, which can be found scattered throughout the map. Once activated, these can be incredibly helpful allies in a firefight as well as competent sentries that will stand watch over sections of the map.

As touched upon earlier, the central mechanic to progression in each run is the collection of the downloadable DataCores that are randomly spread throughout the floor of the ship. These serve two purposes. The most obvious is that they provide a framework for measuring your progression in the level and the second is that they are the means with which you’ll be adding vital upgrades to your suit and equipment.

The rewards for downloading DataCores are selected at random. You could luck out on your first download and pick up a helpful map that displays the layout of the floor you’re exploring or you could get something relatively minor, like a slight increase to your light’s battery. However, if you’re really fortunate, you might get one of the most helpful upgrades you can have early in a run, the DataCore Pathfinder. Even without a map, this powerful upgrade is incredibly helpful for efficiently directing you to the nearest DataCore and is much better than the primitive positioning technology you start out with. 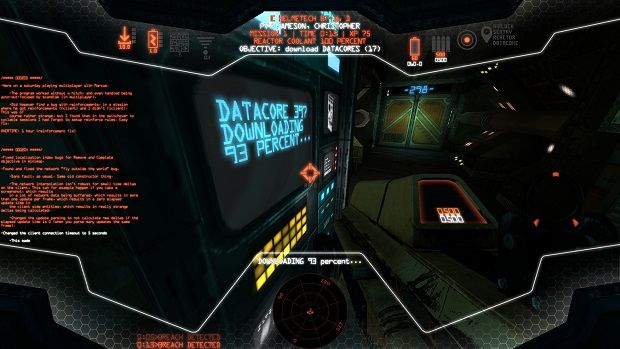 Even if you don’t get one of the better drops at the beginning of a run, more often than not, you’ll get something fairly useful when downloading a DataCore. Whether it’s a marginal but useful boost to battery life, an increase to the rifle’s ammo carrying capacity, or an incremental upgrade to the suit’s download speed, something usually drops to maintain the feeling that the character’s abilities are improving.

As you explore the ship and begin collecting the required DataCores, your HUD will alert you when breaches are detected and when sealed-off doors are compromised. While the information won’t give you an exact fix on where your foes are located, it is a very helpful early warning that trouble’s not far away.

Your basic motion detector can also help out when enemies get close to your position. While the stock version of the detector won’t show the aliens’ precise location, it will tell you roughly how many meters away from you they are; so, by checking each of your possible exit points against that information you can make an educated guess which doorway might be your best bet for escape.

The most beneficial upgrade to have in these stressful situations is the one for your motion tracker. If you happen to have that installed, enemy movement will be displayed on the map as pulsing white blotches, giving you a very good idea on where they are, where they’re going, and where you should be moving next to avoid them. 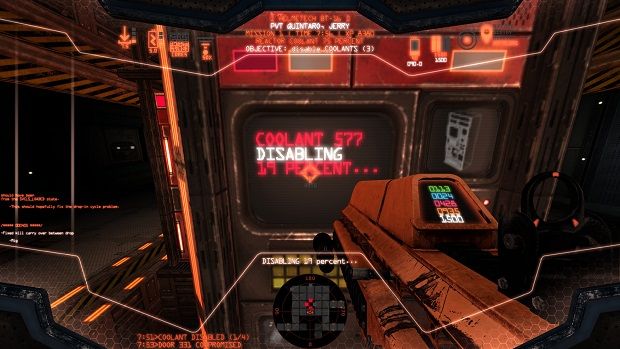 Once you’ve collected all the necessary DataCores, your positioning system will switch over from locating them and begin guiding you to the ship’s reactor. Hopefully by this point you’ve acquired a good deal of the game’s more helpful upgrades, because getting the reactor shut down and making your escape can be the most difficult part of the run and every little advantage you acquired up until this point will be needed.

After locating the vessel’s reactor, you’ll need to activate a switch so that the protective walls surrounding it will begin to rise, exposing the four control panels necessary for disabling the system. At this point in a run, things usually start to get dicey. While you’re preoccupied with deactivating the panels, this gives the space beasts that have spawned throughout the ship ample time to make their way to you, so be prepared to hold your position and keep the panels deactivating. If you move away from one for even a moment, you’ll have to start the process all over again.

If you’ve survived long enough to deactivate the four control panels, the ship will start an anxiety-inducing countdown timer letting you know how many seconds you have left to shoot your way through the hoards as you race back across the ship to the airlock. It’s an edge-of-your-seat thrill ride of a finale and feels tremendously satisfying once you finally make it to the extraction point alive.

The Early Access build of Space Beast Terror Fright is everything I loved about the original demo and much, much more. Since coming to Steam the game now sports local 1-4 player local co-op (online is currently in the works!), new level styles, adjustable muzzle flare brightness, and a slightly less ball-crushing game mode to ease in the newer players.

Space Beast Terror Fright is priced at $14.99 and is available for PC.