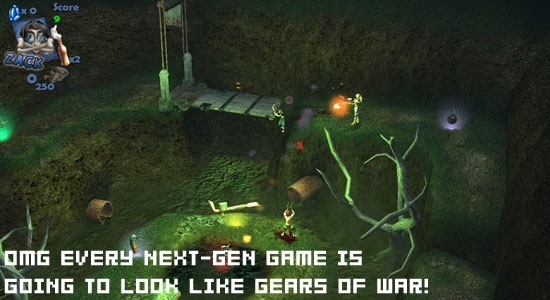 Today, SouthSpeak Games has announced a studio license agreement with Epic Games for use of the Unreal Engine 3 in its upcoming PC games. The first game developed under the new license will be Monster Madness EX: Battle for Suburbia for the PlayStation 3. Hold on … wasn’t the Monster Madness: Battle for Suburbia powered by Unreal Engine 3 on the Xbox 360 and PC? Why, yes! Yes it was.

“Our focus on UE3 technology has been key to our success as an independent studio. This is an ideal opportunity for us to work with SouthPeak on our projects,” says Dave Hagewood, president of Psyonix Studios, developer of Monster Madness. “We’re excited to be working with SouthPeak to bring our upcoming game to market in 2008.”

“We see this as a landmark agreement for Epic and the UE3 technology because of SouthPeak’s focus on independent developers,” says Epic’s Mark Rein as he strokes a mysterious black cat. “They are going to bring UE3 to a group of developers that have fantastic games but would typically have to wait a long time to work with our award-winning game engine.”