While not in the upper echelon of fighting games such as Street Fighter and Marvel vs. Capcom, the SoulCalibur series has enjoyed a loyal following and mass popularity in its ten-plus-year history. With the fifth (proper) installment coming out in a little over a week, Namco Bandai is releasing the original SoulCalibur on iOS. And while it’s disappointing that this tale of souls and swords is only single-player, it’s still a damn good fighter and every bit as fun as you remember. 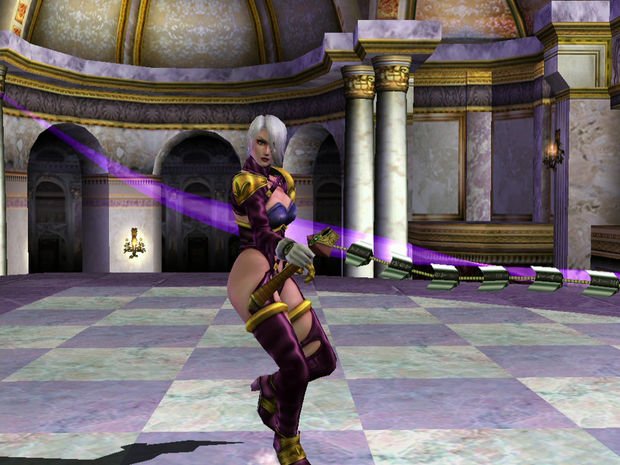 The first thing you will notice in this release of SoulCalibur is just how gorgeous the game still looks. While the art for the main menu is new (it’s actually taken from SC 5), everything in the iOS port is based on the Dreamcast version. There’s no HD remastering here to speak of.

Even so, all of the fighters look great on the iPad’s HD screen, and a quick run through in Arcade Mode shows how well the environments have held up. Also holding up well is the game’s bevy of side modes such as time attack, survival, and extra survival (my personal favorite). From what I could glean, team battle seemed curiously absent; a shame, since it was one of the better modes.

Controls are key to a fighting game, and a huge part of SoulCalibur’s success is due to its ease of play. This release of the game supports the virtual arcade stick layout; a touch joystick in the bottom left corner of the screen and the A, B, G, K buttons on the bottom right. It seems to be the norm for fighters on iOS devices and it works well enough here. I did have to contend with some initial awkwardness with my character crouching when I would try and get him to sidestep, but it became less of an issue the more I adapted to the virtual stick. The buttons layout and placement on the screen can be adjusted as well. I personally found it a bit awkward to have the guard button at the bottom of the screen. One quick trip to the options menu remedied all that, though.

The virtual stick cuts back on button mashing (maybe because there are no buttons). As I stated, a huge part of the SoulCalibur series’ success is its accessibility. While a seasoned pro will never be bested by their mash-happy little sister, here there is no mashing. I tried tapping on the screen like a madman, but even on medium difficulty, the arcade-mode AI was forcing me to remember guard breaks, how to parry, and keep other mechanics in mind. 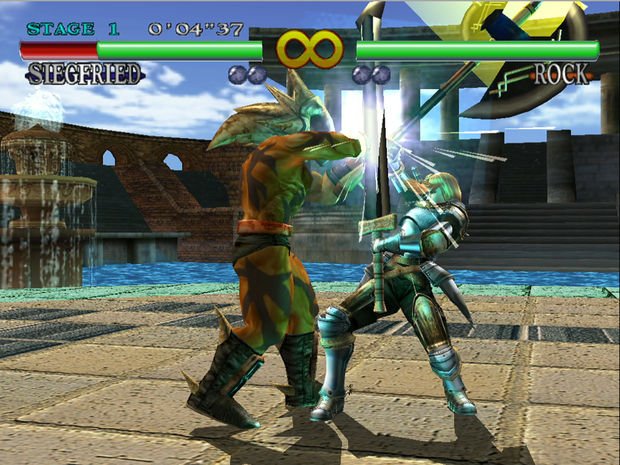 From what I can tell, the curbed button mashing comes from the fact that all the button inputs are separate. As longtime players know, SoulCalibur games on consoles often use the triggers and bumpers as shortcuts for more complex commands such as A+B+K. This is to make up for the fact that button inputs are harder on a gamepad. This brought on the infamous amounts of button mashing as newer players pounded face buttons with shortcuts, and often pulled off some usually complex moves. Now that the commands are separate, I can’t see it happening as frequently. Trust me, I really did try.

Again, it is disappointing that this re-release of SoulCalibur doesn’t have any sort of online or offline multiplayer. It’s rare that a game feels and looks about as good as you remember, though this is one such game. As fans get ready to feast on the upcoming SoulCalibur V, we would do well to remember the original tale of swords and soul.