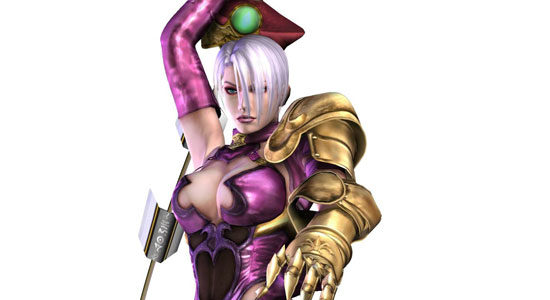 Namco Bandai has announced that Soulcalibur Legends, the upcoming third-person action adventure spin-off title for the Wii, has gone gold.

I wish there were more story here, but that’s really it. The game is set between the events of Soul Blade and Soul Calibur (before it was one word), and follows the exploits of Siegfried and other series regulars. The game will be in stores on November 14, where it will be ignored in favor of some game called Super Mario Galaxy.

If you hit the jump, you’ll have the pleasure of reading the press release! Oh my!

SANTA CLARA, Calif., (November 1, 2007) – Souls are burning with anticipation as NAMCO BANDAI Games America Inc., announced today that Soulcalibur Legends™ has gone gold for the Nintendo Wii™. Exclusive to the innovative console, Soulcalibur Legends reinvents the unparalleled weapon-based fighting franchise and immerses players into a third person action adventure game. Making evolutionary strides in the series, the Wii’s intuitive controls will be the weapon of choice that provides an unmatched gameplay experience complete with various modes of play, a unique combat system and classic roster of Soulcalibur characters.

Set between the events of Soul Blade and Soulcalibur, Legends follows the exploits of Siegfried and other familiar characters from the series as they find themselves on a quest for the ultimate power. Weapons and warriors will clash as they endure to unify the pieces of the Soul Edge sword, the very element which leads to Siegfried’s inevitable possession by the cursed blade.

In Soulcalibur Legends, use the Wii Remote and Nunchuk to master orchestrated attacks to crush scores of enemies or large bosses. Battle through more than 10 diverse stages and environments in the single player Quest Mode; rising through the ranking system to earn the honored titles of Knight or Soldier. Players can deliver a one-two punch by switching between their character and an ally for more versatility in any given situation. Gamers can also put their skills to the test in a split-screen Co-op Mode, compete against a friend to defeat the most fearsome enemies in Competitive Mode, or spar in Versus Mode to determine the true Wii weapon master.