I am not the funny friend. I’m not a performer, either. In any social situation, I’m good for either two half-decent jokes or one drunken cover of “She Hates Me” if I can get my hands on a karaoke mic. Suffice to say that whatever muse inspired history’s greatest poets decided not to visit me.

But here I am, a few seconds away from making my introduction on a reality television show. Well, it’s a fictional show inside of a video game called SOS. But still, the pressure’s on. The other contestants introduce themselves with goofy impressions. Their avatars gesture and wiggle, miming actions with comedic timing that tease bits of their in-game personalities. Some of them are bringing baggage in the form of backstories. I’m up next and already sweating my two seconds of fame. I want the crowd to love me. I want to win the game.

And then my avatar pops up on the screen for everyone to see. He’s a generic dude with a plain blue t-shirt and his hair tied back in a man bun. I forgot to customize him. I look like a Fear Factor reject. It’s my turn to dazzle my competitors with a few choice words.

My inflection’s off; I sound like an asshole. Within two minutes, SOS has managed to mortify me in front of a digital audience. My character—and me, thanks to my dumb, bassy voice—sounds more like the annoying kid from school who spent a semester abroad, not the cool, collected hero.

Before I have time to wallow in my piss-poor introduction, the game begins. SOS, like most battle royales, takes place on an island. Somewhere, amid ruins and ramshackle villages, are glowing relics. The first three people to secure a relic and evacuate on a helicopter win. I’m gunning for a seat.

SOS might technically be a battle royale game in that it pits players against one another, but playing it feels vastly different from other entries in the genre. Unlike, say, Battlegrounds, it isn’t the best marksman or the savviest tactician who secures an elusive victory. SOS requires a different set of skills altogether. To succeed on this fictional game show, you have to flex you improv muscles a bit. SOS‘s emphasis is on performance, not precision.

I played a few rounds of the upcoming game last week, just before its Early Access launch. It didn’t take long to learn that I’m not ready for prime time, but my in-game debut was enough to leave me wanting more. 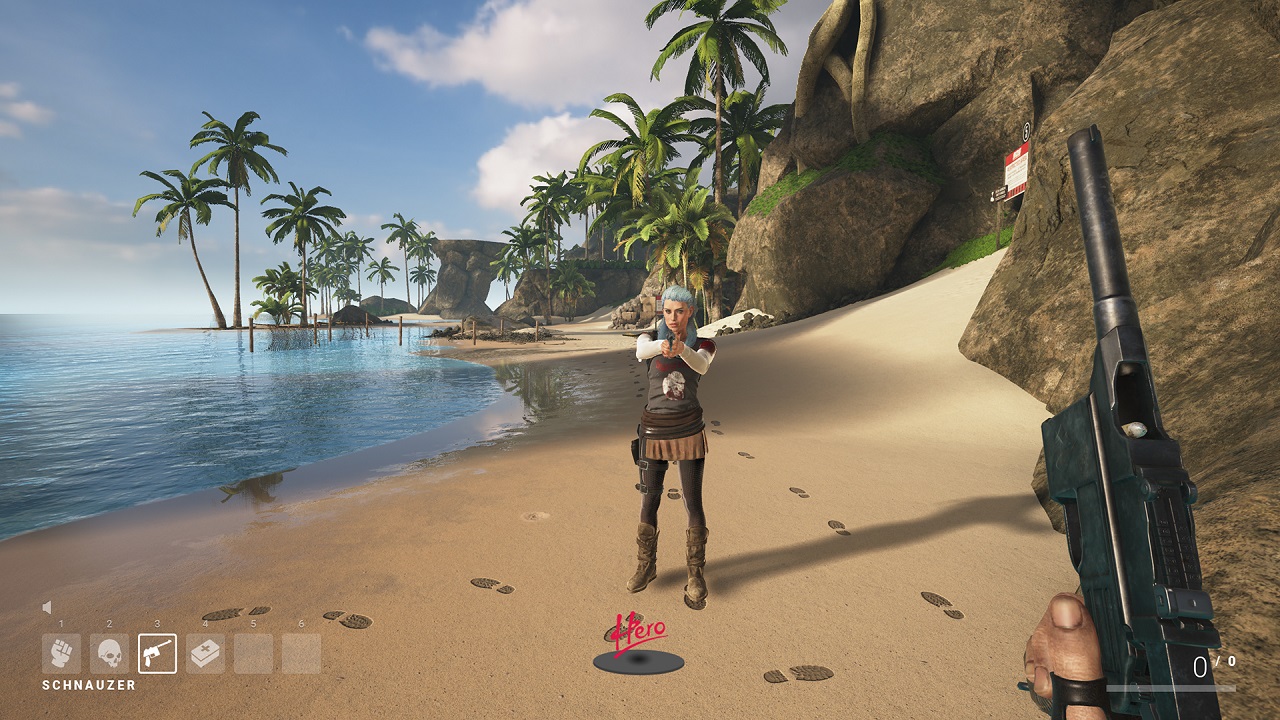 Each match begins simply. All sixteen players start on the island’s outskirts in randomly assigned “lanes.” Paths snake inward, encouraging SOS‘s contestants to move towards the center of the island and the locations that house each relic. Though you start matches alone (a duo mode is also available), the environment’s laid out to ensure that players will bump into one another before long. It’s during these early-game encounters that the performance aspect of SOS begins to shine.

During my first match, I wandered in circles on a beach for a bit. I was able to determine that a temple was a short distance to the north and figured that was as good of a destination as any. I didn’t know what to expect, but after rummaging through a nearby coffer, I found a knife and instantly felt better about my chances of survival.

It turns out I needed the knife sooner than I expected. After a brisk sprint through the jungle, I stumbled upon a monster. It looked like a Vambee—shoutout to Brave Fencer Musashi—with elongated arms and potent claws. We exchanged a few blows, I cursed under my breath in between blocking and slashing, and eventually, I killed it. And then, I heard a voice.

To play SOS, every player has to have a microphone. Your mic audio’s always broadcasting, which allows nearby players to hear you, as well as anyone who might be watching through the game’s accompanying service, Hero.tv, which enables viewers to interact with contestants by reacting to their actions. Open communication channels are the driving force behind SOS, allowing interaction between players and the free-form performances that make up the game’s meat.

“Hey,” the voice said. I spun around, dizzy after my scuffle until I saw a purple-haired woman a few feet away from me.

“Hey,” I replied. I sounded as feeble as my character introduction. 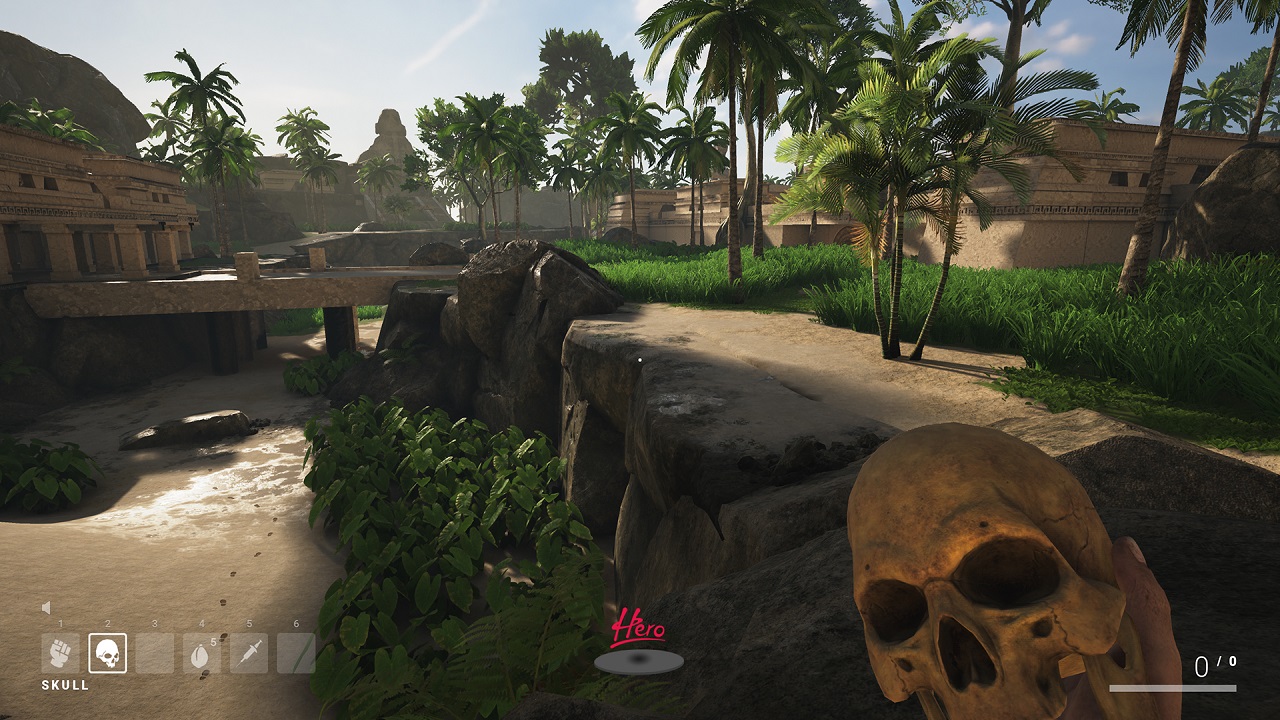 It didn’t take long to realize that wasn’t her first rodeo. She was confident and cheery, a fan favorite in the making. After circling around one another for a second or two, she suggested we team up. I agreed, happy to have an ally, and we solidified our partnership with an in-game high five. Teamwork makes the dream work, and our impromptu alliance increased our chances of finding relics in the monster-infested temple.

Or, at least it should have. As my partner pushed ahead, I got distracted by the shadow of another player in my periphery. Silently—and stupidly, in a game where communication is key—I ran off to see what this stranger was doing. By the time I returned, my partner was gone. I broke my only alliance. I was the weakest link.

I shouted a few “hellos” as I looked for my ally’s method of entry into the temple. I never heard a response, but I did see a broken fence and a path inside. I dropped in, checked my surroundings, and heard an uneasy yelp nearby.

A player, someone I hadn’t seen before, was sandwiched between two monsters. It didn’t look like he’d make it out alive without some help. I shouted that I had his back and prepped my weapon for a few quick strikes. It was my chance to be the hero. Finally.

In my rush to action, I became a murderer instead. The player’s health was already low, and he sidestepped right into the path of my knife. Before I realized what I had done, I heard a muffled “…damn it,” before his mic cut out. He was dead before I could even apologize. 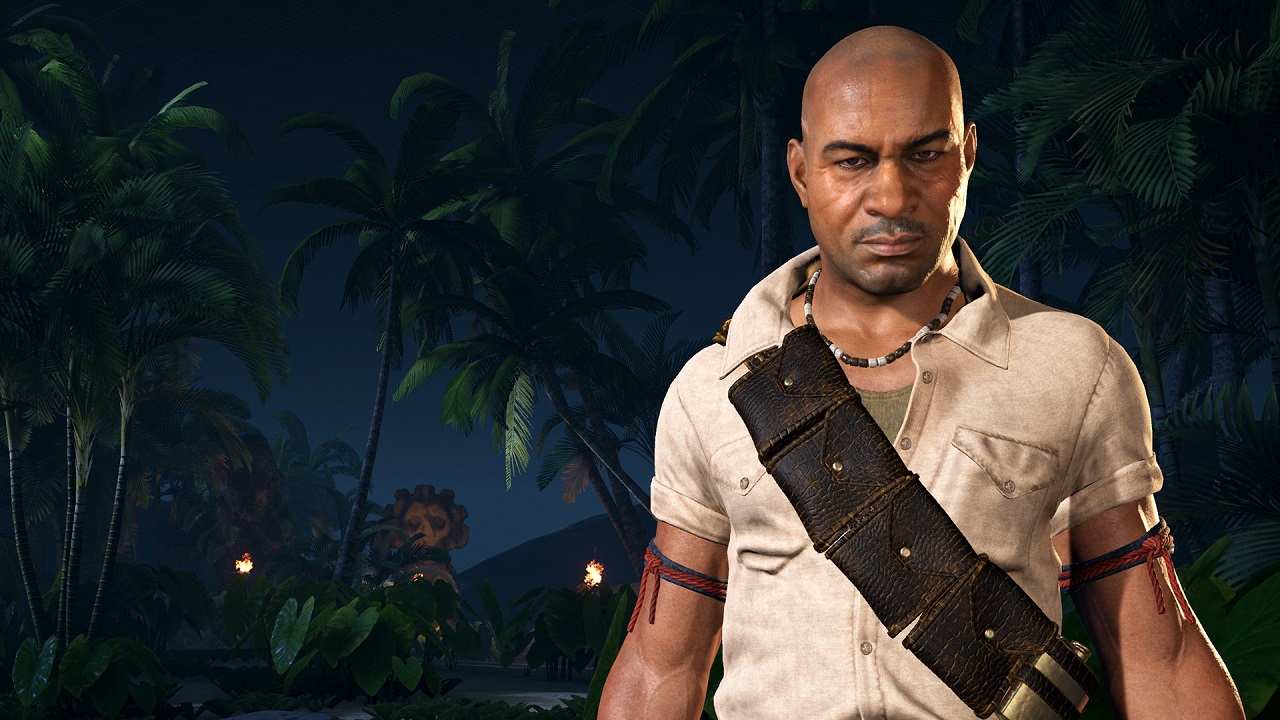 I wish I could say I went on to reunite with my former partner, or that I pushed on to win in memory of the man I accidentally killed. That would make for good TV. The truth is much more fitting, though. Less than a minute after fleeing the scene of the crime, I entered a dark chamber where I was mauled to death by a monster. As far as in-game debuts go, mine was as awkward as it gets.

But while my story was relatively tame, spectating the rest of the match was a dynamic, exciting good time.

Because SOS‘s fiction places players on a reality game show, spectating matches is just as entertaining as participating. Once I was dead, I was able to watch the remaining contestants as they role-played and double-crossed one another. I witnessed an alliance of three players—all speaking with different accents—enact a plan to steal two relics. They argued and laughed at one another’s bits, seemingly oblivious to the fact that their antics had drawn a modest number of viewers.

The improvisational aspect of SOS can’t be understated. Natural-born performers can become digital stars within the game’s fiction. Because it’s designed to encourage an active audience, staying self-aware and in character can bolster your ability to survive and thrive. Players can build a following who actively participate in each match. Through Hero.tv, remote viewers can react to the action they’re watching, or vote on the contents of care packages contestants receive. Reactions build reputation and Fame, invisible boons tied to a player’s rank, that reward dynamic play and audience interaction. One player, who fully committed to a wise-guy persona, became an instant crowd favorite because of his quips and relentless scheming. Social dynamics are a vehicle for success both as a player and a performer, which speaks to SOS‘s massive potential among the streaming audience.

For someone like me, a bumbling buffoon who accidentally kills any player he gets too close to, SOS provides a chance to break out of my shell. Though it’s a bit rough around the edges, the base game is simple enough to learn after a session or two. I can see myself throwing my reservations by the wayside and developing an in-game persona. There’s untapped potential for hijinks and nuanced role-playing under SOS‘s game-show facade. Like any self-respecting reality television star, I’ll be back until I wear out my welcome. The camera doesn’t love me yet, but no one can resist an underdog.